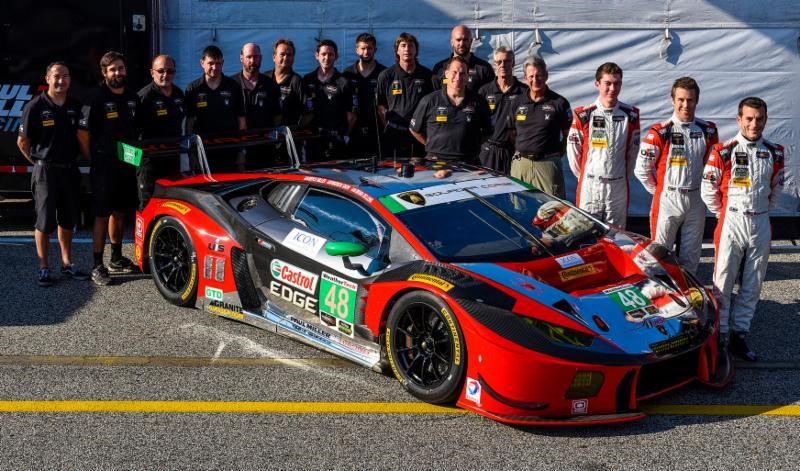 PARSIPPANY, N.J. (November 8, 2016) – Paul Miller Racing will return to the 2017 IMSA WeatherTech SportsCar Championship with the same driver, crew and race-car package the No. 48 Lamborghini Huracán GT3 team drove to one race victory and third-place in the IMSA GT Daytona (GTD) championship standings this past season.

Full-season drivers Bryan Sellers and Madison Snow return in 2017 to Paul Miller Racing for a second-straight year in the team’s No. 48 Lamborghini Huracán GT3, which produced the majority of the on-track success for the Italian manufacturer in its first year of IMSA competition this past season.

Bryce Miller is also back in 2017 as the team’s third driver in the four-race Tequila Patrón North American Endurance Cup while a fourth driver from Lamborghini’s lineup of factory works drivers will join the No. 48 team for the Rolex 24 At Daytona.

“This past season was all about growing together as a team and building what has become a great partnership with Lamborghini,” said Paul Miller Racing Team Owner Paul Miller. “When we arrived to start the year in Daytona, we had undertaken more changes than we ever had before as a team, with two new drivers and a brand-new race car, so to see where we ended up at the end of the year’s 12 races was incredibly satisfying.”

After rebounding from a competitive but challenging Rolex 24 At Daytona with a sixth-place finish at Sebring and seventh at Laguna Seca, the No. 48 team first showed a sign of things to come in Round 4 at Detroit.

Sellers won the pole on the Motown street circuit – the first for Lamborghini in IMSA competition – and two races later he and Snow co-drove to a third-place finish at Mosport in Canada to give Lamborghini its first IMSA podium result.

“There are so many positives to the team continuing in 2017, it’s difficult to pick which one to begin with, but first and foremost I think it is important to thank Mr. Miller for making this all happen for yet another year,” Sellers said. “Madison and I really jelled over the course of the season and I really enjoyed my time with him. It will be great to be back with someone I know so well and build on that continuity.”

Snow picked up Paul Miller Racing’s second pole of the season in August at VIRginia International Raceway (VIR) where the No. 48 team broke through for a dominating weekend that produced Lamborghini’s first IMSA race win.

“Working with the same team that we were all a part of last year allows everyone to feel much more comfortable and confident around one another,” Snow said. “That is something that just takes time and trust. We gained massively in all of those categories as last year progressed and improved enough positions to allow us to fight back for third-place in the championship.”

The No. 48 team followed up the VIR win with a second-place finish one race later at Circuit of The Americas (COTA) and sealed the championship podium with a fourth-place run in the season-ending Petit Le Mans race at Road Atlanta.

Third place in the final championship standings was the highest Paul Miller Racing ranked in the 2016 GTD title battle all season.

Paul Miller Racing is the only IMSA GTD team to earn a top-three championship finish in each of the three years the class has been existence. The No. 48 team finished second in the inaugural GTD season in 2014 and third in both the 2015 and 2016 championships.

Bryce Miller was a team driver in all three championship-podium efforts and will be the team’s primary endurance race specialist for the third-straight year in 2017.

Next up for Paul Miller Racing is IMSA’s traditional November test at Daytona International Speedway, November 15 – 16.

“I definitely believe we can pick up right where we left off,” Snow said. “If we had a year or more off then it would be a little different, but there really is no off season in sports car racing with the many tests in between Petit and Daytona.”

Sellers expects everyone to get right down to business next week in Daytona in what truly is the first important group test of the 2017 WeatherTech Championship season.

“The continuity brings an important role into the program because you know what to expect and what is expected of you,” Sellers said. “We don’t have to beat around the bush with any items. We can speak our opinions, take them positively and know we are all trying to move in the right direction.”

– Paul Miller Racing’s continuity and familiarity has another big benefit in a critical area of the team’s off-track operations. “Ultimately, the biggest part of this is we don’t have to discuss where we have dinner anymore,” Sellers said. “I know what Madison likes to eat and vice versa. It relieves a whole amount of unneeded pressure!”