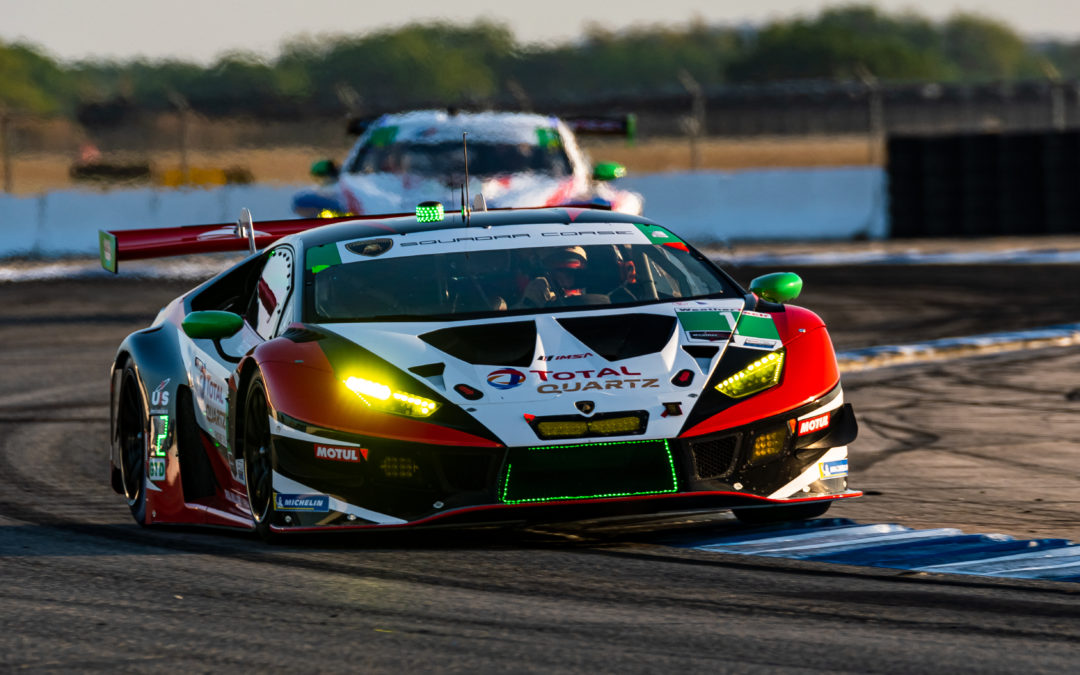 SEBRING, FL (Saturday, March 20, 2021) — After having one of the strongest cars during the 2021 12 Hours of Sebring, Paul Miller Racing leaves Florida empty-handed after a knock-on effect from contact ultimately ended the team’s day early.

Starting from the sixth spot in the IMSA WeatherTech SportsCar Championship GTD class, the No. 1 Lamborghini Huracan GT3 drivers of Madison Snow, Bryan Sellers, and Corey Lewis methodically worked their way through the field to the lead for much of the first third of the race.

Looking set to score second place points at the four-hour Michelin Endurance Cup check-in, the Total lubricants-backed machine was spun by the several-laps-down No. 99 Porsche, dropping them down to the last car on the lead lap.

Replicating their successes from the opening hours of the race, the team fought hard, executing on every pit stop, running strong on track, and timing their stops with the cautions to get back out in front of the field at Sebring.

However, it was the earlier contact with the No. 99 that ultimately ended the Paul Miller Racing team’s day, causing a gearbox problem that slowly became terminal during the course of the race. 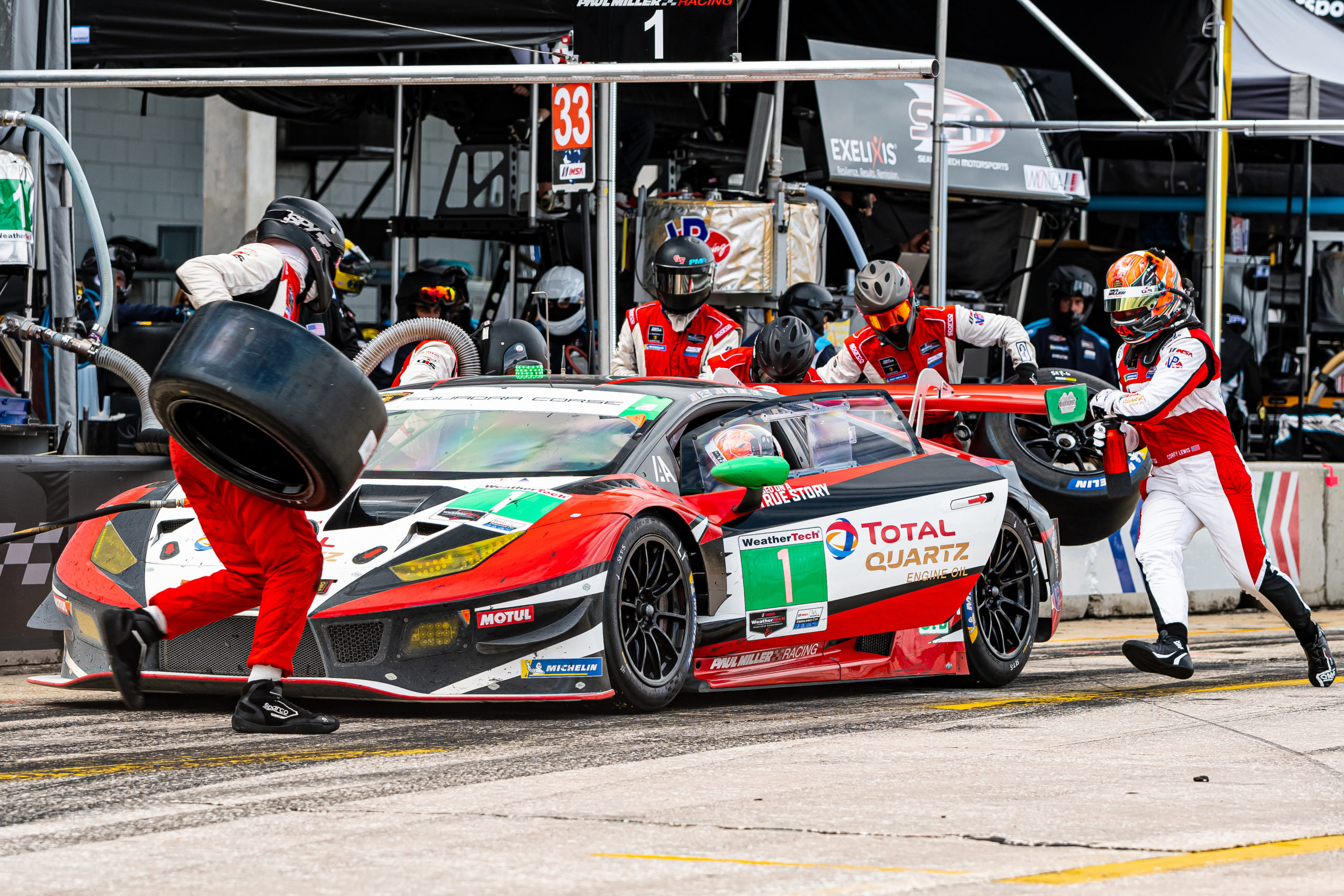 “I thanked each and every one of our guys because they did a tremendous job not only preparing this car but also in this race with the pit stops. We had some fantastic stops today. It’s just incredibly disappointing, and I think everybody feels it.

“We’ve never had a gearbox failure in the six years we’ve been with Lamborghini. This was a brand new gearbox; there really isn’t any reason this would have happened without the contact we suffered early in the race.

“I really feel bad for the whole team, everyone has been working so hard. We managed to catch back up after the incident, but to lose the race because of it is incredibly disappointing.”

The IMSA WeatherTech SportsCar Championship will return to action at the Mid-Ohio Sports Car Course on May 14-16 for the first round of the IMSA Sprint Cup and fourth race of the 2021 season.

Madison Snow
“Leading up to the race, practice was difficult, qualifying was difficult, but by the time we got to the race, the car was so much better. We showed we had pace out there and that we could not only battle with the leaders, but be the leaders for a good portion of the race. We never had the race in hand or anything, but we were always competitive, we were always in the picture.
“It sucks when you have something like this that takes you out. But, we can be proud of how far we came this weekend through practice and qualifying to make the car as good as it was during the race.”

Bryan Sellers
“Days like today are incredibly hard. I can’t even remember having a failure since I’ve been a part of Paul Miller Racing, so to have that kind of streak is really impressive. The worst part is that this is something that was out of our control. You feel so bad for everybody, they all put so much effort into these races.
“The week started out pretty rough, we weren’t happy, the car wasn’t fast, there was a lot of complaining from the drivers. But everyone stayed on it, and we obviously made some really good improvements going into the race. We led a lot of laps and I think when it came down to the final two or three hours we were in a really good position to fight for a podium and potentially a win.
“It’s just a big blow. We were resilient all week; we never gave up; we kept looking for a better balance, for better handling, a quicker race car. We got there in the end. But the only thing we can do now is move on to the next round.”

Corey Lewis
“Overall, throughout the race the car just kept getting better and better. Unfortunately, early in the race during one of my stints, we were battling hard for the lead and we were hit from behind by the No. 99 who was laps down.
“We had to battle back from trying to stay on the lead lap and fortunately we caught a mid-race yellow that helped cycle us right back to where we were before—up front. The three of us, Madison, Bryan, and myself, we pushed really really hard, and we showed really good pace.
“But, at the end of the day, there’s nothing we could have done. That’s the highs and lows of motorsports. Sometimes the gods are on your side, and sometimes they’re not. Ultimately, I’m proud of everyone on this Paul Miller Racing team, they worked really really hard all weekend, and it’s unfortunate we weren’t able to finish where we wanted to.” 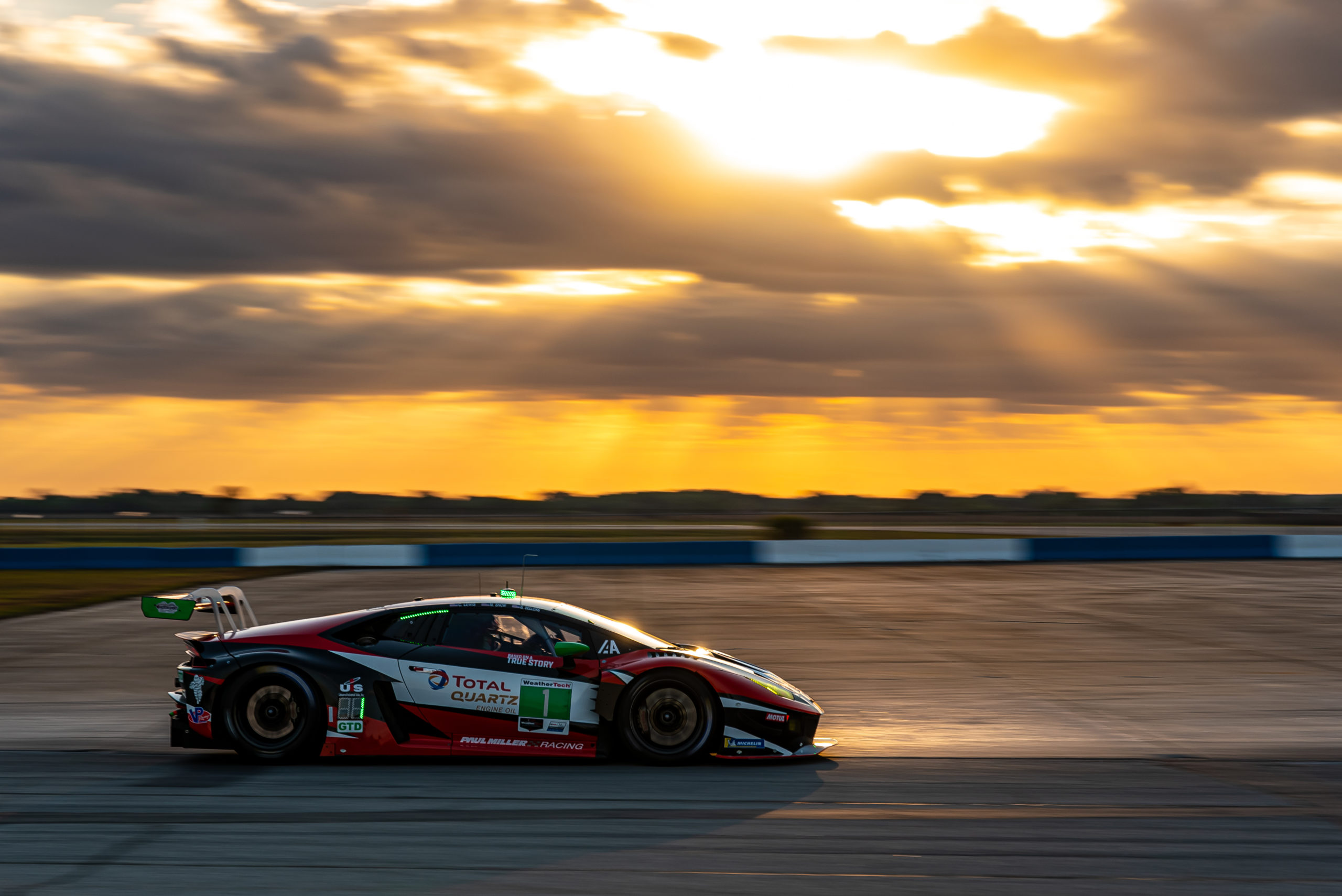