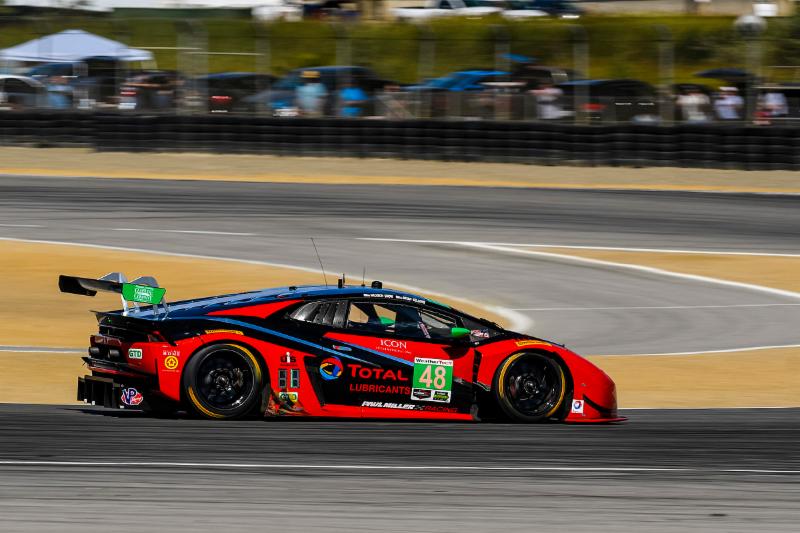 MONTEREY, Cal., (September 23, 2017) – After clinching pole position Saturday morning, Paul Miller Racing looked to be a strong contender on Sunday’s America’s Tire 250 at Mazda Raceway Laguna Seca. Despite the high hopes and strong pace, the team suffered contact early on, and fought a hard race to finish seventh in the No. 48 TOTAL Lubricants/UIS Lamborghini Huracán GT3.

Pole sitter Madison Snow led the field to green, but as the GT field roared into the opening corners of the 11 turn track, a GTLM car in front of Snow immediately slowed, resulting in contact. The Lamborghini suffered heavy damage to the front driver side corner, but was able to continue and gain a three second gap on the rest of the GTD field. When the hood of the No. 48 opened as a result of the earlier damage, Snow was forced to pit from the lead for repairs. After also taking fresh tires and a full tank of fuel, Snow rejoined at the rear of the field with over two hours left in the event. Quick work of the crew brought Snow out eight seconds in front of the leader, keeping the No. 48 Lamborghini Huracán GT3 on the lead lap. Despite the previous damage, Snow showed strong speed, quickly increasing the gap over the leader from eight seconds to 21.

The first round of pit stops cycled through, moving Snow up to 13th with 45 minutes complete. As the rest of the field completed their mandatory driver change, Snow stayed in the car, working his way up to sixth. Bryan Sellers took over with roughly 100 minutes remaining, setting the fastest laps of the race for the GTD field. He clawed his way back into the top ten, until a full course caution and full field pit allowed Sellers to move up to second position. After the field went back to green, Sellers pitted for tires and fuel, rejoining in 13th. From there, the field settled in, and Sellers climbed to fight for a top ten position in the final hour. Taking a gamble on fuel strategy, five cars in the field pitted in the final laps, moving Sellers and the No. 48 up the field to finish seventh.

Paul Miller Racing will close out the 2017 season at Road Atlanta for the 20th Anniversary of the Motul Petit Le Mans, October 4-7. Trent Hindman will join Bryan Sellers and Madison Snow for the 10 hour endurance event, sharing the driving duties for the No. 48 Lamborghini Huracán GT3. The broadcast for the finale event will run on FOX Sports 1 from 10:30AM to 11:30AM Eastern, then switch to FOX Sports 2 from 11:30AM to 2:30PM. There will be a 90 minute gap and coverage will resume at 5:00PM and go to the finish at 9:30PM. For more information, visit imsa.com.

We had speed in the car and could run a good race, but we made a couple mistakes. In the middle of the race, we had a loose wheel, and then a mechanical issue at the end of the race. There were a couple of opportunities we missed out on. Hopefully we can put it together for Petit Le Mans and be able to race everyone there.

It was a very difficult day for us, which I think is unfortunate. We had a great race car, and the balance was very good through the entire stint. Tire degradation was a large part of today’s race and we had a car that could go the distance, and run good lap times for the entire stint. We had some bad luck today, and it just snowballed. We could never get back on the right foot we needed to be on to charge through the field. On a positive side, the speed was good, and every time adversity struck, we rose to the occasion. We have one more race left. We need to sit down and figure out why some of the things happened, fix them, and try to address them for the next race. We’ll see if we can go out for a podium at the end.