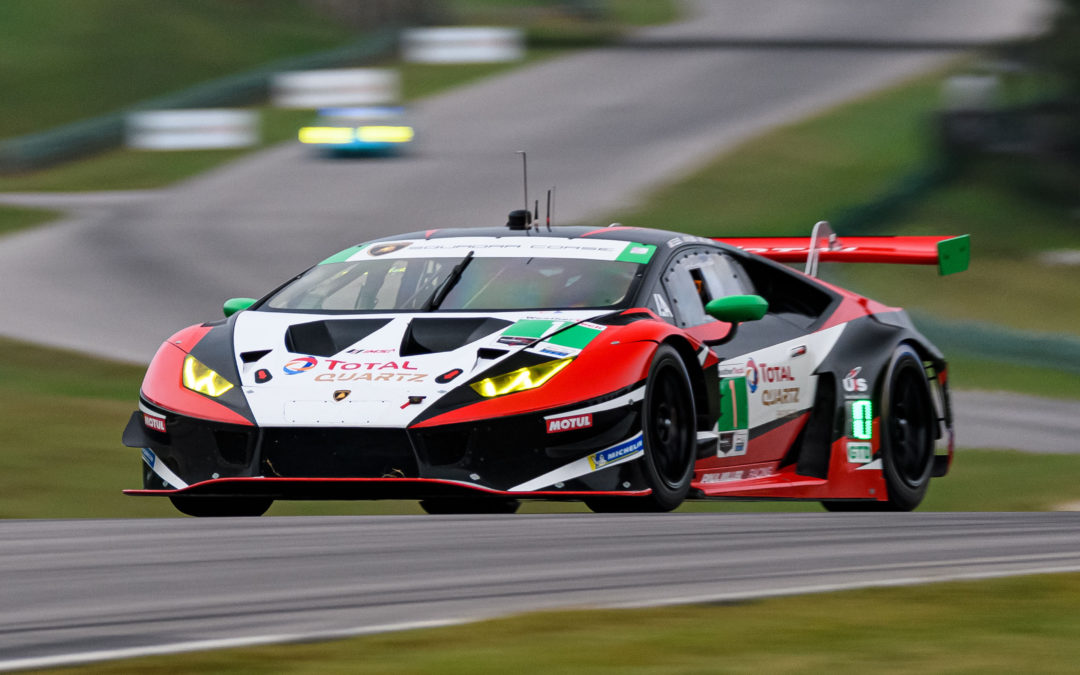 ALTON, VA (Friday, October 8, 2021) — Paul Miller Racing will start on the front row in the IMSA WeatherTech SportsCar Championship GTD class for the GT-only round at VIRginia International Raceway.

In the hands of position-qualifying driver Madison Snow, the No. 1 notched its second consecutive front row start in IMSA competition. Last race at Long Beach, the team was able to convert that front row to a victory; however, the predicted weather at VIR for tomorrow’s two-hour, 40-minute race is a far cry from the sunny skies of Southern California.

In championship points qualifying, Bryan Sellers scored the fourth-fastest time, a result which helped Paul Miller Racing narrow the gap in the overall GTD points standings to the No. 9 car ahead.

The result comes on the heels of the team missing a majority of the first practice to an electrical gremlin, limiting their already limited amount of on-track practice.

“We had so little track time to get the car set up today, and we just had to go out there and give it the best we had. We know there are other things we can change to make the car faster for tomorrow’s race, but with the predicted rain, it’s anybody’s race.

“Obviously, starting from the front row in the rain is always an advantage, as hopefully it can keep you ahead of any issues further back in the pack, but we’re not counting any chickens before they hatch! It’s going to be a hard-fought race for everyone.”

Madison Snow
“We had very little practice time going into qualifying—and IMSA doesn’t give us a whole lot to begin with. We had some issues in the first practice session with an electrical problem. But, after practice two we were able to sit down with the team, go over the car, and Bryan really helped me go overdriving the lap. He definitely helped me. Without him, I wouldn’t have been able to get that lap in this qualifying session. I think we all really came together and figured out what we needed to do to get the best result we could. We almost got it done! I think we did a really really good job, but to be so close to pole and miss out is a little bit of a bummer, but I’m so proud of what we accomplished today.”

Bryan Sellers
“I think we made some really good decisions after practice two for the qualifying. And, I think Madison did a really great job in the first qualifying session. It was super tight in my qualifying session—whenever you miss practice, you’re kind of on the back foot—but qualifying as well as we did kind of puts us back on a level playing field with everyone else for tomorrow’s race. We’ll make a few more small adjustments for race pace and then keep an eye on the weather to make sure the adjustments we make keep us in the window. But I’m pretty happy with where we are! We have a car that can race, and so now that’s what we have to go and do.”

Corey Lewis
“Cannot wait to finish out the 2021 season with the gang! It almost feels like 2018 all over again, and hopefully, we leave Petit with the same result. The guys have worked extremely hard and have found themselves well and truly in the hunt for the championship. I can’t wait to get back behind the wheel and get to work with Bryan and Madison!”