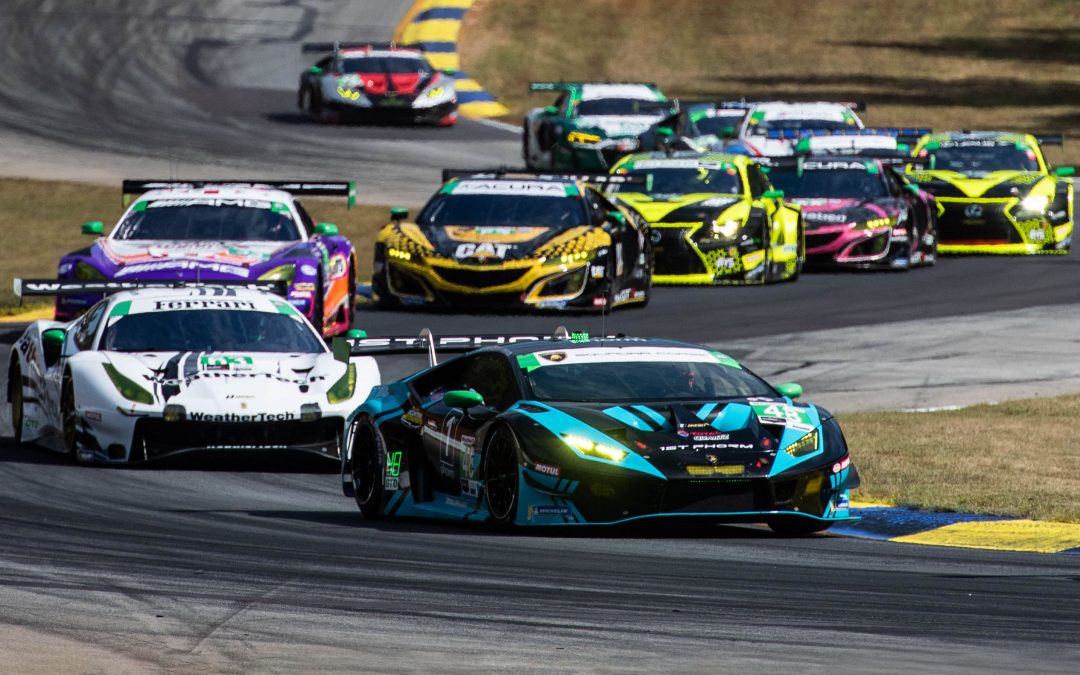 Sellers crossed the line in sixth place, but it was a late-race pass with only 13 minutes remaining that turned the tide for the Italian manufacturer.

Lamborghini entered this weekend with a single point lead in the manufacturer’s title over Acura. With 13 minutes remaining, Sellers, aboard the 1st Phorm / Total Lubricants-sponsored Lamborghini Huracan GT3, made the vital pass on his I-PACE eTrophy teammate from this year, Katherine Legge’s Acura to seal the crown at turn 10.

The manufacturer’s crown is the second consecutive championship win in a row for Lamborghini.

Sellers, Corey Lewis and Marco Seefried, started from pole and had a strong race throughout the 10-hour battle at Michelin Raceway Road Atlanta.

The trio led ?? laps during the first half of the race, but an unluckily-timed pit stop and a safety car put the Paul Miller Racing squad down a lap compared to its GTD rivals. Corey Lewis was also forced off track in the esses by a prototype but managed to regain control without damaging the car.

“We’ve had a lot of challenges this season, but I’m really thrilled for Lamborghini that we were able to help them take the manufacturer’s championship,” Paul Miller Racing founder, Paul Miller, said.

“Getting the win at the last round at WeatherTech Raceway Laguna Seca and then chasing down the Acura here today was really terrific. Back-to-back championships for Lamborghini show how good this car is. Now, we’re setting our sights and getting Paul Miller Racing back in title contention again next year.

“I have to express my thanks to all the team at Paul Miller Racing – the crew, the drivers, everyone involved in putting the No. 48 on track each week. We are now counting down the days until we’re back on track in Daytona.

“We’d be remiss if we did not thank Ryan Hardwick and his Mountain Motorsports group, 1st Phorm and Total Lubricants for enduring this up and down season with us!” 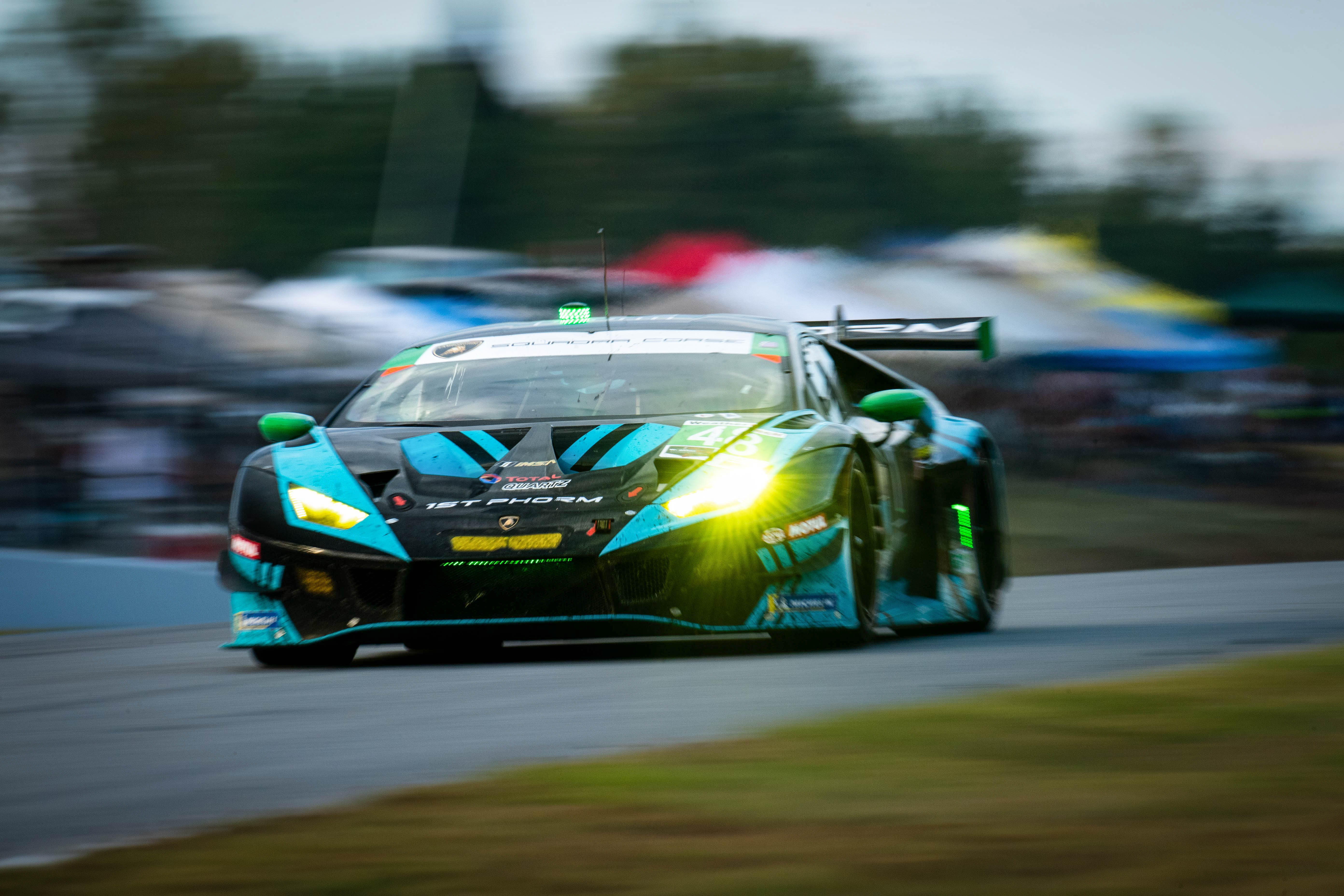 Bryan Sellers
“The goal for today was to be able to secure Lamborghini the manufacturer’s championship and although it was difficult to do, we were able to do it at the end of the race.
“We had some unfortunate circumstances in the middle that basically took us out of podium contention and we waited for a yellow flag all race and it just never came, so unfortunately we were not able to get ourselves back in the fight.
“We had a race car that was capable, had enough speed to finish on the podium but at the end of the day the goal we had set for ourselves was accomplished.
‘We’re happy to be able to contribute to Lamborghini’s second manufacturer’s title and looking forward to a good year next year.”

Corey Lewis
“It was a long ten hour race and we had our ups and downs, I think we had pace to be toward the front as we showed all race long, but ultimately at the end we were able to clinch the manufacturer’s championship for Lamborghini and that was their main goal going into this race.
“So we checked one box off the list which was great. Ultimately we put our best foot forward and we just got caught out a little on the yellow (flags) and we couldn’t get the yellow back to get that lap back.
“It’s been a heck of a year, I’m proud of the whole Paul Miller organization, massive thanks to 1st Phorm, Lamborghini and Total and on to 2020.”

Marco Seefried
“We expected a bit more, we failed at one pit stop which put us a bit behind to where the 96 car was so that held us up a bit.
“But in the end we were good. That BMW was quite strong today, it was hard to beat, then the 33 unfortunately for them they ran out of fuel and they were sure to make the podium.
“I’m really glad I was here and being part of Paul Miller Racing and looking forward to the future and another race with the team.” 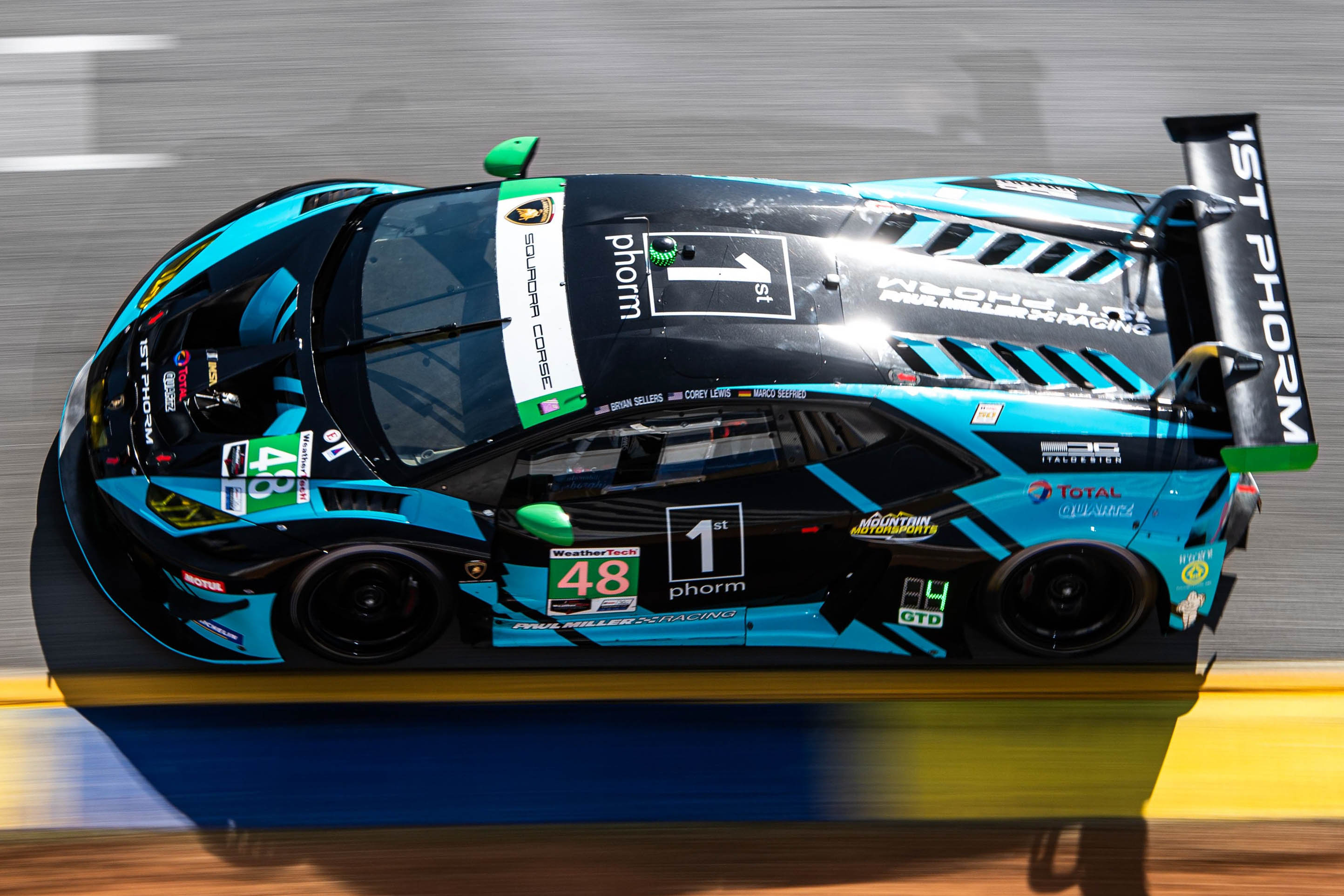 It was a hard-fought battle, but after 10 hours, @CoreyLewis39 and the Paul Miller Racing team managed to clinch the manufacturer’s title for @Lamborghini in the No. 48 @1stPhorm / @TOTALUSA machine. pic.twitter.com/9xsAWKLNta