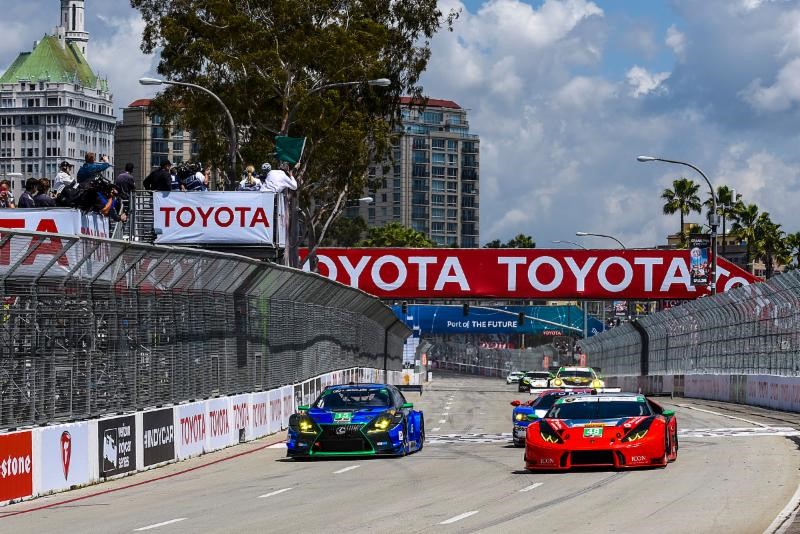 The team had showed a continued improvement in the first two races of the season, the Rolex 24 at Daytona, and the Twelve Hours of Sebring. When the No. 48 Lamborghini Huracán hit the track this week on the streets of Long Beach, California, drivers Bryan Sellers and Madison Snow showed strong speeds in the IMSA GTD class. Sellers ran a perfect qualifying session, earning pole position on Friday in a highly competitive field.

Sellers led the field to green Saturday afternoon under clear weather conditions. A full course caution came out after the opening lap, and Sellers stayed on track, leading the GTD field back to green. A second caution came out at the 17 minute mark, and while the majority of the GTLM and GTD field made their mandatory pit stops and driver changes, the No. 48 Lamborghini Huracán stayed on track. As the field went back to green, the team called Sellers into pit lane, where the car received a full service pit stop. Madison Snow took over and rejoined in sixth, only to be called into pit lane for pitting under caution. At the time the car entered pit lane, the track and pits had yet to be declared green, resulting in a stop and hold penalty.

Snow rejoined at the rear of the field, and as is typical with street courses, contact and cautions played into the final results for many of the competitors. While the No. 48 Lamborghini showed an impressive run all week with blistering lap times, the attrition filled race resulted in a 16th place finish in class.

Round Four of the IMSA WeatherTech SportsCar Challenge takes place at Circuit of the Americas in Austin, Texas, May 4-6.

Unfortunately, it was not the day we were looking for. Sometimes it goes your way, and sometimes it doesn’t. Today was not our day. That’s all we can do. We had a great effort, and it is true to say you win and lose as a team. We have to go back and look at what happened and make sure it doesn’t happen again. I think we also have to look at the positives. We had a good car, sat on the pole, so it was a good weekend up until it wasn’t. We’ll look at what we have to do and get better for the next one.

We had a rough penalty at the beginning of the race. Bryan was quick, the car was quick and he had a good gap out front. I got in the car, and the car was great. We were pushing, then got the penalty. We had a good car and a lot of speed in the car. We have the set up right, but it makes it more disappointing to know we had such a good car for this race. We’re looking forward to coming back and doing this race again. We learned some set up things that we will implement for future races so that Bryan and I will be even more comfortable with getting it to the top.

Paul Miller
We had a very strong car and had nailed the setup, which was a big positive! We also had a good strategy working, but made a basic error from the pit stand. Communication from race control was confusing to us, but we ultimately have to take responsibility for our error. It’s a shame because the TOTAL Lamborghini was poised for an excellent result!