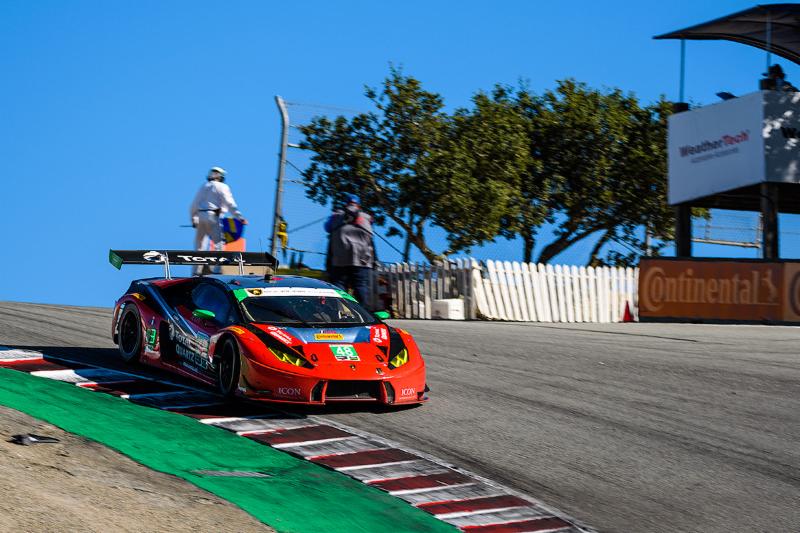 MONTEREY, Calif., (September 10, 2018) – Sunday afternoon at WeatherTech Raceway Laguna Seca, Paul Miller Racing put forth an incredible display of driving expertise and strategy execution to finish in fourth place in the Continental Monterey Grand Prix. Co-drivers Madison Snow and Bryan Sellers endured a chaotic race to defend their points lead over the No. 86 Acura. Heading into the final round at Road Atlanta, Paul Miller Racing holds a six point lead for the IMSA WeatherTech SportsCar Championship.

The Continental Monterey Grand Prix was anything short of boring, with the excitement beginning at the drop of the green flag. As the field roared to the starting line, contact between two prototype cars started a chain of events leaving several crashed cars and a field of debris for the GTD field to maneuver through. Starting in second place, Madison Snow cleared the debris to restart in place behind the No. 86 Acura of Katherine Legge. The green flag racing was short lived, as contact in the GT field brought out the second full course caution of the weekend. Madison Snow took the class lead as Legge shuffled back to fourth position behind Patrick Long and Jeroen Bleekemolen. After 30 minutes of yellow flag laps, the field again went green, and Snow immediately was under pressure from the No. 58 Porsche of Patrick Long. A three way battle for the lead commenced, and Long claimed the position after the following caution and restart, shortly after Snow reported contact from behind from Legge. She was able to get by the No. 48 Lamborghini, moving Snow to third place, 52 minutes running.

Kyle Marcelli also took advantage as Snow reported a loss of grip on the 2.238 mile road course. He closed out his stint in sixth place, pitting the No. 48 for fuel, tires, and a new driver. Bryan Sellers took over and joined the field in ninth, right on the heels of the No. 58 Porsche, with Christina Nielsen behind the wheel. Fate played into the hands of the No. 48 when the Turner Motorsports BMW stopped on course, bringing out another full course caution.

Sellers pitted from 11th place, and a rapid tire change from the team in pit lane gave back the No. 48 three positions back to restart in eighth behind Townsend Bell’s Ferrari. Sellers took the green flag and immediately had to defend position from the No. 44 Audi of Andy Lally. Sellers expertly defended position, and pushed forward to pass Gunnar Jeanette’s Ferrari to claim fifth place. Running lap times on par with the leaders, Sellers charged forward, also passing the No. 14 Lexus of Dominik Baumann.

With 45 minutes remaining on the clock, Sellers found himself in third place, within 9.7 seconds of the class leader, and main championship opponent, the No. 86 Acura of Alvaro Parente. The strategists in pit lane called Sellers into pit lane for the final stop with 37 minutes to go. With fresh tires and a splash of fuel, the No. 48 was ready to race to the end. The No. 86 pitted shortly after, but a longer stop allowed Paul Miller Racing to pass the former race leader before they could exit out of pit lane. Less than a half hour remained on the race clock as Sellers sat fourth, with Parente eight seconds behind. As Parente closed in on Sellers, the Paul Miller Racing Lamborghini reeled in the No. 33 of Bleekemolen. After over two hours of intense racing, the top four cars in the GTD class ran nose-to-trail, with two seconds separating first place from fourth place.

In the end, the final battle came down to Balance of Performance and tires, and Bryan Sellers put in his strongest drive all season and brought the No. 48 Lamborghini Hurcan GT3 in fourth, missing out on the podium finish by just 0.4 seconds. The No. 86 held a strong advantage and finished first, closing the points gap from 13 to six points.

The battle for the IMSA WeatherTech SportsCar Championship GTD title will conclude next month at Road Atlanta’s Petit Le Mans, October 10-13. Thirty-five points remain up for grabs at the final event of the season, hosted at Paul Miller Racing’s home track. The team has held the points lead since March, winning nine top-five finishes in ten races this season. The ten hour endurance event will air live on FS1 from 10:30AM to 12:00PM ET on FS1, and 12:00PM to 9:30PM on FS2. For full event information, visit imsa.com.

Madison Snow
Coming into this weekend, we knew it was going to be a difficult one for us. The competition is super tough here at the end of the year. We’re trying to conserve points and get a gap going into Petit Le Mans. We didn’t gain anything, and we lost some points. However, we’re still in the lead and have a gap over the No. 86, and that was the goal. It is difficult being out there and knowing we have to run a clean and conservative race due to the fact that the end of the year is so close. That’s the nature of the beast when you’re holding on to the championship points. Bryan did a great job out there at the end, keeping ahead of all those cars and fighting through the pack. It was a difficult task with the car that we had, and he was able to work his way up.

Bryan Sellers
Today was a tough day. We ended up with a good result, but it was difficult. We felt like we had a strong car, but when it came down to it at the end, we fell a little short. The No. 86 car was very strong, and we didn’t have anything for them. It was difficult to watch them pass and not be able to do anything about it, but we still came out with a little points loss, but still in the lead. We have our work cut out for us looking ahead, because we aren’t the quickest car. We have a great program and that’s what matters. The guys put us in a position to be able to take points home, so it’s hard to be disappointed after that drive up through the field. Madison did a great job during qualifying and we executed well. So on to the next on.