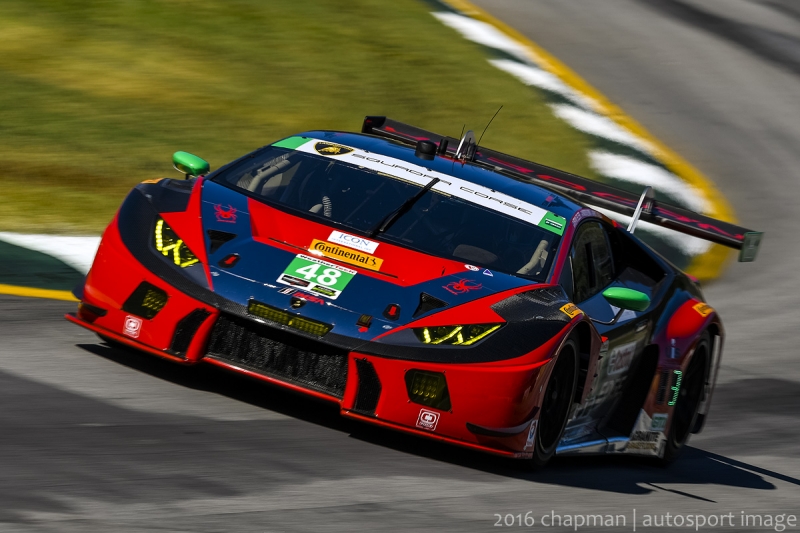 BRASELTON, Georgia (September 30, 2016) – Paul Miller Racing and team driver Madison Snow qualified seventh Friday for tomorrow’s Petit Le Mans in which Snow and co-drivers Bryan Sellers and Bryce Miller will be shooting for the team’s second win of 2016 and second victory in three years in the 10-hour season-ending race at Road Atlanta.

Petit Le Mans is scheduled to go green at 11:10 a.m. EDT tomorrow, Saturday, October 1, with coverage on FOX Sports 1 (@FS1) at 11 a.m. EDT kicking off continuous live programming of the 10-hour race throughout the day on @FS1, FOX Sports 2 and IMSA.tv.

Snow turned a top lap time of 1:22.143 in the No. 48 Paul Miller Racing Lamborghini Huracán GT3 to lock down the inside row-four starting spot. The lap was well within a second of the GT Daytona (GTD) class pole winner, and Snow and the three cars in front of him on the grid are within a scant 1/10th of a second of each other.

“It’s just a super tight field out there,” Snow said. “I went out there and two of my quick laps were the same time, so once I saw that I knew I wasn’t going to gain a whole bunch to get pole. For me it was kind of go for pole or get down a good lap and come in to save the tires.”

The Paul Miller Racing team plans to make a few more changes to the No. 48 before tomorrow’s race.

“I think we are in good shape,” Sellers said. “It has been kind of difficult because the track and weather conditions have been so up and down. It’s hard to predict exactly where we need to go, but given the overall picture we are doing well. Now, we make a few small changes and we go race, and that is basically what this one is all about. You get close and then you let the race unfold and see what happens. I think we are fine. We are in a good position to be able to get to the end and fight at the end.”

“I am pretty excited for the race tomorrow,” said Bryce Miller, who now competes only in endurance races. “I think we have a front-runner car, definitely worthy of a podium. It is great to be here at this event when the team is experiencing so much success in the last races. The morale on the team is strong as a result of the recent success, and I think that is important, especially for this race.”

Paul Miller Racing has scored four top-five finishes in the last five IMSA races – including a victory last month at VIRginia International Raceway – that have moved the No. 48 team and drivers into contention for a top-three finish in the 2016 GTD championship.

Sellers, Snow and the No. 48 are fourth in the GTD team and driver standings with 264 points. While the leading Ferrari team will clinch the 2016 title early in tomorrow’s race, the No. 48 team trails the third place team and drivers by a point, and are only three points out of second place.

A 20-minute warmup session at 8:40 a.m. EDT Saturday morning will give the No. 48 team one final shot at trying some pre-race adjustments.

“We are still working hard on trying to get the car perfect for the race,” Snow said. “It has been difficult with the changing temperatures conditions. There’s a lot of variables at play that just need to kind of balance out. We have car that we can fight with and that we can race. Now it’s just a matter of making it easier for us to drive it and more comfortable for us to get that quick lap out of it.”