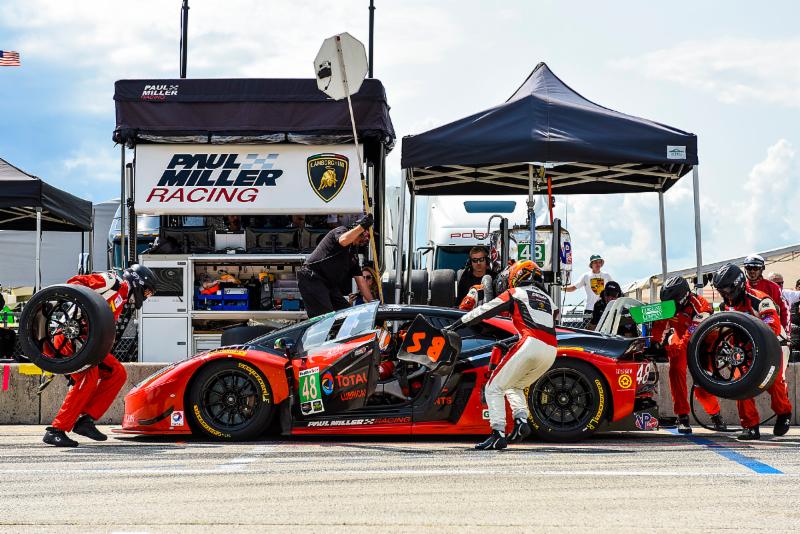 Thursday’s set up day underwent long delays, after torrential downpour and lightening in the area prohibited all competitors from unloading their transporters on schedule. Friday’s two practice sessions were inflicted with mild storms and temperatures in the 50s. The IMSA WeatherTech Sports Car Championship field completed the two sessions, but with overall set up changes that would differ greatly from the following day. On Saturday, the paddock received yet another weather curveball, with clear skies and warm temperatures, requiring a drastically different set up for each car in the field. Sunday mercifully produced clear, sunny skies for the race, allowing the teams to find a consistent setup for the race ahead.

Paul Miller Racing utilized the most out of the final practice session, working with the feedback of drivers Madison Snow and Bryan Sellers to continue in the direction best suitable to set a fast lap in the afternoon’s qualifying session. Snow’s first three laps put him on the provisional pole position, but by the end of the session, the competitors found additional speed, settling the No. 48 TOTAL Lubricants/UIS Lamborghini Huracán GT3 to start in sixth position. After a post qualifying penalty due to a technical infraction, the No. 48 Lamborghini Huracán GT3 started from the rear of the field instead of the sixth place position.

Snow started from 16th, but was on a mission to prove the speed and skill of the Huracán. In the first lap, Snow catapulted from 16th to 10th, determined to regain lost ground. Snow caught up to Katherine Legge in the 93 Acura, and after brief contact between the two, the Acura went spinning, resulting in the Lamborghini receiving a drive through penalty while in ninth position. Both cars rejoined, with Snow in 14th.

Snow pitted at the end of his stint in 12th position, giving the car to co-driver Bryan Sellers to take over for the rest of the race. A heated battle between the 75 Mercedes and 50 Porsche allowed Sellers to get by, taking another two positions. Throughout his stint, Sellers continued his climb through the field. He settled into sixth position, which is where the No. 48 finished the race.

For the next stop of the IMSA weather tech sports car challenge, Paul Miller Racing will compete at VIRginia international Raceway, August 25-27. The Michelin GT Challenge at VIR will air on FOX Sports 1, 1:30 to 4:30PM ET.

We were looking at the weather very closely today. We put a set up on the car that could have worked well in wet and dry conditions. We started from the back and fought our way up to sixth. We had the pace to get there, but definitely not the pace to get any further forward. I think the best position we could have gotten would have been fifth.  We executed very well. We’ll come back at VIR and see if we can do any better.

Bryan Sellers
It ended up being a good day for us. We had a very difficult starting position and we were able to overcome that and work our way up into sixth position.  We were able to run right at the tail end of the lead pack. It’s obviously very difficult to pass in these races no matter what, but we needed to show we had speed and a solid race car today. Mission accomplished. It shows we can bond together as a team, and we can make something good out of something bad. I’m proud of the guys. I’m proud of their resilience. What the result was in great today, it was a moral victory.