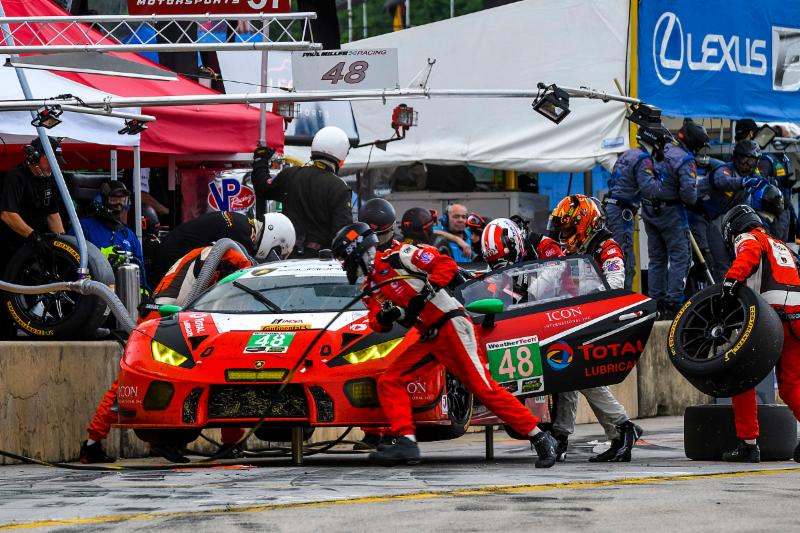 BRASELTON, Ga., (October 8, 2017) – Paul Miller Racing endured a difficult Petit Le Mans on Saturday as it closed out the 2017 IMSA WeatherTech SportsCar Championship. The team started eleventh to get to the front of the GTD field to be a podium contender when contact from another car forced the team to come in for lengthy repairs, resulting in a seventh place finish.

Light rain appeared during the morning warm up, resulting in a wet track for the race start. The No. 48 TOTAL Lubricants/UIS Lamborghini Huracán GT3 started in eleventh on rain tires, and Madison Snow’s charge gained the team two positions on the opening lap. The track quickly dried, and Snow pitted on lap six to trade the Continental wet tires for slick racing tires. The first of 14 cautions came out 17 minutes in, pitting from second position after the majority of the GTD field did the same. Trent Hindman took over from Snow, joining in 13th, to reel in Ben Keating in the No. 33. On lap 33, Hindman made the pass, and worked his way up to tenth as the field completed the first hour of racing. Hindman restarted from the next full course caution in ninth, working to keep the No. 48 clean and in a comfortable position to fight for ground.

Bryan Sellers took over from Hindman under another caution, joining in eighth, but cycled through to restart in fourth position. His stint showed the fastest times yet for the Lamborghini, climbing his way up to second behind the No. 96 of Justin Marks. With 131 laps complete, Sellers took the lead of the GTD field, and pitted at the end of the stint to have Madison Snow resume his driving duties. The battle for the GTD positions heated up, as Snow rejoined in seventh, but quickly worked his way up to fifth by the next caution. Another charge during a brief green period brought Snow up to third, battling with Christopher Mies in the No. 29 Audi R8 LMS.

As the 10 hour endurance race reached the halfway point, Snow suffered contact from another car, but telemetry from the engineers in the pit stand assured the racer that the car had no damage. The car suffered damage less than 30 minutes later when contact in the esses forced the No. 48 to come in for lengthy repairs. He rejoined four laps down, and the rest of the race, the No. 48 team tried to utilize pass arounds under caution to regain lost space. Snow rejoined in eleventh and attrition in the field brought the car up to seventh. Sellers and Snow traded the car back and forth for the final hours, avoiding several incidents to finish in a secure seventh place finish.

Paul Miller Racing has yet to officially announce its plans for the 2018 season, but will do so in the coming months. The IMSA WeatherTech SportsCar Championship will kick off its 2018 season January 27-28, 2018 at the Rolex 24 at Daytona.

We had a pretty quick car, for such a long race. I’m glad to have Trent on board. He did a great job for us. The start was pretty fun to be able to start on the rain tires. It added a new mix to the strategy because no one knew what the conditions would be at the start or at the end of the race. We had to set the car up for mixed conditions, and we had a real good car. We set some fast laps, and the crew did an excellent job. We got into an incident that put us a few laps down. If it wasn’t for that, we would have been fighting for a podium position. We have a great car and a great team. Hopefully we can come back and try it again.

It was a long day. The day gets a lot longer when you think you have a good race car that is podium capable. Then you get cars that turn down on you and make contact. I’m not assigning blame, because I’m not sure that the car even knew Madison was there. Unfortunately, it happens. It’s one of those instances where if it works, it’s the pass of the race. We were all excited for Madison to see the pass happen. On the positive side, we were much better here than we were last year. We were certainly more competitive. We’ll keep trying to build, learn, and try to do better for the next time around.

It’s a lot more nerve wracking to sit outside of the car for the last six or seven hours than being in the car. Our day was looking so good until some contact in turn three took us out of the running. Madison was on a charge, and it was just awesome to watch. It was cool to be a part of this team. I appreciate Paul letting me be a part of this opportunity. I’d like to thank Chris Ward and Giorgio Sanna for making this possible as well. I’m grateful for Bryan and Madison to include me and make me a part of this as well. For me, it was an incredible learning experience. There are certainly things I will go back and evaluate and work on. It’d be nice to work with these guys again, and be even stronger. My goal was fulfilled and that was to keep it simple and give it to Bryan and Madison without a scratch, so I’m pretty pleased.