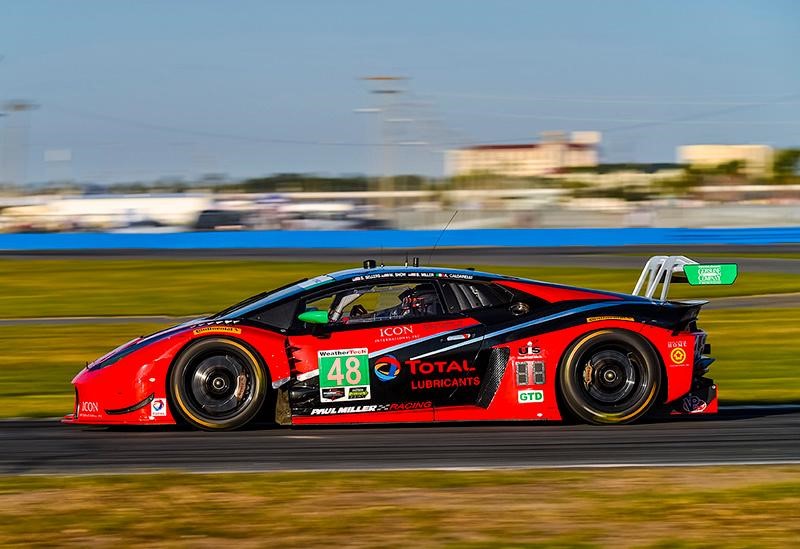 The team and drivers didn’t let an unplanned stoppage for cold and wet track conditions on Saturday keep them from running 145 total laps for more than 500 miles on the 3.56-mile DIS road course.

“It was a really good test for us,” said Team Owner Paul Miller. “We got the car very comfortable for the guys to drive for the duration, for a long-endurance race, and we are leaving here really happy with the setup we have on the car. We know things can change a lot, obviously conditions change, but it was a really successful test for us. We are very pleased.”

Sellers and Snow return to Paul Miller Racing for the second-straight year in 2017 as full-season co-drivers.

“It was a good couple of days,” Sellers said. “I think the only thing you can judge from the Roar is preparation. What we did was come in, verify what we needed to verify in terms of car balance, get the speed where we needed it to be, and to address some things that need to be fixed as far as ergonomics inside the car to make it easier for the race. Ultimately, I think that is all that you can really get a base for off of the Roar, and we were able to check that stuff off the list. All in all it was a very successful test.”

Sellers and Bryce Miller were co-drivers on the No. 48 team when Paul Miller Racing finished a career-best second in the GT class in the 2011 Rolex 24. Snow has co-driven to consecutive Rolex 24 GTD-class third-place finishes in 2014 and 2015.

“It was good to get back around the track, get familiar with it, and to get the drivers comfortable again with who you are driving with,” Snow said. “We just have to come back for the race and see what our pace is and see where everybody else is. The car seems good, the team seems good and it’s good to be back with Paul Miller Racing. I really like this race a lot.”

General Manager of Paul Miller Jaguar Morris County in Madison, New Jersey, Bryce Miller didn’t arrive in Daytona until late Saturday night after wrapping up the work week and then dealing with delayed travel after a winter storm that hit the East Coast.

“It was pretty stressful just getting here, getting away from what I have been doing, dealing with the winter travel, and then quickly getting into a change of mentality or focus to race car driver mode,” Bryce Miller said. “After finally getting here, it was good to get some laps and find some comfort in the car.”

Miller turned some of the No. 48 team’s fastest laps in Sunday afternoon’s seventh and final session of the Roar test. He last drove for the team in 2016’s season-ending Petit Le Mans at Road Atlanta in October, joining Sellers and Snow for a fourth-place finish.

“My confidence is up again, it has been three months since I have been out of the car, which may not sound like a lot, but it feels like an eternity in the racing world,” Bryce Miller said. “It was good to find some renewed confidence heading into the event.”

Caldarelli will be making his Rolex 24 At Daytona debut but the quick Italian brings extensive open wheel and sports car racing experience to Paul Miller Racing. He has been a top contender in the Japanese Super GT series for nearly a decade, earning championship runner-up honors in the recently completed 2016 Super GT championship.

The Roar was Caldarelli’s second test with Paul Miller Racing after first joining Sellers and Snow at Daytona in the November IMSA test.

“I have come to the U.S. before for holiday but these are my first times for racing,” Caldarelli said. “I have never been in such a place like Daytona, in Japan, in Europe, nowhere. Even the infield is kind of new for me because it is kind of like a street circuit, it doesn’t look too much like a race circuit I am familiar with, but it is really nice. It is very challenging and every single lap you have to be really committed to do a good lap time.”

Next up for Paul Miller Racing is the 55th Rolex 24 At Daytona at Daytona International Speedway, January 26 – 29, 2017. The race will open with a live FOX Network three-hour telecast beginning at 2 p.m. EST on Saturday, January 28, with the Rolex 24 green flag scheduled to drop at 2:30 p.m. EST.