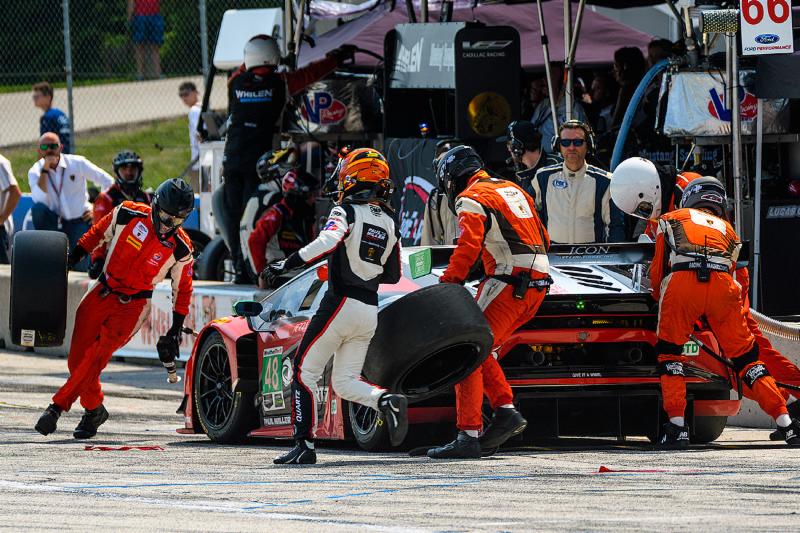 ELKHART LAKE, Wis. (August 5, 2018) – Paul Miller Racing closed out another successful race weekend on Sunday at Road America for the eighth round of the IMSA WeatherTech SportsCar Championship. The No. 48 TOTAL Lubricants/UIS Lamborghini Huracán GT3 finished in second place at the Road Race Showcase, earning their seventh podium in eight races to date this season.

“This is a great finish for us,” said Team Owner Paul Miller. “It’s great to be back on the podium again and to have another top finish. We didn’t think we had a great car for this race. We thought we’d be sixth or seventh, so to come away with a second is fabulous.”

Leading into the event, the team gained steady progress with each session, settling on a set up for Madison Snow to qualify in third behind the No. 58 Porsche and the No. 14 Lexus. In the opening lap of the two hour and forty minute race, Snow passed the Lexus to take second, but was shuffled to fourth in the next lap before the first full course caution interrupted the battle on track. He maintained position behind the No. 73 of Patrick Lindsey for the first half hour of the race until the next full course caution brought Snow into pit lane. Because Snow had yet to complete the required minimum drive time, the Lamborghini pitted from fourth to only take on tires and fuel.

Prompt work in pit lane from the Paul Miller Racing crew gave Snow the ability to leave pit lane in second place behind the No. 93 Acura of Justin Marks. As the race recommenced, the top six GTD class cars ran nose to tail, each looking to make their fight for position. Snow stayed close to Marks and made the pass in turn three, a move that allowed the No. 73 Porsche to climb to second and pressure Snow for position. Madison led Patrick Lindsey and the rest of the GTD field through another series of cautions, capitalizing on the restarts to lead by 3.7 seconds. Just past the halfway point, trouble struck for Lindsey, sending the No. 73 Porsche off course, bringing out another caution. Just before the yellow flag was waved, Snow darted into pit lane, gaining a significant strategy advantage over the field. Bryan Sellers took over and rejoined in first, with Pat Long behind in second. Long passed Sellers on the restart, as the race again went under full course caution with 35 minutes remaining.

Although the Porsche held the straight line speed the Lamborghini lacked, Sellers pressed on, gaining as much track position as possible, with a podium in sight. Sellers crossed the finish line in second position, securing the points necessary to expand Paul Miller Racing’s lead over the No. 86 Acura and No. 33 Mercedes. Unofficially, Sellers and Snow currently have 250 points, holding 18 points over the No. 86 of Katherine Legge, and 30 points over the No. 33 of Ben Keating and Jeroen Bleekemolen.

“We got a couple of lucky breaks during the race, especially when the No. 73 went off, and we got in before they closed the pit,” said Miller. “That gave us a huge advantage in track position. We’re very excited to earn another podium from a phenomenal effort.”

Two sprint races and one endurance event remain in the IMSA WeatherTech SportsCar Championship. Paul Miller Racing will race next at VIRginia International Raceway, August 17-19 in Alton, Virginia. Sellers and Snow won at the 3.27 mile track from pole position in 2016, and Paul Miller Racing earned three more top five finishes in 2014, 2015, and 2017. For schedule and ticket information, visit imsa.com.

Madison Snow
What a race, back on the podium. You go into a race thinking you’re capable of a podium, but never knowing that it’s going to happen. So you’re pushing every session, and we needed up making up time pretty good. The race was amazing. My stint was supposed to only be a single but ended up being a double. It was wonderful to stay in the car and battle it out with the other drivers. I had a lot of fun out there and our car was amazing. I’m glad we ended up back on the podium.

Bryan Sellers
It was a great day. We’ve had a hard time breaking through here before. We just haven’t had good races at Road America, and today was a flip for us. You always want to win, but we didn’t have the fastest car—we didn’t even think we had a second place car today. Madison had a great couple stints, and the guys had a phenomenal stop in the middle that jumped us up a couple spots. Days like today where you don’t have the quickest car but you have a great team is where the results come from. I’m really happy with this, and now we’ll go on to the next one.