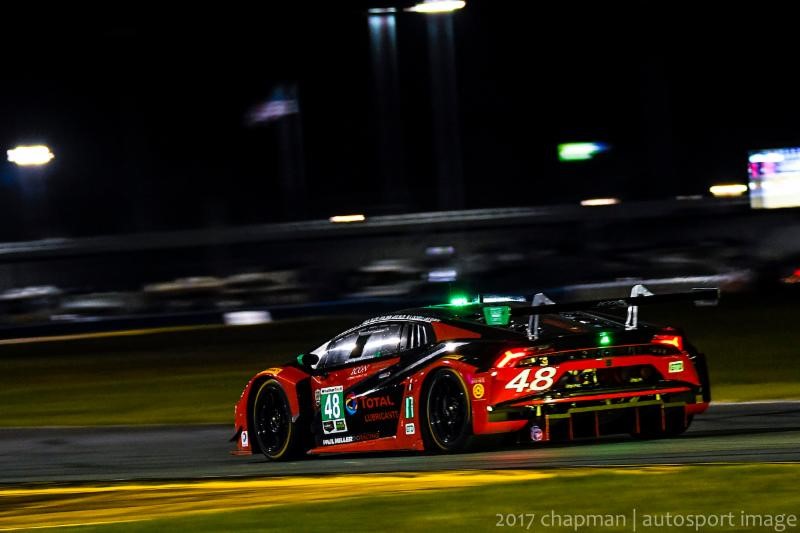 PARSIPPANY, N.J., (December 28, 2017) – A new season of the IMSA WeatherTech SportsCar Championship is set to begin in the first week of the New Year, and Paul Miller Racing will return for a full season effort in the GTD class with a familiar lineup. The team will enter the No. 48 TOTAL Lubricants/UIS Lamborghini Huracán GT3 in competition, piloted by Bryan Sellers and Madison Snow for the third consecutive year. Joining as endurance drivers for the opening event, Bryce Miller and Andrea Caldarelli will race alongside Sellers and Snow for the Rolex 24 at Daytona International Speedway.

“I’m pleased we’re returning to Daytona with the same lineup as 2017,” said team owner Paul Miller. “Luck may have not been on our side during the race, but the performance from the car and drivers was there. We’ve put a lot of work in during the off season, and we’re looking forward to it paying off on track this year.”

In Sellers and Snow’s first season together as co-drivers, the pair earned one win, two poles and one additional podium, resulting in a third place finish in the 2016 GTD championship standings. The following season, the No. 48 qualified on top to earn three pole positions, finishing on the podium twice in 2017. After completing off season testing and development, the pair is ready to shake off the 2017 gremlins and attack the 2018 season head on.

“I’m very excited to be returning with Paul Miller Racing,” said Sellers. “It’s a fantastic organization with a commitment to winning. I’ve spent two years there and have had great results and showed great promise. I hope this year we can contend for the title for the entire season. The competition level is high and we will expect nothing less than a terrific battle.”

“I’m glad to be back with the team with the same lineup we ran last year with,” echoed Snow. “That gives an emphasis as to how solid our team is when we can have the same crew and drivers as last year. Andrea and Bryce were great to drive with last year I am really excited to have them back again. Getting accustomed to a new team with new drivers really cuts down on setup time. The competition will be is hard as ever, so we will do our best and see how we hold out over this 24 hour race.”

“I’m grateful the team has provided me the opportunity to come back and join them after being out of the car for nearly one year,” said Miller. “It’s not lost on me the work I have to do to find my groove again, but I know Bryan, Madison, and Andrea will help where they can and it will be fun to work with them all again.”

“I’m really happy to re-join my American family, Paul Miller Racing, for the second time,” said Caldarelli. “I want to thank Lamborghini Squadra Corse and all the people at Paul Miller Racing for this chance. Daytona 24 hours is one of the greatest races in the world, and my debut last year gave me a great feeling. The atmosphere is great, and competition level is really high. I already have the chance to work with the team, so in the test days we’ll be able to start from some good base levels from last year. I can’t wait to meet my co-pilots Bryan, Madison, and Bryce to be focused on the target, which is to improve our seventh place finish from last year.”

Rolex 24 participants will first complete the official test of the event, the Roar Before the 24, January 5-7 at Daytona International Speedway. Competitors will receive eight hours of on track time for testing before qualifying on Saturday morning. The newly implemented qualifying session will not determine the starting positions for the Rolex 24 at the end of the month, but instead the session will establish the garage and pit lane placement for the event. The Rolex 24 at Daytona will take place Saturday, January 27 to Sunday, January 28, 2018. For ticket information, visit imsa.com.