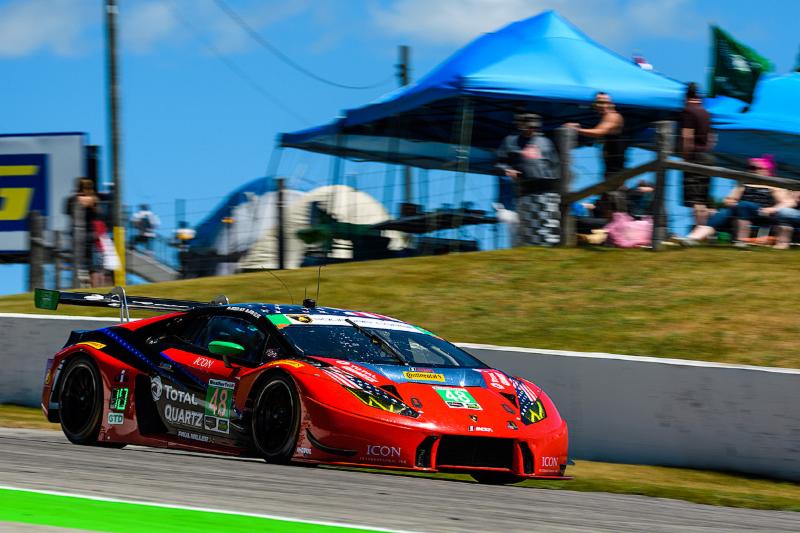 The strength of the GTD team showed this weekend, not only in speed but in strategy and on pit lane. A series of caution periods hurt the team’s chances at a podium finish, but the team completed its goal of finishing in a solid position to extend its championship points lead over Meyer Shank Racing.

Bryan Sellers started the sprint race in third position, behind the pair of Lexus entries, which had shown superior speeds over the fields all weekend long. After a clean start with minimal battles, the first full courses caution arrived 20 minutes into the race. Bryan Sellers pitted under caution to rejoin in eighth, behind the No. 63 of Cooper MacNeil. He made quick work to pass MacNeil, and then the No. 96 of Robby Foley in turn one to take fifth position. As pit stops cycled through for the cars on alternate strategies, Sellers moved up to the lead, with strategy from the pit box giving him a 45 second lead over the field. His massive lead was short lived after yet another full course caution brought the field together, removing his gap.

He pitted from the lead under caution and co-driver Madison Snow took over to turn his first laps of the race, rejoining in eighth position with 80 minutes remaining. Snow restarted behind the 96 of Bill Auberlen, but trouble for the BMW moved Snow up to seventh. He pitted with less than 60 minutes remaining, followed by the No. 86 Acura, the closest contender in the points battle. While the Acura gained an advantage in pit lane, Snow made the pass to take fourth position on lap 69, with 53 minutes remaining on the race clock.

In the final half hour of the race, No. 45 Audi of Andy Lally engaged in an extended battle for fifth position with Katherine Legge in the No. 86 Acura. Their battle allowed Snow to create a safe 4.7 second gap and focus on chasing the next podium spot. Yet another full course caution threw a wrench in the team’s plans, bringing the entire GTD field back together for a final sprint to the checker flag. Lally passed Snow on the restart, and carried the position to the checker flag, resulting in a fourth place finish for Paul Miller Racing.

The result ended the five race podium streak the team held coming into the event, but the fourth place finish earns the team a coveted sixth straight top-five result. Heading into round seven of the championship at Lime Rock Park, Paul Miller Racing unofficially holds a three point lead in the GTD point standings. The Northeast Grand Prix, a home race weekend for the New Jersey based team, will be July 20-21 in Lakeville, Connecticut. At just 1.53 miles in length, the track is the shortest on the IMSA schedule, and will host both IMSA GT classes. For event information, visit imsa.com.

Bryan Sellers
It was a pretty good day for us. Unfortunately, it ends our podium streak, but we just didn’t have the pace for the cars in front of us. That was clear all weekend, but I think for us to come home in fourth was a strong team effort. We had some unlucky yellows but some good strategy calls. All in all, it was a solid race car to drive, just not enough speed. There’s not a lot we can do about that. We’ll go to lime rock and try again. It’s a different track, and a different day.

Madison Snow
The race went well for us. We didn’t end up on the podium, but we extended our championship lead, and that’s what we were worried about. The 86 car was one point behind us, and now we have more of a gap to them. Not much more, but something. This track is always a fun track to come to. Canadian Tire Motorsport Park has such high speed compared to the other tracks, and it makes for a fun sprint race. It changes the way prototypes and GTLM cars pass us, and their closing rates. It changes strategy, but that’s what makes it fun. You want something challenging, and this track offers that. We had a car with a good set up for that, and we did everything we could.