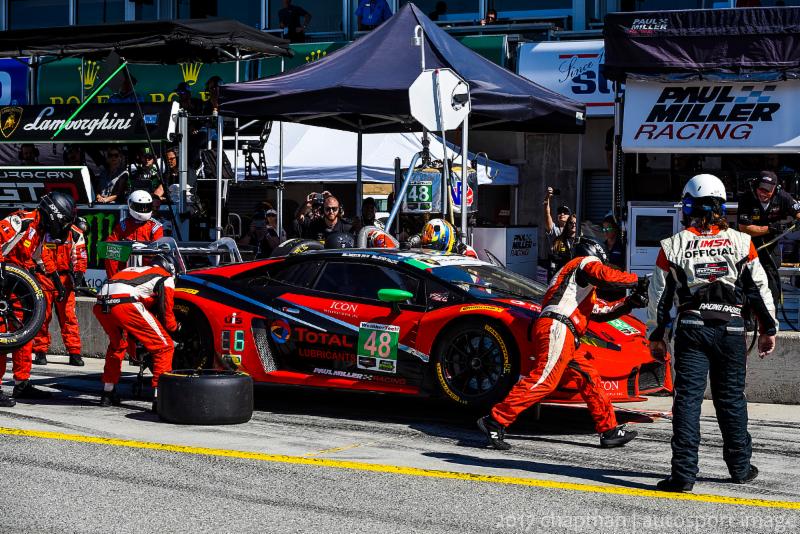 After earning pole position at the Monterey Grand Prix, the team’s third of the year, contact from another car dashed the team’s podium hopes, but drivers Bryan Sellers and Madison Snow were able to race competitively, earning a seventh place finish in the No. 48 TOTAL Lubricants/UIS Lamborghini Huracán GT3. The reliability of the Lamborghini will bode well for the team at Road Atlanta’s Petit Le Mans, which operates out of a shop in the Atlanta metro area. The ten hour endurance race, now in its 20th year, will begin at 11:00AM on Saturday, October 7. With possible thunderstorms in the forecast for the race, weather temperatures and conditions could be key influencers in the race, especially into the night hours.

While faster overall speed will aid the competitors, pit stop strategy, time spent in pit lane, speed of driver changes, avoiding contact, and the timing of caution flags all play in to a team’s success during the endurance event. With the addition of a third driver to the lineup, each driver will also have to meet the minimum and maximum drive time requirements, set by the IMSA sanctioning body. The 20th Motul Petit Le Mans will be Hindman’s first run at the iconic event.

This is one of my favorite events of the year. In a lot of ways it is an event to judge your success on outside of your points standings. It allows you to look back and reflect on the progress you have made and also evaluate where you need to go for the future. We have had a lot of really fast race cars this year but have missed slightly on our execution in some races. This our final opportunity to try and get it right. Everyone will be looking to accomplish the same goal this weekend. We can only hope that we have a little more than everyone else.

Madison Snow
Petit Le Mans is all about the rhythm and incorporating the traffic into it. It’s a very short track compared to most of the others we race at, which gives you an exceptional amount of time to get familiar with the course. Even with all of the laps I have on this track and will get during the week, Turn 7 is the hardest turn for me as I always struggle to consistently get solid exit leaving. But that’s why we race, because it’s tough and competitive and not easy to replicate. This race we add Trent Hindman as our third driver, the team has been spending the early part of the week getting to know him, as well as practicing driver changes and getting comfortable in the car. I feel that gives us a distinct advantage, having someone that will be familiar with the team and the car before the weekend even starts.

I was over the moon when I had received confirmation a few weeks ago that I would have the incredible opportunity to run the 20th anniversary Petit Le Mans with Bryan, Madison, and the Paul Miller Racing team. Now, it’s race week and it’s 100% focus on the task at hand. These guys are obviously a very strong team with high hopes and expectations for a great result and I certainly feel that we can deliver. Bryan, Madison, and the entire team has helped me tremendously with preparation for a long distance endurance event in the Lamborghini Huracán GT3 and I very much look forward to getting to work!