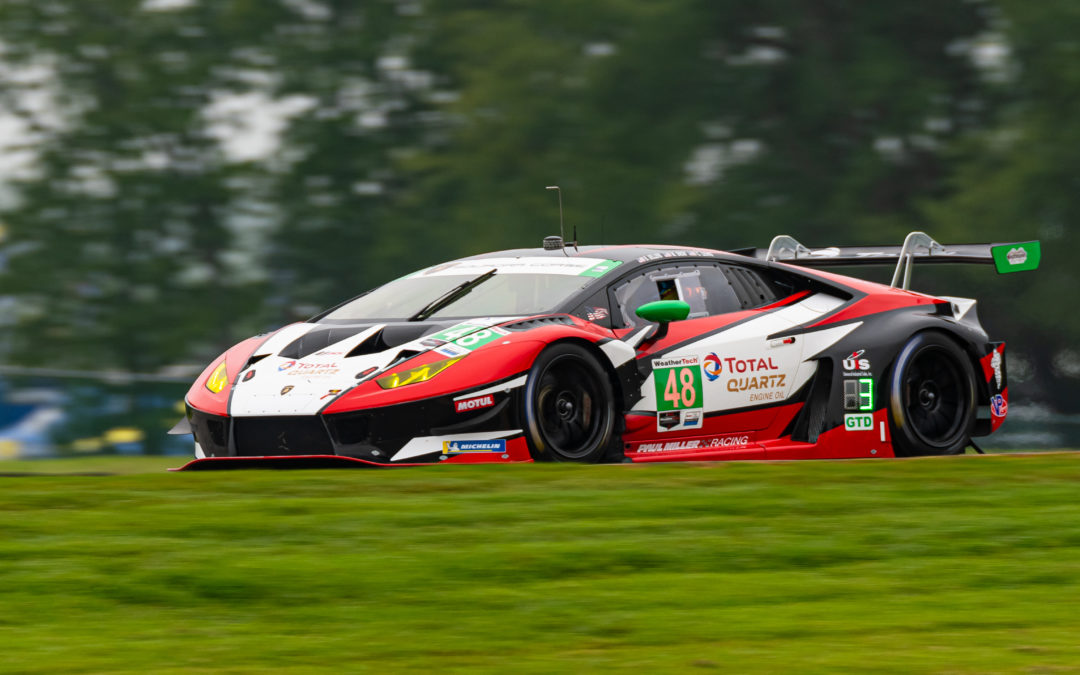 After taking a hiatus due to the COVID-19 pandemic, the No. 48 Total lubricants-backed Lamborghini squad returned to action at the last round at VIRginia International Raceway. Despite not racing in the Lamborghini Huracán GT3 since winning the Rolex 24 at Daytona in January, Madison snow and Bryan Sellers crossed the line third in the race.

Sellers and Snow will once again be joined by Corey Lewis as they compete in the six-hour TireRack.com Grand Prix at Michelin Raceway Road Atlanta as part of Michelin Endurance Challenge Weekend. Lewis joined Snow and Sellers for their Rolex 24 at Daytona win this year, as well as their 2017 12 Hours of Sebring victory.

“VIR was a warm up race for us for this round at Michelin Raceway Road Atlanta after taking so many months away from competition,” Paul Miller Racing founder Paul Miller said.

“Since we are only competing for points in the Michelin Endurance Cup, this is the race where we really need to execute and get the best result we can for the championship.

“It will be great to get Bryan and Corey and Madison all back together. I have the utmost faith in those guys to deliver a great result, and in this team to build a car to get us to the front. We’ll have the home track advantage as well this weekend and the always supportive crowd at Michelin Raceway Road Atlanta!”

The TireRack.com Grand Prix at Michelin Raceway Road Atlanta marks the second of four rounds of the IMSA Michelin Endurance Cup, replacing the cancelled Sahlen’s Six Hours of The Glen. Paul Miller Racing currently holds a three point lead in the standings thanks to their win at Daytona.

The race will be shown live on NBCSN from 11:30 AM to 12:30 PM Eastern and from 2:30 PM to 6:00 PM. Live flag-to-flag coverage will be available on TrackPass on NBC Sports Gold and on the NBC Sports App with authentication starting at 11:30 AM Eastern Saturday, September 5th.

Bryan Sellers
“I have always loved endurance races. What’s so special about them is the team aspect that goes on behind the scenes to be able to perform and get a good result after six hours. I’m so glad that Madison, Corey and I are able to return together for the remainder of the endurance races and hopefully win the Endurance Cup.
“While I’m sad we won’t be attending Watkins Glen this year due to the pandemic, Road Atlanta has always been one of my favorite events, as well as my second home track, and I can’t wait for it to get started!”

Madison Snow
“I think we’re all excited to get back to racing again this weekend at Michelin Raceway Road Atlanta. We had a good time at VIR, but that was just a warm-up for this weekend. We’ve got to buckle down and perform for six hours to make sure we’re there at the end to get the points for the Endurance Cup.
“The other thing we’re all looking forward to this weekend is the return of the fans. Even if we can’t do meet and greets and autograph sessions, just having the fans at the track, especially the great fans they have at Road Atlanta, will definitely give us extra motivation!”

Corey Lewis
“I’m beyond excited to get back to work with everyone from Paul Miller Racing this coming weekend. It’s hard to imagine that it’s been more than eight months since we were standing in victory lane together at the Daytona 24! Road Atlanta has always suited our car very well and I hope we can continue our dominance to add more points for the Endurance Cup.
“This weekend will be very busy for me as I’m also competing in the Lamborghini Super Trofeo series and in the IMSA Michelin Pilot Challenge race. So hopefully by the end of the weekend I’ll be able to have four victories in four races, including another win this year with the folks at Paul Miller!””