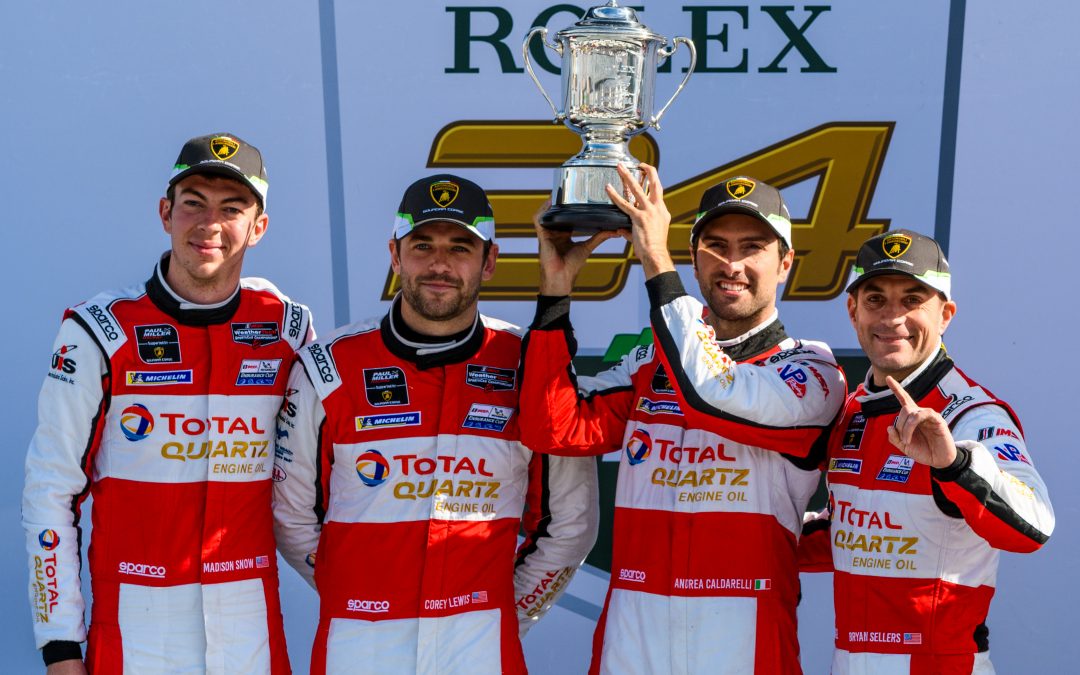 After starting eighth on the grid, Madison Snow took the green flag, and by lap 100, Bryan Sellers had the car into second place.

By lap 158, Corey Lewis had the race lead after five hours and the No. 48 Total lubricants-sponsored Lamborghini remained a leading contender for the remainder of the race.

Paul Miller Racing held the race lead on 19 different occasions as the GTD teams cycled through pit stops, and Andrea Calderelli took the car to the front for the final time with 27 laps remaining. 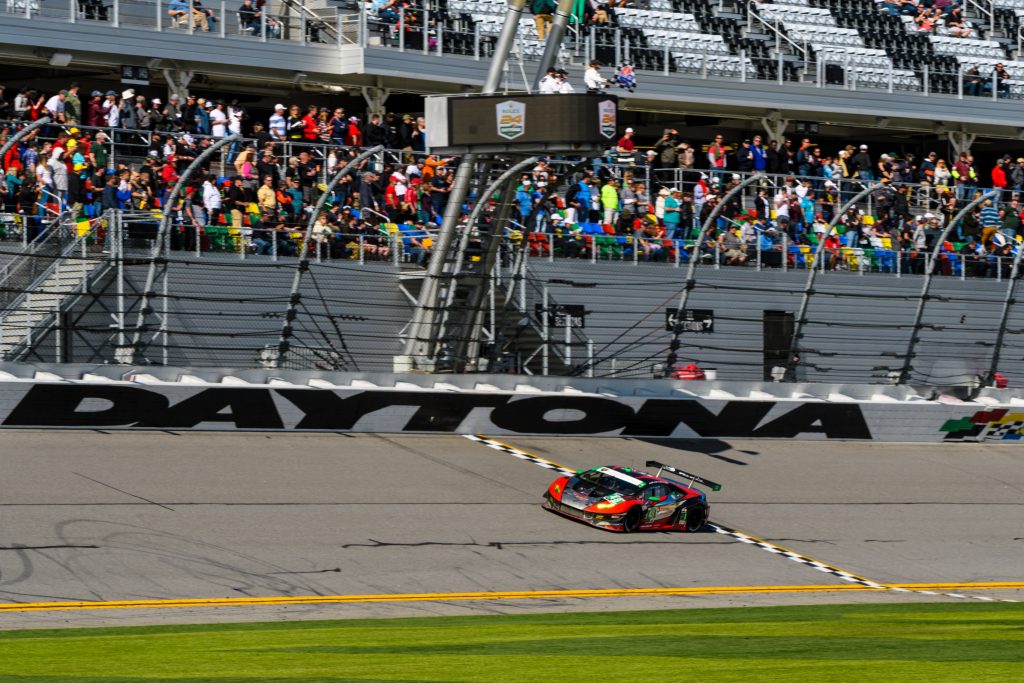 The team ran a nearly faultless race with only a single drive-through penalty for having the rear wheels rotating while still on the jacks in the middle of the night. By the checkered flag, the No. 48 held a 21.908-second lead to earn the team’s first win at Daytona.

The team carried a memorial decal on their car this weekend, honoring a friend of the crew Spencer Cox that passed away in the off-season. Many members of the Paul Miller Racing team spent time racing with Cox in Daytona and having his memory in victory lane was special for much of the crew.

“I’ve driven at Le Mans and had the car break on me in the very last lap. And anything can happen, it’s goofy what can happen in this game we all love. 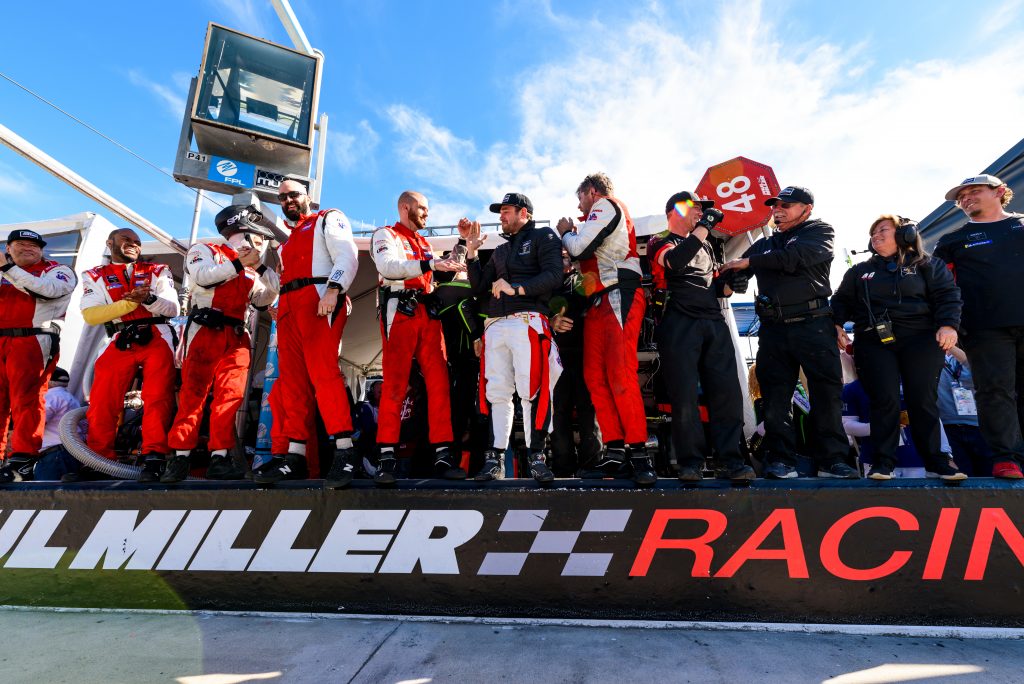 “It’s just so rewarding to have Lamborghini behind us, and Total behind us. And our guys have just done a great job. I’m just so over the moon.

“We’ve had the benefit of having continuity on our team, and particularly among these drivers. Andrea has been with us before, Madison is also back, which is a big deal.

“We have a great team and these guys really get along well and it’s a really strong team effort. I really appreciate the way our whole team approaches racing.

“I won in 1988 as a co-driver, but to have the opportunity to own the team and have a hand in putting this group together and making decisions that helped us get this win is really satisfying.”

The victory at Daytona kicks off a perfect start to the team’s 2020 IMSA WeatherTech SportsCar Championship title chase. Sellers and Snow will be out to replicate their 2018 championship win, which also included a major endurance victory with Lewis at the 12 Hours of Sebring. 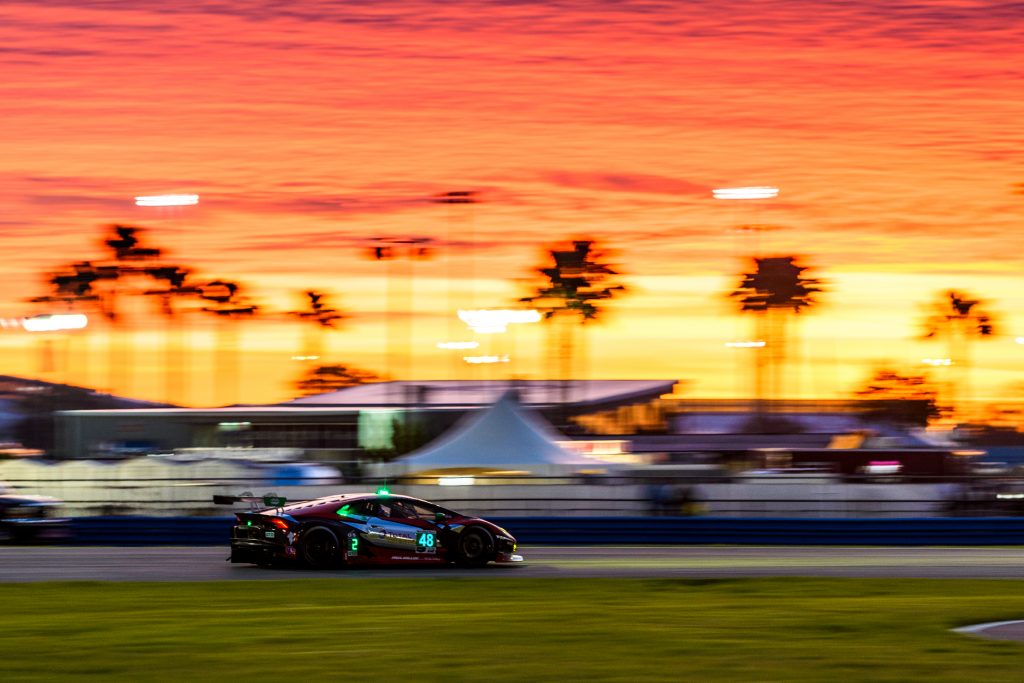 Bryan Sellers
“I have to say thank you to the entire team. Everyone did their part to win this race. I have to say, we’d be remiss not to note the job Andrea did today. He was our go-to guy and pulled us through a lot of struggles.
“We’re just super happy to be doing this together. This is the driver line-up we’ve wanted for a long time and we’re happy to be here. It’s a lot of years of trying and a lot of years of pain.
“Watching people walk by you with the watch you want so bad. There really aren’t words to describe watching them hand you and your teammates the watch.
“It feels so good to get it to come together finally. I think for the four of us, this is something we’ve all waited to do together.
“With Madison back with us this year, it’s like getting your best friends back together to drive race cars. You get to do it with the people you love and the people you want to do it with. Andrea has been an integral part of our program for the past four years. I feel like he was actually the backbone of the program yesterday and today. Each of us had moments where we shined, but today really rested on his shoulders in those final three hours.”

Madison Snow
“It’s amazing. And I’m glad it was with Paul Miller Racing. It was so nerve-racking the last three hours of the race. It was about being there at the end, but we knew it was going to be a tough fight, but you never think the tough fight is going to last the last three hours of the race.
“It’s a pretty spectacular feeling. I’m happy to be able to do it with the people I’m sitting with. I get to run with the people I love to drive with and to walk away with a Rolex is one of a kind.
“Getting up to speed this week was what I was worried about going into the race. I thought it’s rough having Daytona being the first race of the season. But it’s nice – it’s such a long race, your first stint doesn’t have to determine your
outcome, so I can work my way in, and get back in after getting comfortable with the car.”

Corey Lewis
“It’s everything you could ever imagine. I’m kind of at a loss for words. I’m emotional. It’s a dream come true. That’s the longest; it’s been 3 hours since I’ve been in the car, and the time just wouldn’t go any faster. Hats off to this whole Paul Miller organization. We dug deep. We worked so hard. The car was flawless. The pit stops were perfect. They did an awesome job. Guys, we just won the Rolex!
“This is my second attempt with Paul Miller Racing, last year we were knocking on the door, and this year we were able to cross it off the list.
“I felt like this weekend was almost flawless. We worked on a few things during practice sessions and throughout the race. The crew, the pit stops were perfect every single time. We’re all really close friends, so the fact that we can say we won the Rolex is extremely special.”

Andrea Caldarelli
“There was a lot of pressure. It was more like a sprint race than an endurance race. The last three years were more on strategy, this year, without so many yellow flags it was a consistent push. The last three hours I was in the car, it was extremely tough, but I was fighting with my teammate in Europe, so it was strange.
“Each one of us had a different approach to the race, and that’s what I think today was able to deliver the win. We are all different, but we work well together. I think that’s a key point to winning such an important race.
“It was very tight at the finish. Usually, I race with Marco (Mapelli) in the same car, so we never really fight one-on-one. But I know him and it was a very fair fight. We both represent Lamborghini as well, so we didn’t do any stupid things. I think outside it was very fun to watch, but it was especially fun inside the cockpit.”