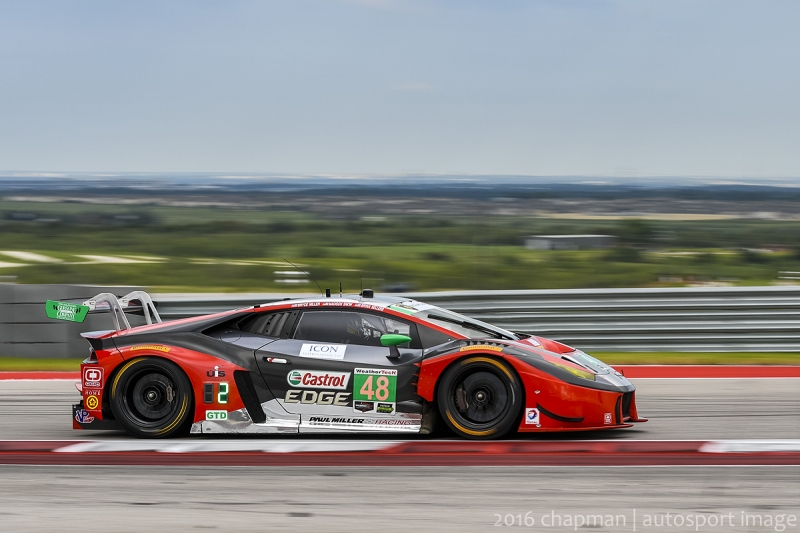 BRASELTON, Georgia (September 30, 2016) – Paul Miller Racing and team drivers Bryan Sellers, Madison Snow and Bryce Miller will be looking for the team’s second Petit Le Mans victory in the last three years this weekend at the wheel of the No. 48 Lamborghini Huracán GT3 at the season-ending IMSA WeatherTech SportsCar Championship race at Road Atlanta.

Petit Le Mans is scheduled to go green at 11:10 a.m. EDT this Saturday, October 1, with coverage on FOX Sports 1 (@FS1) at 11 a.m. EDT kicking off continuous live programming of the 10-hour race throughout the day on @FS1, FOX Sports 2 and IMSA.tv.

Sellers and Snow also have multiple race wins in the challenging 10-hour race, making Paul Miller Racing one of the few teams in this year’s edition fielding a lineup of nothing but former Petit Le Mans winners.

“Petit Le Mans is a very exciting race, it is one of the ‘big three’ we do every single year,” Sellers said. “It is one you really want to win because you want to end the season on a strong point.”

All three drivers put the No. 48 Lamborghini through its paces in Thursday’s three practice runs, including a top-five run in the 90 minute night session.

“Petit Le Mans is one of my favorite races for sure,” Snow said. “It was the first endurance race that I was in, and I had the chance to compete with the Flying Lizards in 2013 when we finished first. Maybe the good results I have been lucky to have had in the past years makes this track very exciting for me.”

Bryce Miller, now focusing on the team’s endurance race program, makes his fourth and final 2016 appearance with the team this weekend after co-driving with Sellers and Snow earlier this year at Daytona, Sebring and Watkins Glen.

“I am excited to join the team at a momentous time and at our home circuit,” Bryce Miller said. “It’s more fun to be with a team that’s hitting its stride and delivering podiums. It’s more important to focus on that and not on all the pressure of the championship.”

Sellers is all for the No. 48’s three-driver lineup this weekend.

“I am excited to have Bryce back,” Sellers said. “This is a grueling race, it is very taxing mentally, and it is very hard to do with two people. To have Bryce come in with his experience level, and his knowledge of this race, will be extremely beneficial. Nothing would be better than to repeat what Bryce and the team did in 2014, which would give everybody sort of a positive beginning to the off season and let them hold their heads high.”

Paul Miller Racing has earned four top-five finishes in the last five IMSA races – including a victory last month at VIRginia International Raceway – that have moved the No. 48 team and drivers into contention for a top-three finish in the 2016 GTD championship.

“There is definitely a lot of pressure for the championship here,” Snow said. “This will be my first full-season deal where we have such a good chance to finish in the top three for the year-end points, so we are all really working hard to have this one come to us!”

Sellers, Snow and the No. 48 are fourth in the GTD team and driver standings with 264 points. While the leading Ferrari team has all but clinched the 2016 title, the No. 48 team trails the third place team and drivers by a point and are only three points out of second place.

“We have had a good string of races the last few events,” Sellers said. “The team has been strong and the drivers have been strong, and it has put us in a position to move up in the championship. I think it would be easy to fall into championship mode in this race and focus on the wrong things. Bryce, Madison and myself will go into the race, along with the crew, to try to be as good as we can be. If that ends up giving the chance to stand and accept an award Monday that would be great, but our main goal is to win the race.”

After a final one-hour practice Friday morning at 10:15 a.m., GTD qualifying is scheduled in the afternoon at 3:30 p.m. EDT.

Race-day Saturday starts with a 20-minute warmup at 8:40 a.m. with Petit Le Mans scheduled to officially start later that morning at 11:10 a.m. EDT.

– Paul Miller Racing will be the host team for the Austin Hatcher Foundation’s in-paddock auction today, Friday, September 30, at 1:30 p.m. EDT. Among the priceless Paul Miller Racing collectibles on the block will be autographed wheels used on the No. 48 in competition, a rocker panel from the No. 48’s bodywork, a complete windshield with a Lamborghini banner and much more from the team, Lamborghini and a few surprise donation items.