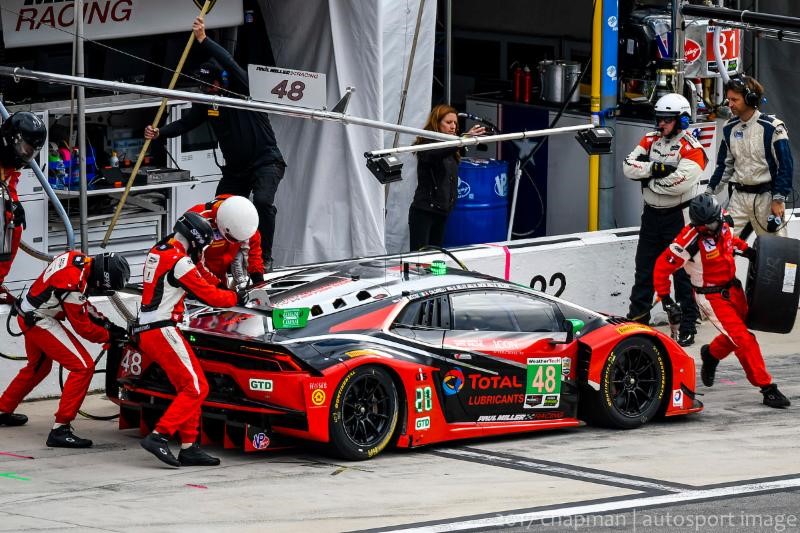 Bryan Sellers started the race in 12th position, but the car dropped down the charts to 15th then 23rd when early technical issues haunted the team in the opening stint. The team pulled together, fixing the problem quickly, and Sellers climbed back up to 15th position. A full course caution came out shortly after, and a miscalculation with the pass around procedure brought the 48 in pit lane for a stop and hold penalty. The stop dropped the car to 20th, and Dion von Moltke took over the driving duties just before the three hour mark.

As the temperatures dropped, the No. 48 Lamborghini Huracán GT3 worked its way up the charts to 17th. Madison Snow was the next driver to take over, as the skies opened and rain came down at the six hour mark. Despite the slick conditions, Snow laid down fast lap times, gaining back a lost lap and climbing to 13th before passing the driving duties to Bryce Miller.

Bryce turned his first laps of the race under the cover of night at the seven and a half hour mark. He rejoined in 14th, and gained back a spot in his hour long stint despite the conditions. Andrea Caldarelli was the final driver in the circulation, running the final hours of Saturday night. The rain continued to pour as Saturday gave way to Sunday, and the team pressed forward to break into the top ten in the GTD field.

At the halfway point, the rain continued to pour, resulting in several lengthy cautions due to crashes in the field, as well as treacherous weather conditions. By the 19 hour mark, the rain lightened, and the team pressed forward, rotating the drivers through the car as daylight came upon the track. With five hours remaining, the No. 48 sat in ninth position. In the final two hours, the reliability of the car and preference of the Paul Miller Racing team paid off, gaining two final spots to finish a satisfying seventh.
“I’m really proud of the whole team,” said owner Paul Miller. “We had a lot of little adventures that set us back along the way. We started with some technical issues that hampered us early on in the race. We were really trying to figure out what was wrong with the car for the first two hours of the race and were excited that we were able to get it right. After that, the car ran really well, and you could see we were running very competitively toward the last six hours.  The conditions were wild throughout the night, cold and wet with drizzling rain. I’m proud of how our drivers drove masterfully in tricky conditions! Our crew did a magnificent job, as always. We’re very pleased.”

Next up for Paul Miller Racing is the 65th Annual Mobil 1 Twelve Hours of Sebring Fueled by “Fresh from Florida,” March 16-18, 2017. The event stands as the second race in the IMSA WeatherTech SportsCar Championship, as well as the Tequila Patron North American Endurance Cup, and endurance championship within the existing schedule.

“This is such a tough race and our last 24 hours shows that. We had a few mistakes that cost us a few laps early on, and we were just never able to recover. We had a car that was good enough for a podium, and the crew was fantastic, but we just fell a little short. I’m so proud of how our team competed and continued to rise to the occasion.”

“The Rolex 24 at Daytona is always a difficult race, because it’s a matter of survival. Despite our issues, we were able to stay ahead of who we wanted to stay ahead of. We may not have won the race, but we’re proud to have still put forth such an effort and to have been so competitive. That was good for us. We had a lot of rain, and it was sketchy for a while. The new Continental Tire wets worked well with our set up. We ran a great race.”

“I think the team did a phenomenal job to salvage a result from some very difficult challenges. The car showed it is reliable over long distances and in varying conditions. It was a long race, but an incredible team effort, and we’re proud of our result.”

“This was my first experience racing in the United States. It was a great race, but very difficult. We had difficult conditions, especially during the night. It was a challenge for the drivers, and for the team calling the strategy, and the tires, and everything. We had our ups and downs during the race, which is normal for a race like this. We had an issue at the beginning that stopped us for three laps at the beginning that we weren’t able to get back in the end. It’s a pity, but we did all we could do. We showed we could be quick. The team deserved a better result, but we did a great job and had a great recovery from the start.”

“It was great to be back with Paul Miller Racing, and this time with the Huracán. It was one of the toughest Rolex 24 at Daytona runs I’ve ever had to deal with. The conditions all night were really difficult. I don’t think I got any sleep until 6:00AM this morning. I was feeling pretty bad when I got out of the last stint. The guys did a fantastic job keeping our car going and keeping us in the top ten when we really just didn’t have it on pace for the rest of the race. But hats off to my teammates: Bryce, Andrea, Madison, and Bryan. They all just did a fantastic job. It’s been special to be back with Paul Miller. The seventh place finish wasn’t exactly what we wanted, but it’s a solid result for the team and hopefully they get some good points moving forward.”