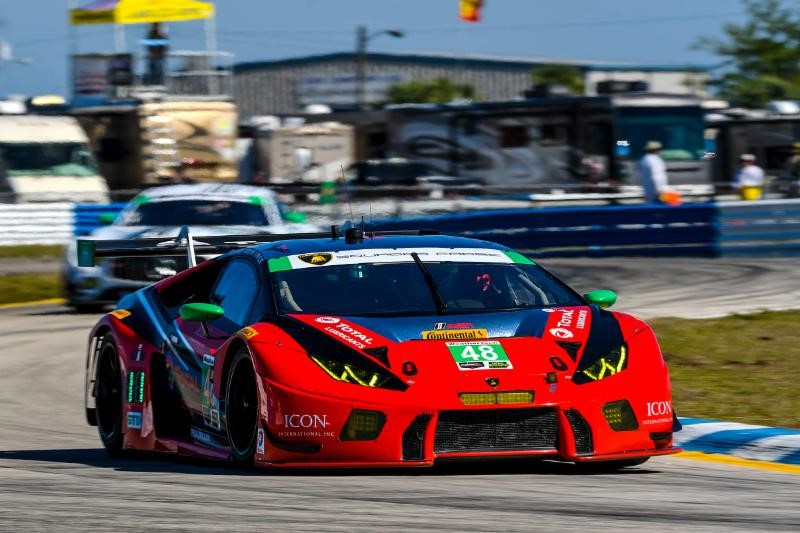 “I’m very proud of our team and the performance of our Lamborghini Huracán GT3,” said Team Owner Paul Miller. “Our team’s effort at Sebring was outstanding in all areas, and to be honest, I believe our team deserved better, much better. Our drivers drove superbly with constant pressure, our crew performed flawlessly on pit stops in one critical situation after the next, strategy and communication from the pit stand was very good. Overall, it was an excellent effort.”

Madison Snow started the race in seventeenth, and in the opening lap climbed to eleventh position. He continuously laid down faster laps than any of the competitors ahead of him, at the end of his stint, Snow brought the No. 48 Lamborghini Huracán GT3 into pit lane from fifth position. Dion von Moltke took over and rejoined, running in tenth for the majority of his stint, despite heavy pressure from Christiana Nielsen in the Ferrari. He brought the car back up to fifth position before Bryan Sellers took over, rejoining in 13th as the field waited for the GTD class pit stops to cycle through.

A yellow flag at two and a half hours running resorted the field, allowing Sellers to have an impressive restart. He jumped from 11th to sixth in the first green laps, and continued his climb to fifth. Fans at Sebring International Raceway enjoyed a tight battle, watching Sellers in the No. 48 Lamborghini Huracán GT3 fight the No. 96 BMW M6 GT3 for fourth position. Sellers worked his way through, pitting from third to let Snow resume the driving duties.

Snow rejoined in 10th, and again quietly but aggressively worked his way up through the GTD field. Pit stops cycled through, and Snow chased down Sage Karam in the Lexus, running in third. Snow took the position before pitting, passing the driving duties back to von Moltke. Von Moltke rejoined in tenth, laying down blistering lap times to gain half a second on the competitors directly ahead of him. Two hours later, Dion and the No. 48 were back in the top five, running a strong fourth place at the halfway point.

The golden hour began to descend on the track with five hours remaining, as von Moltke completed a triple stint. Bryan Sellers took the baton, running in the top three with seven hours of racing complete. With 202 laps completed, Sellers and the No. 48 Lamborghini Huracán GT3 took the lead over the GTD field, which he held until pitting nine laps later. Sellers stayed in the car for an additional stint, taking a quick splash of fuel and new tires to rejoin the field in third.

Snow rejoined the race in third as the final slivers of daylight disappeared. With two hours to go, Snow engaged in a tight, three way battle for position at the front of the GTD field. Snow managed to keep third place away while still gaining time on the first place car. With 70 minutes left on the race clock, the No. 48 made its final driver change, with Sellers joining the field in sixth place. A full course caution came out at the hour mark, bringing the field together. The majority of the GT field pitted at the same time for what would be the final round of pit stops. After a quick splash of fuel and a fresh set of Continental Tires, the Paul Miller Racing team gained a spot in the dash out of pit lane to sit fifth for the final hour.

All in all, it was not a bad day. Fifth place is what we had in the cards. Overall it was a good performance. We were the best Lamborghini, and there was a lot of tough Lamborghini competition this week. It was a really good day for the Mercedes. For us to come out of here with good points was reasonable.

My last stint in the car was one of the most difficult yet most fun stints I have had in a long time. I had Balzan ahead of me, and a lot of pressure behind. That was a stint I will remember for a long time. That was a year’s worth of knowing the car, getting used to it, and going off from there. Our car handled great. I loved it at the beginning of the race, but as the race went on, Bryan and Dion thought it was a little greasy. It was hot out, and slippery out. The third time I got in the car, it was amazing. It was a lot of fun to drive, and had a lot of grip everywhere. We definitely tuned the set up for the end of the race, which was what we needed to do. We had a perfect race.

Fifth place was a good result. I think we can be happy with that for Paul Miller Racing. Our Lamborghini Huracán was good throughout the race. I expected us to be a little farther off in the heat of the day, but the engineers got our tire temperatures and pressures really well, and it was a consistent car that we could attack with for the whole stint. We lacked a little on the newer tires, but towards the end of each stint, the car came back to us, and we were better than our competition. Overall today, we executed highly. Bryan and Madison did an excellent job. Everyone calling strategy and helping us with traffic did a great job as well. We maximized our potential this weekend. We should be happy with our performance. The team earned good points for the championship, which is the overall goal. I am happy I could be a small part of it and hope to be a part of it in the future.