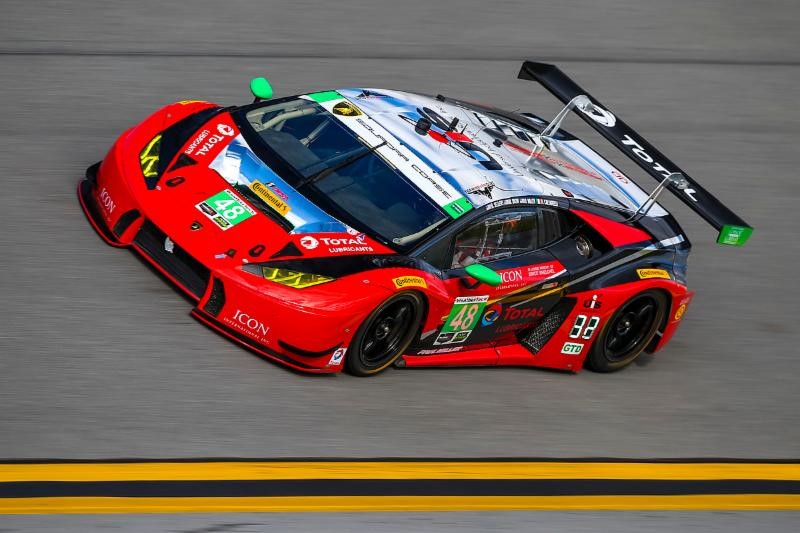 DAYTONA BEACH, Fla., (January 23, 2017) – The 2017 IMSA WeatherTech SportsCar Championship season officially begins this weekend at Daytona International Speedway, and this year, the Georgia based team is coming fully prepared with a strong lineup and a score to settle in their No. 48 Total/Paul Miller Racing Lamborghini Huracán GT3. Full season drivers Bryan Sellers and Madison Snow will be joined by their endurance driver Bryce Miller, Andrea Caldarelli, and Dion von Moltke, eager to continue the team’s momentum from the previous season to claim victory at the Rolex 24 At Daytona.

Last year, the drivers and crew of Paul Miller Racing put forth a monumental effort at the Rolex 24 At Daytona, the longest race on the IMSA WeatherTech SportsCar Championship calendar. The 24 hour long endurance race demanded everything from the Lamborghini, and they fought hard to find themselves leading the GTD class 11 hours in. Contact from another car sent the No. 48 Castrol/UIS Lamborghini Huracán GT3 spinning, forcing the team to spend 90 minutes in the garage for repairs. While the car and drivers performed flawlessly, the victory slipped from their grasp. Not to be deterred, Paul Miller Racing went on to celebrate an impressive season, earning five top four finishes in the final six races, including two podiums and one race win. The GTD team finished third in the final team and driver championship standings, proving to be a season long contender.

Earlier this month, the drivers and crew participated in the Roar Before the 24, the three day test aimed in preparation for the season opening race. The No. 48 car completed over 500 miles in 145 laps, gaining valuable experience and knowledge despite the cold and wet conditions. With a successful test complete, the team has four practice sessions before the big race on Saturday.

“We are encouraged by the seasoning and maturity of our team’s leadership, our crew and our impressive driver lineup,” said Team Owner Paul Miller. “We feel that our team is built for this race. We now have a year under our belt with the Lamborghini platform and we are better prepared than ever to battle through the variety of unpredictable challenges that can arise in this type of race.”

Ready for his ninth Rolex 24 At Daytona, Bryan Sellers is more than ready to get the season started, finish on the top step, and earn the coveted Rolex watch. Starting his second year with the team and Lamborghini Huracán GT3, Sellers has the foundation of familiarity heading into this race season.

“I’m very excited to get back to Daytona and get the season started,” said Sellers. “Daytona is a race that presents every team with unique challenges, making it one of the most difficult races to win. I feel personally that we at Paul Miller racing have a lot of unfinished business. We have come very close a few times, had some great race cars but have just fallen short. There are a lot of good cars this year but we have a great lineup and a strong team, so we will give the best effort we can, and see how far that takes us.”

Joining Sellers for the second year in a row as a full season co-driver, Madison Snow has celebrated two Rolex 24 podiums in his four attempts.

“We were able to have a very strong car last year with a great pace out of all of our drivers,” said Snow. “Being able to be back with the same team, and the majority of the same drivers means we know we can equal our performance we showed last year and better it this year. This is the most difficult event of the year, and there are many challenges we have to face in it, both personally as well as a together as a team. We have the confidence going into it that we can pull off a win but we will have to wait and see. Every year the GTD class becomes more and more competitive so it will make it that much more of a challenge this year with the many new manufacturers we will be competing against.”

This year, Bryce Miller will be entering his tenth Rolex 24, where in 2011, he and Sellers each earned their career best second place finish for the legendary event. Miller will join the team for the Tequila Patron North American Endurance Cup races; a four-race endurance championship within the existing championship.

“I’m happy to join the team again and for the opportunity to still drive a race car,” said Miller. “This is a strong team, so my goal is to support them the best I know how and enjoy the people while doing it.”

Fresh from competition in the Super GT championship in 2016, this weekend’s Rolex 24 will be Andrea Caldarelli’s first. The Italian ran fast and consistent laps at the Roar Before the 24, leaving no doubts to what his performance will be during the race.

“I’m really excited to be part of 2017 Rolex 24 At Daytona,” said Caldarelli. “Of course, I have to thank Paul Miller Racing and Lamborghini Squadra Corse. We had already a great feeling in the previous test, and I am sure we can just improve during the race weekend. Being a racing driver, when I was a child, the Rolex 24 Hours was the first big motorsport event I watched on television, and now I’m glad this year to be involved on track. It’s a dream come true. I’ve attended many endurance races but this will be my first 24 hours so I can’t wait to be back on track!”

Dion von Moltke raced with Paul Miller Racing in 2015, finishing third in the GTD driver championship standings. He returns to round out the team’s line up, looking to repeat his 2013 win at the historic event.

“Paul Miller Racing has always been a team I have been very close to,” said von Moltke.  “After our great year in 2015, where we finished third in the drivers title, we have been trying to find a way to work together.  I am so excited to finally have that opportunity and join them for the 2017 Rolex At Daytona 24 Hours!  They have a fantastic group of guys, who not only excel at their positions, but have great chemistry with one another as well.  They have their Lamborghini working very well and to be teamed with Bryan Sellers, Madison Snow, Bryce Miller, and Andrea Caldarelli is a massive opportunity, all of them are great drivers!”

The 55th Rolex 24 At Daytona at Daytona International Speedway, will take place January 26 – 29, 2017. The race will open with a live FOX Network three-hour telecast beginning at 2 p.m. EST on Saturday, January 28, with the Rolex 24 green flag scheduled to drop at 2:30 p.m. EST.