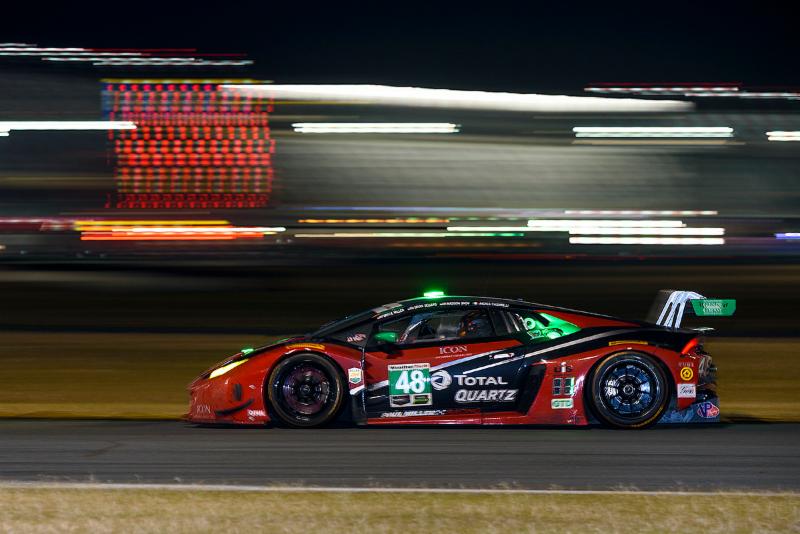 DAYTONA BEACH, Fla., (January 29, 2018) –  While the Rolex 24 at Daytona never fails to provide excitement and hardships, Paul Miller Racing experienced both ends of the spectrum this weekend at Daytona International Speedway. After a challenging week leading up to the main event, and pre-race rebuild on many of the car’s components, the No. 48 TOTAL/UIS Lamborghini Huracán GT3 with drivers Bryan Sellers, Madison Snow, Bryce Miller, and Andrea Caldarelli led 149 laps and finished third at the 2018 Rolex 24 at Daytona.

The team struggled in the practice and qualifying sessions, setting a 16th place starting position. After the final practice, the team made a drastic move. The engine, gearbox, and electronics on the car were all replaced, and in doing so, the team was able to diagnose the issues that had been plaguing them during the lead up to the main event. With the No. 48 essentially rebuilt, the team needed to run the car in order to test all the components to make sure the car was race ready. With the sanctioning body unable to grant the team a hardship lap at Daytona International Speedway, the team loaded up the No. 48 Lamborghini and took it twelve miles south to New Smyrna Raceway to do an all-systems test on the 0.5 mile oval. The 20 minute night test was successful, and the team brought the car back to Daytona International Speedway to make the final preparations for the following race day.

Bryce Miller started the race in 16th, staying clear of any calamity to bring the car back in 13th by the end of his stint. Miller passed the team baton to Madison Snow, who brought the car up to seventh at the three and a half hour mark. With each stint, the team and drivers perfectly executed each stop and each run. Andrea Caldarelli climbed to fifth, where Bryan Sellers resumed the charge, and put on a heated battle with Lawson Aschenbach and the No. 93 Acura to take third position. It was during this night stint that the skies opened on Daytona International Speedway, forcing most of the competitors, including Sellers, to pit for rain tires.

Through the night, the team continued its error free run, allowing the Lamborghini to fully enjoy the cooler track conditions. Ten hours into the race, the field found its second full course caution, which allowed the classes to group back together. In the next green laps, Sellers brought the car from fourth to second, and then closed in on Katherine Legge in the Acura. With 324 laps completed, the No. 48 Paul Miller Racing Lamborghini took the lead. Sellers created a two second lead over the GTD field in the early morning hours, and the Lamborghini continued its dominating run.

At 6:00AM, just over nine hours running, the team took a lengthy pit stop for a customary brake pad change, and once completed, returned to the top of the charts. As the sun rose over the speedway, the team continued to lead the GTD field, but a round of pit stops completed under full course caution changed the GTD class lineup. With six hours remaining, Snow restarted from second, and engaged in a nail-biting race with Mirko Bortolotti in the No. 11 Lamborghini Huracán GT3. The No. 11 took the position and while the Paul Miller Racing Lamborghini stayed close, traffic intervened and created an unwanted gap.

In the final hours, the team never gave up, using strategy, consistency, and quick pit stops to make up for lack of overall speed compared to their competitors. Traffic worked against them as they raced in fourth with two hours remaining, watching the gap to the leaders continue to grow. As Sellers closed in on the final minutes of his last stint, a prototype hit the No. 48 Lamborghini, briefly forcing it off track. Sellers recovered, and confirmed with the team the car was not harmed. With a wave of relief, the team pressed on, and Caldarelli took over for the final stint in fourth, faced with a six second gap to Alvaro Parente in the No. 86 Acura. With the goal of finishing on the Rolex 24 at Daytona podium, Caldarelli found himself sitting in third position when the team called him in for the final pit stop with 45 minutes remaining on the clock.

Caldarelli gave up the podium position, took a tank of fuel and rejoined the field in fourth, with the third place car of Parente 11.676 seconds ahead. With 25 minutes remaining on the race clock, the team’s chances looked bleak, with the exception of the No. 33 Mercedes of Jeroen Bleekemolen. The Grasser Racing Team Lamborghini led the class, and had last pitted at the same general time as the second place Acura and the fourth place Paul Miller Lamborghini. The third place Mercedes pitted ten laps earlier, possibly cutting themselves short to not have enough fuel to finish the race.

The Paul Miller Racing Lamborghini continued to charge forward in fourth, determined to gain every inch of track possible, and it paid off. With twelve minutes remaining, the Mercedes pitted for a final splash of fuel as the Lamborghini sped down the front straight into turn one. The Mercedes rejoined the field and came up short, falling in behind the Lamborghini. Twenty-tree hours and 49 minutes of grueling racing complete, the two cars battled in the final eleven minutes for the third place position. Caldarelli kept the Lamborghini up front for the final laps, crossing the finish line in third place.

In addition to overcoming the technical difficulties the team rebounded from not just 48 hours previously when the car was disassembled in the garage, the podium marked a special moment in Lamborghini’s history. With the No. 11 Lamborghini taking the win, the manufacturer won its first 24 hour endurance event, able to celebrate with two of their teams finishing on the podium. While Paul Miller Racing did not get the coveted win, the team rebuilt a race car overnight, and went on to lead an impressive 149 laps, and finish on the podium for the first race of the IMSA WeatherTech SportsCar Championship.

The next round of the championship, the Twelve Hours of Sebring, will again test the endurance of drivers and teams, racing half the distance of the Rolex 24.  Sebring International Raceway (Fla.) will host the event, March 14-17. Full time drivers Bryan Sellers and Madison Snow will be joined by Lamborghini Squadra Corse driver Corey Lewis. For ticket and event information, visit imsa.com.

I’m proud of the entire team, of their effort and the excellent podium result. We are also very pleased that if we couldn’t be on the top step, then Lamborghini could enjoy the hard earned victory! On our team, everyone worked hard toward the goal of delivering a good race car for the race and plotting and planning the proper path. Everyone executed magnificently! We had a good race car early and in the middle section of the race, but then Sunday morning we had issues that definitely affected our pace. In spite of that, we were able to hang on the lead lap and apply some pressure. This is a team sport and all our guys earned this one!

I’m really happy to be on the podium today. It was the best result we could get. We knew that some of the other cars were a bit stronger than we were, but the team did a good job with nice, consistent pit stops. We made it through without big drama, we picked up good points, and we get to stand on the podium for the biggest race of the year. That’s pretty awesome.

We thought we had a chance for the win in the middle of the night, but knowing how long the race is, you can’t get your hopes up. Things change really fast here at Daytona, and that’s exactly what happened at the end of the race. We didn’t think we were going to be on the podium because we weren’t the fastest car, and then all of the sudden the No. 33 car had to come in for fuel. Even then, we were worried it would chase us down, but we ended up on the podium. A podium at Daytona feels like a win. It’s just nice to be up there. We had a great car, and we’re glad we were able to finish the event.

That was a very challenging and competitive race. It was surprising to our team, as well as the rest of the competitors how few cautions there were. The few cautions we did get didn’t play too much into our favor, and that’s how it goes sometimes. For us to come away with a result like this given the Balance of Performance at the moment, I think this result was outstanding and speaks volume about our teams and performance, to be able to put in a result like this. It’s been an awesome opportunity to come back to the team and be a part of this lineup. I had a lot of fun driving again and being a part of it. I wish Bryan and Madison the best in their championship moving forward.

I’m very happy that we are here to celebrate the podium after 24 hours. It was a really difficult race. It was good that we led the race for as long as we did. It was a little bittersweet, but today was the maximum we could achieve. We had problems our first day here, and the guys did an amazing job, and worked all night to get the kind of car we wanted and put us in good shape. The first 12-15 hours were fantastic. The end of the race was tough, but I’m so happy we could score this podium for the team. They really deserved it. 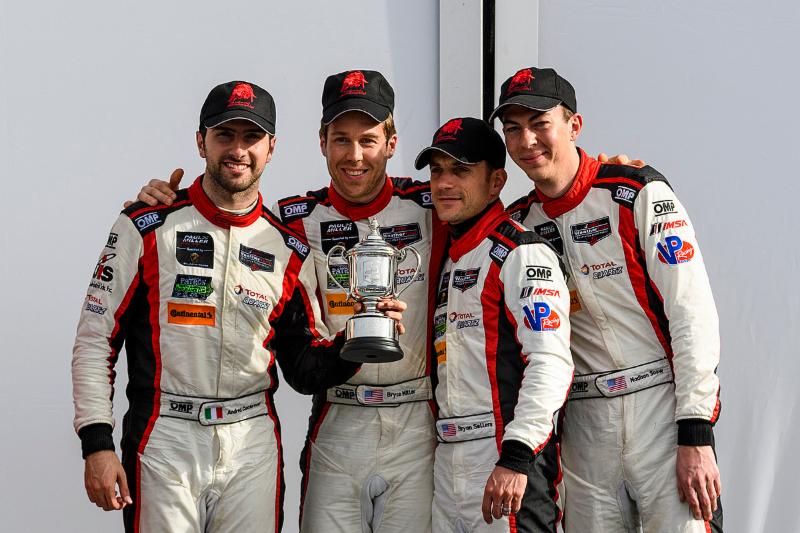