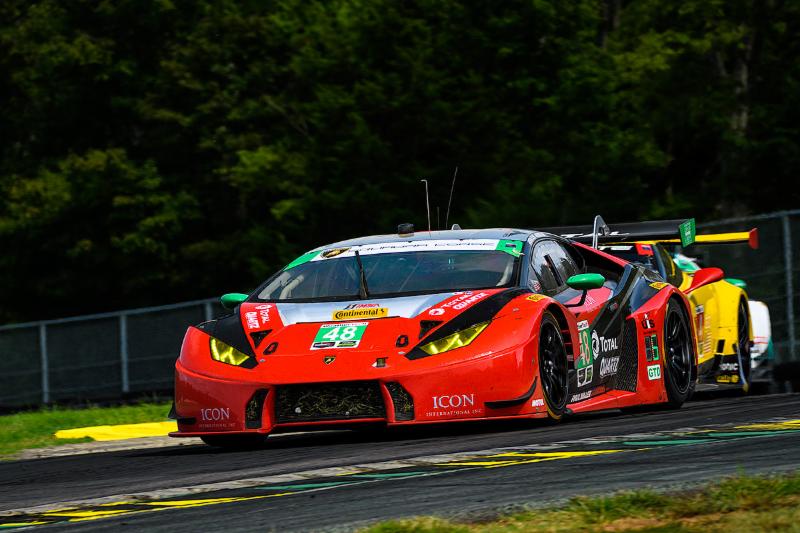 With temperatures in the high 80s with almost 100% humidity, Madison Snow and the No. 48 TOTAL Lubricants/UIS Lamborghini Huracán GT3 took the green flag in fifth position, and without the outright speed of the other cars, Snow settled into seventh place in the opening laps. He put heavy pressure on the No. 86 of Mario Farnbacher for position, while fending off pressure from the No. 44 of John Potter. The No. 86 continued to burn off his tires as Snow kept his tires in better condition throughout this 50 minute stint.

Snow pitted from third in the middle of the first pit window, and co-driver Bryan Sellers took over with a full tank of fuel and a fresh set of tires. Sellers began his stint in seventh, and moved up to sixth during the first caution period when a perfectly executed stop by his crew brought him out of pit lane in sixth ahead of the No. 86 Acura. Ten minutes later, the No. 86 of Katherine Legge had contact with Sellers, bringing him into pit lane for an assessment of the damage and a new set of tires. He rejoined in ninth with 50 minutes left on the clock and both of the closest contenders in the championship ahead of him in third and sixth. Determined to reclaim as many championship points as possible, Sellers pressed on.

He gained a position when the No. 33 of Jeroen Bleekemolen got caught in side-by-side racing and went off track, rejoining behind Sellers. Sellers expertly used traffic to his advantage, allowing the faster GTLM class cars to separate himself from Bleekemolen. Chasing down the No. 96 of Robby Foley, Sellers had the advantage of better tire conditions, and made quick work to claim seventh from the BMW with 24 minutes remaining in the race. Attrition continued to strike other competitors, causing the No. 44 of Andy Lally to serve a drive through penalty, moving Sellers up to sixth. The No. 48 continued to show increasing strength and consistency in the final stint of the race, and Sellers jumped back into the top five with 12 minutes to go, passing the No. 93 of Lawson Aschenbach. In the final ten minutes, the No. 33 of Bleekemolen passed Sellers, moving him to sixth place. Sellers finished in sixth position, three positions behind the No. 86 Acura of Katherine Legge.

Again proving the consistency of the No. 48 Lamborghini Huracán GT3 and its ability to improve performance over the course of a difficult race, Paul Miller Racing finished the Michelin GT Challenge as the points leaders, a position they’ve held since the Twelve Hours of Sebring in March. The gap over the Acura currently sits at thirteen points with two races remaining and a maximum total of 70 points remaining to be assigned for the IMSA WeatherTech SportsCar Championship.

WeatherTech Raceway Laguna Seca will host the penultimate round of the 2018 championship September 7 to 9. All three classes will reunite to compete in the two hour, forty minute event, the final sprint race of the current IMSA WeatherTech SportsCar Championship, before closing out the season at Petit Le Mans in October. For event information, visit imsa.com.

Bryan Sellers
It wasn’t particularly a great day for us, and a bad points day. But at the end, you look and think that we had to have one of these coming. There was going to be a time where we struggled in the race, where the speed wasn’t there, and this time it got the better of us a little bit. It wasn’t by lack of effort. Everyone on this team gives their absolute best and while we didn’t have the quickest car, the guys were good in the pits and got us a couple of positions. You just hate the days where they gain the positions and you can’t keep it for them. Madison and I did the best we could and today we were fortunate to walk away with sixth and not a little bit worse than that. We have to reload, figure out where we’re at, and go from there.

Madison Snow
At the end of the race, we started to work our way back up. We had an issue when we got hit by the 86 and that took us down quite a bit. We did our standard process of staying out of trouble, running clean, and that moved us up a couple of positions at the end. It wasn’t enough to get on the podium, but it was cool to see us bounce back. The car was good, but not as competitive and as quick as the other cars we were racing against. We had good pit stops and good strategy; we pitted at the end and took on two tires, which was a great stop for the crew. They did an excellent job this weekend.