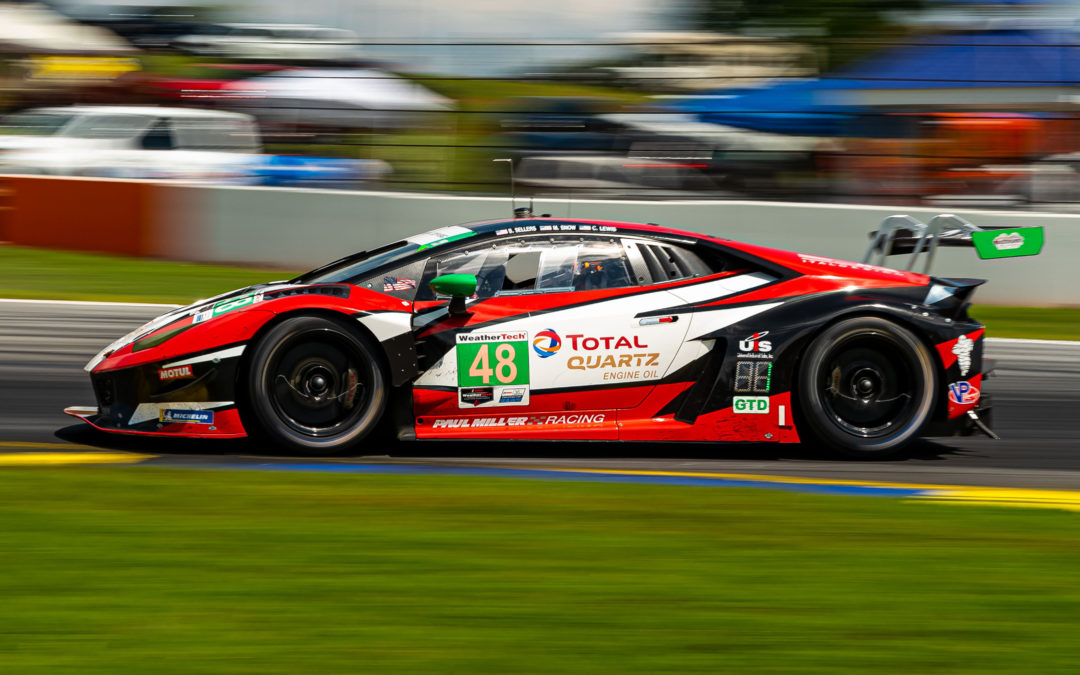 BRASELTON, GA (Thursday, October 15, 2020) – The No. 48 Paul Miller Racing Lamborghini squad returns to action this weekend in the IMSA WeatherTech Championship SportsCar Championship in the team’s quest to claim the Michelin Endurance Cup.

Making their fourth 2020 appearance in the IMSA GTD field, the Total lubricants-backed Lamborghini Huracan GT3 EVO team is looking to extend their eight-point advantage at the top of the Endurance standings this weekend at Michelin Raceway Road Atlanta in the 10-hour Motul Petit Le Mans.

The driver lineup of Madison Snow, Bryan Sellers and Corey Lewis have already tasted victory once this year, scoring right off the bat in 2020 with a win at the prestigious Rolex 24 at Daytona in January. The trio backed up that performance with a second place finish in last month’s Michelin Raceway Road Atlanta six-hour race to solidify their lead in the Michelin Endurance Cup with two endurance races still to run.

“We were really happy with the way we left the Michelin Endurance Weekend last month at Michelin Raceway Road Atlanta and we’re hoping for more of the same this weekend at Petit Le Mans,” Paul Miller Racing founder, Paul Miller, said.

“As a team, we’re focusing on looking ahead and finishing strong in these last two Endurance Cup races. The competition is really tough in the IMSA GTD class, but luckily we have a lot of laps around this place—since it is our home track—and hopefully that will benefit us in the race. The pressure is on for everyone and Saturday’s 10-hour will definitely be a race to watch!”

The Paul Miller Racing team currently sits on 27 points in the standings, eight ahead of their fellow Lamborghini team, the No. 44 Magnus GRT car.

The race will be shown live on NBCSN from 12:30 PM to 6:30 PM Eastern and from 9:30 PM to 11:00 PM. Live flag-to-flag coverage will be available on TrackPass on NBC Sports Gold and on the NBC Sports App with authentication starting at 12:30 PM Eastern Saturday, October 17th.

Madison Snow
“Petit is one of the best races of the year. You need to be perfect at every aspect of endurance racing over 10 hours. We came close at the 6 Hour, but an extra four hours of racing can only help! Since the race, we’ve evaluated what we can improve upon, and feel really good about coming back for Petit. While the competition may be focusing on the overall GTD Championship, we are fighting hard for the Michelin Endurance Cup. With 12 other cars in the class, it will be a hard fight, but we are ready for it.”

Bryan Sellers
“Petit week is one of my favorite weeks on the schedule. 10 hours is nearly the perfect distance for a race. It’s long enough that everything comes into play. Speed, strategy, pit stops, and consistency. We weren’t quite good enough to get the job done at the six hour, but we have all spent a lot of time looking at where we were weak and hopefully have been able to improve in those areas. There is a massive championship on the chase and they will all be pushing hard. We need to make sure we are doing the same. With Pfaff coming back GTD will finally be back at full strength. This will be a tall order. We will be ready for it.”

Corey Lewis
“Very much looking forward to this weekend, Michelin Raceway Road Atlanta is one of my favorite tracks on the schedule! We’ve shown that we had strong pace in the 6hr earlier in the year and look to improve one position better this upcoming weekend. It’s always action-packed and I look forward to going under the lights! With only two more NAEC races left, the plan is to continue to build our points lead in the championship.”