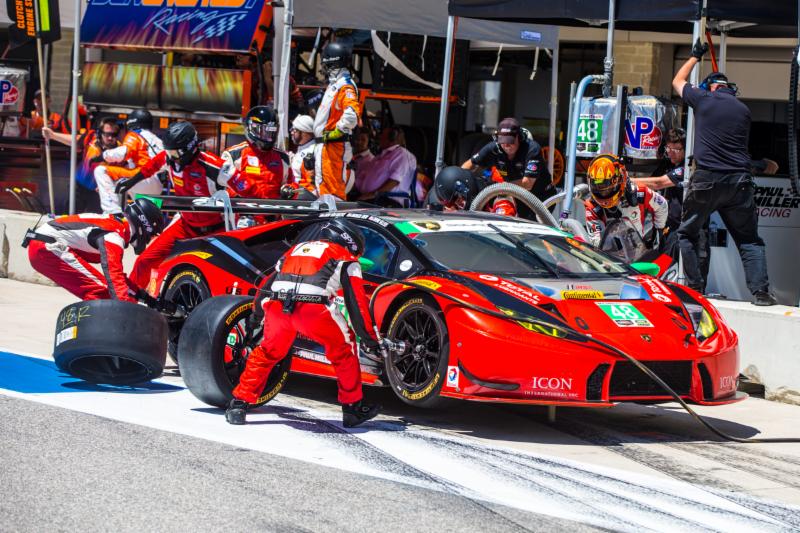 AUSTIN, Tex., (May 6, 2017) – Saturday at Circuit of the Americas, Paul Miller Racing ran a perfect race to earn their second top five finish of the 2017 IMSA WeatherTech SportsCar Championship season. Clean runs from the No. 48 Lamborghini Huracán GT3 of Bryan Sellers and Madison Snow combined with flawless pit stops and strategy calls resulted in a fourth place finish at the Advance Auto Parts SportsCar Showdown.

Snow qualified the car in third, but a disqualification ahead moved the No. 48 to start on the front row in second. Snow kept second position, safely avoiding a GT incident in turn one of lap one. He ran a quiet stint, maintaining position and creating a gap over the cars behind him. The first round of pit stops began, and Snow pitted the car in first. The No. 48 received a full service stop with fuel, new tires, and a driver change. Sellers rejoined in third as the race went full course caution, but moved up to restart second with 90 minutes remaining.

Sellers held tight to second position, as the two cars behind him battled for third. The No. 33 Mercedes won the fight, and after another battle, overtook Sellers for second. With one hour remaining, the No. 48 Lamborghini Huracán GT3 pitted for its final stop, beating the No. 63 Ferrari out of pit lane. He rejoined in eighth, but the rest of the field followed suit to make their final stops. As the field cycled through, Sellers ran in second place, defending his position from the No. 63. With 30 minutes remaining, the No. 63 made the pass, shuffling the No. 48 to third. Sellers held the position to the final ten minutes when a car on fire on course brought out a full course caution. The field went back to green with two minutes remaining, and the No. 48 was ultimately passed for third place, narrowly missing out on a podium finish.

“We had a great team effort today,” said Team Owner Paul Miller. “We had great driving, our pit stops were fabulous, and strategy was excellent. Even though we only came in fourth, I’m very pleased with the effort today. We showed everything we could with the car we had to work with, and I’m very happy with the team. It was depressing to see us get passed late for a podium position, but we did the best we could.”

Detroit, Michigan will host the fifth round of the IMSA WeatherTech SportsCar Championship. The Chevrolet Sports Car Classic will run one hour and 40 minutes on the temporary street circuit of Belle Isle, June 2-3. For schedule information, visit imsa.com.

Bryan Sellers
It was a good day for the team. We ticked all the boxes we could have ticked today, and the race car was reasonable. The pit stops and strategies were phenomenal, and it is hard to be disappointed on a day when you did everything right and get a decent result. On the same hand, it is disappointing when you do everything right, check all the boxes, and don’t get the result that you want. Today was just one of those days. When you look at the top three cars, they were in a class of their own. We did the best of the rest, and I don’t meant that as a bad thing. We did a great job. It will be difficult moving forward because we have to continue to find the areas in which we can improve and chase those guys down. We’ll go back after this weekend, look at it, and try to make it right moving forward.

Madison Snow
It was a great race for us in that we didn’t make any mistakes. We ran the best race we could have ran. Bryan and I pushed as hard as we could every single lap to get a gap. For me, the goal was to get the biggest gap I could to give Bryan space on track for us to hold on. The first stint went fine and was drama free. It is a bummer we were able to run a perfect race and end up in fourth.