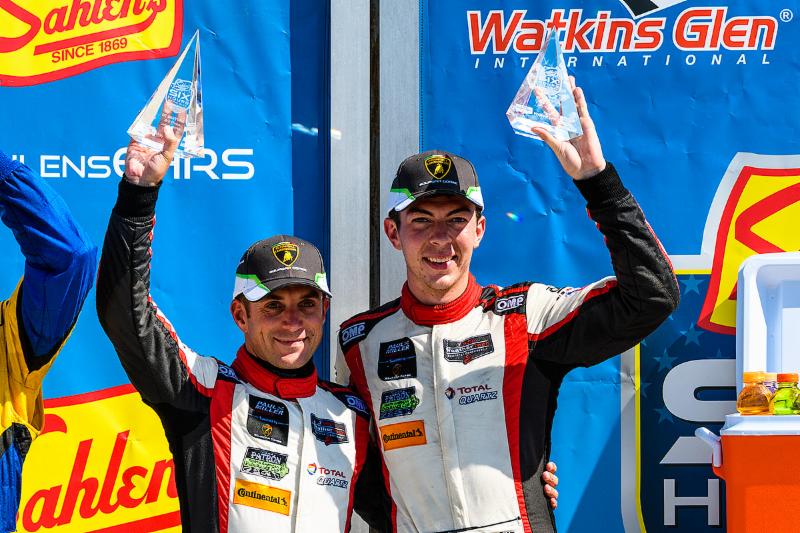 WATKINS GLEN, N.Y., (July 2, 2018) – In sweltering conditions at Watkins Glen International, Paul Miller Racing earned their fifth consecutive podium of the 2018 IMSA WeatherTech SportsCar Championship on Sunday. Bryan Sellers and Madison Snow drove in one of the most physically challenging events of the season, bringing the No. 48 TOTAL Lubricants/UIS Lamborghini Huracan GT3 across the finish line in third place at the Sahlen’s Six Hour of the Glen. Having never finished outside the podium yet this season, the American duo continues to lead the GTD class championship by one point.

The field took the green flag at 9:45AM and the Paul Miller Racing Lamborghini narrowly escaped calamity from spinning prototypes in the opening lap. Madison Snow started in seventh and made it through the incident without any contact, and without losing position. As the race resumed, Snow found himself immediately behind the No. 86 Acura, the car over which Paul Miller Racing held a seven points lead in the championship. Snow reported the handling of the No. 48 Lamborghini was ideal as the field spread out, creating a gap between him and the competitors. Taking great care to preserve his rear tires, Snow maintained consistent lap times until the first full course yellow came out 47 minutes running.

Snow pitted in seventh for a full service stop, and quick work from the view allowed the No. 48 to gain a position in pit lane, rejoining in sixth with Bryan Sellers at the wheel. By 11:00AM, temperatures continued to climb to 86 degrees, and the track temperature reached 110. Despite the increasing heat, Sellers stayed cool and collected, running fifth behind Alvaro Parente in the 86. The next round of pit stops began to cycle through, and Sellers shuffled up to lead the class before pitting for tires, fuel, and a fresh water bottle.

In his next stint, Sellers and Katherine Legge battled hard for second position, racing side by side through the turns. With the points battle in mind, Sellers tucked behind Legge, and she charged after the race leading No. 15 Lexus and took the position. Temperatures climbed another five degrees as Sellers also worked to pass David Heinemeier Hansson and chase after Legge’s Acura. Legge pitted for fuel, handing the lead over to Sellers, where he took advantage of clean air, gaining as much ground as possible.

Sellers pitted with a 46 second lead over the 33 Mercedes of Luca Stolz, and Madison Snow resumed his driving duties at the halfway point. The young American rejoined in fourth, staying close to the No. 25 Lexus of Mario Farnbacher. Temperatures continued to climb, hitting 87 degrees at the halfway point. With a track temperature of 118.9 degrees, Snow reported to the team that the tires were performing well. He made note of a loss of grip from the morning session, but with a 15 degree increase, the level of grip he was experiencing was expected.

Another full course caution came out near the beginning of Snow’s stint, and he assumed the lead as Legge and the Acura pitted for a driver change. Snow’s 2.5 second lead extended after the second place car of Jeroen Bleekemolen served a penalty for spinning his car’s wheels during a pit stop. This moved the No. 86 Acura and Alvaro Parente, but Snow put in strong laps to keep his lead to over five seconds before concluding his run. Despite the heat and the pressure from his competitors, Snow pushed forward to run a flawless double stint in the heat of the day, allowing Sellers to recuperate for the final push. He pitted for tires and fuel and rejoined to fight for third behind the No. 29 Audi and the No. 86 Acura. He completed his stint in fourth place, and Sellers took over under caution with less than an hour to go, ready for the final push after five hours of racing.

With less than forty minutes remaining in the race, the GTD class leader was called in to serve a penalty, moving the Paul Miller Racing Lamborghini back up to third position. Sellers continuously put pressure on Parente, but the Lamborghini lacked the overall speed to make the pass. The No. 48 TOTAL car crossed the finish line in third position, successfully using strategy and consistency to be competitive for a podium.

As their impressive podium streak continues, Paul Miller Racing keeps the GTD class lead by one point heading into round six at Canadian Tire Motorsport Park. The crew will have a quick turnaround to prepare for the Mobil 1 SportsCar Grand Prix. The first practice begins Friday, July 6, and round six of the IMSA WeatherTech SportsCar championship goes green on Sunday, July 8 at 2:05PM Eastern. The race will air on FS1, tape delayed to broadcast from 4:00PM to 7:00PM Eastern. International audiences can stream the race live in its entirety, and fans in the United States can watch track and in car feeds live on imsa.tv. For more information, visit imsa.com.

Madison Snow
What a good race! In practice, we didn’t quite have the pace to win the race, but once we got into the race, we knew we could be consistent and run the whole race, and get faster in the end. That’s how we’ve been able to get on the podium at all the other races this year. It was definitely hot for us to only run two drivers, but it worked out just fine. We’ve had a great season so far, and everyone has done a great job to just keep this momentum going.

Bryan Sellers
Today is a really good day. It’s hard to keep finishing behind the 86 car race after race. We’ve struggled for pace, but this is what happens when you persevere and execute, and put it in the team’s hands. They did an excellent job. As always, Madison was down in the trenches doing the dirty work. He did a double stint in the middle of the race, and it was phenomenal, especially for being at the hottest point in the day. That allowed me to recover and fight hard in the end. Another podium is great. I’m really proud of all the hard work everyone has put in this season and where it has brought us.