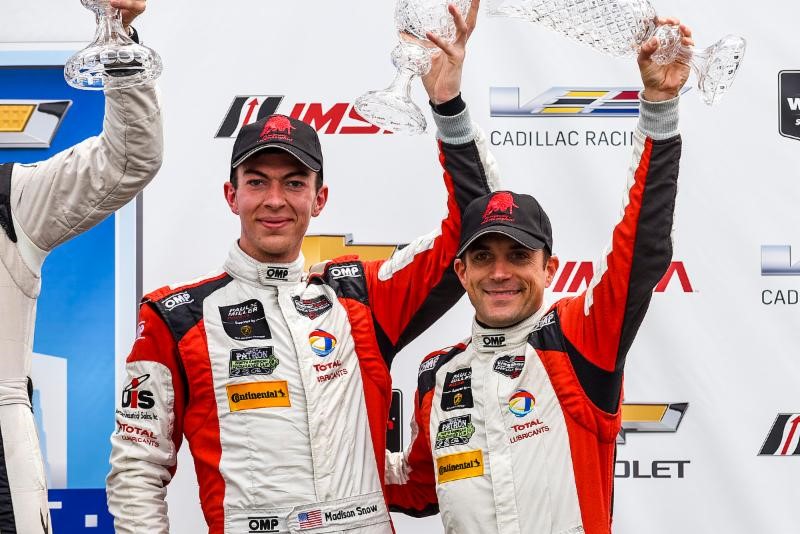 Detroit, MI., (June 3, 2017) – Saturday afternoon at the Chevrolet Sports Car Classic of Detroit, Paul Miller Racing put forth an impressive performance to finish third place, earning their first podium of the 2017 IMSA WeatherTech SportsCar Championship race season. The successful finish on the demanding street course moves the team and drivers Bryan Sellers and Madison Snow up from fourth to third in the driver and team championship standings.

“Bryan and Madison drove a fantastic race,” said Team Owner Paul Miller. “They kept it clean, which is really difficult to do here. Madison’s stint was just incredible to watch. This is our third podium here in four years, so we as a team like Detroit a lot. I am so happy for the guys. Everyone did a great job to make it happen.”

The field took the second green flag of the race with hour remaining on the race clock. The GTD field remained packed tight for the next 30 minutes. There may have been minimal passing, but the battles to maintain position were heated as the time remaining continued to count down. Trouble struck the race leading Audi R8 LMS with 24 minutes remaining, forcing the car to retire due to a mechanical issue. With the entire GTD field moving up one position, Snow found himself battling for the final podium position with Jeff Segal in the No. 86 Acura NSX. The young American put forth arguably the best performance of his career, staying close to the Acura for the following 20 minutes, looking for any window to make his move.  He found his chance in the final three minutes, making a daring pass on the inside of turn seven, taking the podium spot with just two laps remaining in the race. From there, Snow pulled away, bringing the team their first podium finish of the 2017 race season.

“It’s super important to look at the job Madison did today,” said co-driver Bryan Sellers. “He was phenomenal in the last stint. He hounded that Acura and made the move when he had the opportunity. It is days like today where you are happy to have a teammate like him. What a strong performance from the team. We are so happy with the result today.”

Despite the high-pressure stint, Snow enjoyed the battle on the 2.3 mile, 14-turn temporary street course.

“That stint was so much fun,” said Snow. “Although there was not a lot of passing, there was still a lot going on out there. Bryan and I like this race. It’s such a fun track to race on, but so difficult to pass because everyone in our class is so close on pace.”

The Chevrolet Sports Car Classic of Detroit will re-air Sunday June 4 at 9:30AM Eastern on FOX Sports 1, and will also be available for later viewing on IMSA’s YouTube channel.

Paul Miller Racing will continue its fight in the IMSA WeatherTech SportsCar Championship later this month in New York at Watkins Glen International June 29 to July 2. The 3.4 mile track will host a six hour race, the third of four endurance rounds on the 2017 race season calendar. For more information, visit imsa.com.