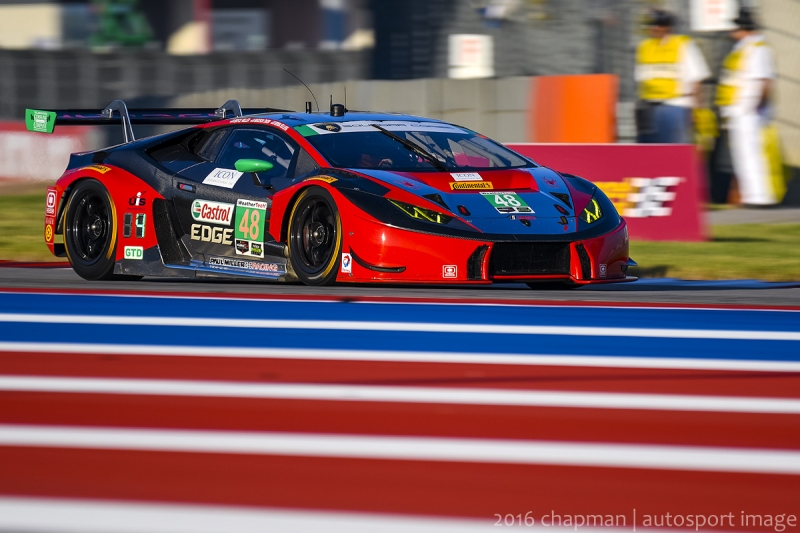 The runner-up result – the team’s second-straight podium finish in the IMSA WeatherTech SportsCar Championship following a victory one race prior at VIRginia International Raceway (VIR) – came after the second-place Porsche ran out of fuel on the final lap of today’s race.

Sellers, who drove the No. 48 for just over the final 50 minutes of the race, was in third place and applying heavy pressure on the fuel-conserving Porsche throughout his stint.

He charged from eight seconds back to just a few tenths-of-a-second behind the Porsche, close enough to attempt a pass for position in the last lap or two.

Sellers pounced when the Porsche faltered on fumes on the white flag lap and joined Snow and their Paul Miller Racing teammates in once again giving Lamborghini a race-best result in IMSA’s competitive GT Daytona (GTD) division.

Snow started the race from sixth on the grid and grappled with a greasy racing surface, an overall lack of grip and typically hot and humid Texas temperatures.

Undeterred, and a fit 20-years-old, Snow persevered through the conditions and answered the call when the team elected to keep him in for a second stint. He ended up driving the first one-hour and 47 minutes of the race.

“It was a really good run we had out there,” Snow said. “The track was really greasy, so a lot of it was getting a handle on it and knowing how to monitor your tires so you had something left. The end of the second stint was definitely very tough. I was getting lap times close to the cars behind me and just needed to maintain that pace. It was a lot of work but it allowed us to stay on top. That’s a big reason why Bryan was able to bring home a second place finish.”

Top pit work by the Paul Miller Racing team was key in returning Sellers to the race in third after the final stop.
“I feel good,” Sellers said. “We would have liked to have peaked like this a little sooner this season, but I think now we’re really starting to figure this whole thing out. It has all really started to come together, we know what works for the program and what works for me and Madison as well.”

Sellers and Snow have really clicked as a driver combination this season, their first year as co-drivers and first season with Paul Miller Racing.

“Bryan hopped in the car and did a great job,” Snow said. “There was definitely a lot of pressure on him at the end of the race, and it definitely was hard for everyone out there to keep it on the track, turn consistent laps and not making any mistakes.”

Sellers has equal praise for his teammate that just happens to be 14 years younger than him.

“Over the past two races, the big thing has been how Madison has performed early in the races,” Snow said. “We’ve had good strategy, and he’s given us good track position, so from there it’s just my job to go hang on to what he’s established.”

The VIR win and today’s runner-up showing – part of Paul Miller Racing’s consistent run of four top-five finishes in the last five races – have combined to make the No. 48 team and drivers late-season contenders for a top-three finish in the 2016 GTD championship.

With only the season-ending Petit Le Mans in two weeks at Road Atlanta remaining on this year’s calendar, Sellers, Snow and the No. 48 have jumped to fourth in the GTD team and driver standings with 264 points.

While the leading Ferrari team has all but clinched the 2016 title, the No. 48 team trails the third place team and drivers by a point and are only three points out of second place.

“We didn’t have the outright speed today to chase down the winning BMW, but I also don’t think we had a second-place car,” Sellers said. “When you can get a result when a result shouldn’t be there, that is the mark of good team performance. I couldn’t be happier about today. Everyone did a great job, from the stops to the pit stand to Madison and myself. Now we go on to Petit Le Mans, the one race everyone wants to win at the end of the year.”

“I’m super excited for Petit Le Mans,” Snow said. “It’s definitely one of my favorite races of the year. I love Daytona and I love Petit. I’m excited to go to Atlanta and work with a home team that you know has some advantage with data and so many laps around there. It’s an advantage we’ll have, and I’m excited to be with Bryan too. I’ve been on the podium at Petit with him before but it was with different teams and classes.”

Petit Le Mans will be run at Road Atlanta on Saturday, October 1, and is scheduled to go green at 11:10 a.m. EDT. Broadcast coverage begins on FOX Sports 1 (@FS1) that day at 11 a.m. EDT to kickoff continuous live coverage of the 10-hour race throughout the day on @FS1, FOX Sports 2 and IMSA.tv.