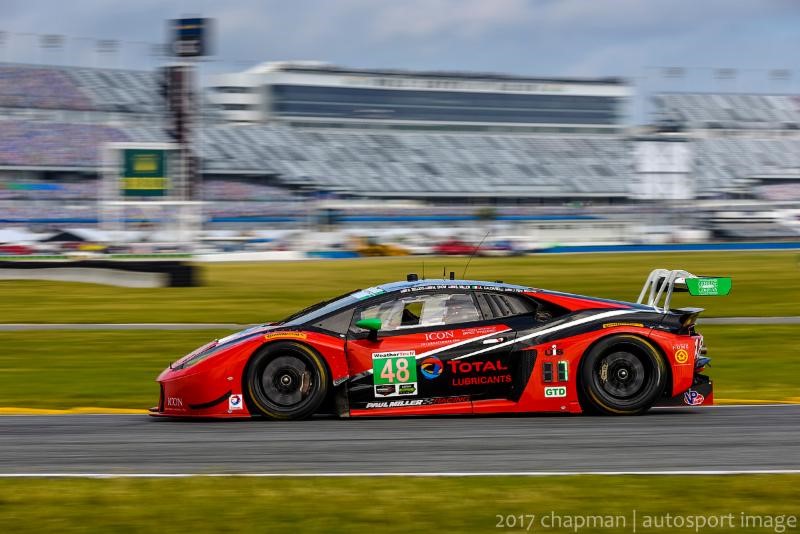 DAYTONA BEACH, Fla., (January 26, 2017) – Today at Daytona International Speedway, Bryan Sellers qualified the 48 Total/Paul Miller Racing Lamborghini Huracán GT3 for the 55th Rolex 24 At Daytona. Sellers and the team will open the 2017 IMSA WeatherTech SportsCar Championship from 12th position, after qualifying 1.3 seconds within the GTD class leaders in a competitive field. Sellers ran eight laps, setting his fastest lap of 1:48.496, on his fourth lap of the 3.56, 12 turn road course.

While 1.3 seconds covering twelve positions may be relatively close, the drivers and team of the No. 48 feel more work can be done to gain more speed for Saturday’s race.

“It’s difficult right now,” said Sellers. “We’re really struggling to find our way. I can’t really figure out why things have changed so much from the Roar Before the 24 to where we are now. It’s certainly different. At the moment, the car is really a handful to drive, as the balance lacks in drivability. This is not where you want to be heading into a 24 hour race, but we have time to address it and figure it out.”

Two weeks prior, the team showed great speed and balance in the pre-season test, confident in the additional progress to be made this week. Before the field goes green on Saturday afternoon, the team will have 150 minutes in two practices to continue to develop their race package. Sellers will be joined by full season co-driver Madison Snow, and endurance additions Bryce Miller, Andrea Caldarelli, and Dion von Moltke. Throughout the 24 hours of racing, the five drivers will alternate shifts, resting, eating, and re-energizing when not behind the wheel.

The 55th Rolex 24 At Daytona is scheduled to go green at 2:30PM Eastern on Saturday, January 28th. All 55 competitors will be pushed to the limits of endurance for 24 hours of racing, determined to be the first to cross the finish line. The first portion of the race will be broadcasted on FOX starting at 2:00PM. For full TV Broadcast information for all 24 hours, visit imsa.com.