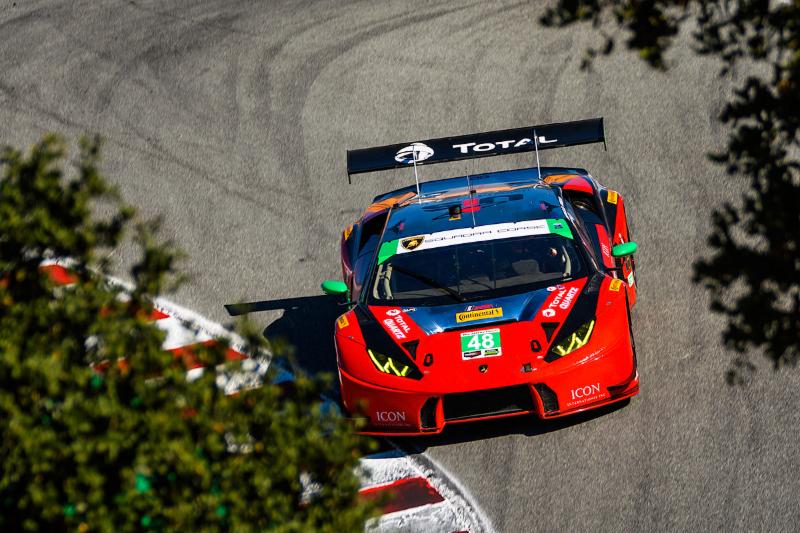 Bryan Sellers, Snow’s co-driver, placed the car in first position in the opening practice on Friday morning, with a best session lap time of 1:25.403. Snow bettered that fast lap in the final practice, setting a lap time of 1:24.884. While the team’s normal strategy has been to set up the car to endure better over a full race stint, set up changes were made for qualifying to give Snow his best possible effort for the 15 minute qualifying session. Snow improved yet again in qualifying, running a lap time of 1:24.595 on his fourth lap, to place the team in second position for Sunday’s race.

In the final two races where every point counts, Sellers, Snow, and the Paul Miller Racing team will have two hours and forty minutes to pass the No. 86 and stay up front, expanding their 13 point lead over the Acura. The Lamborghini team has held a firm grip on the point standings since March, after securing victory at the Twelve Hours of Sebring, and earning an additional four podium finishes.

This weekend, the team will host over 35 employees, guests, and customers of TOTAL Lubrications, a trusted sponsor and partner of their 2018 season. The Continental Tire Monterey Grand Prix will air live on Sunday, September 9 FS1 from 5:00PM to 8:00PM Eastern. Live audio coverage from IMSA Radio will be available for every session from the Radio Le Mans team, available worldwide online and on the IMSA app. International audiences will be able to watch the race stream live in its entirety on imsa.tv. For full schedule information, visit imsa.com.

Madison Snow
It was a great qualifying session. We definitely didn’t think we had that much pace in the car, but we made some changes for qualifying to get an outright pace instead of our usual goal of setting up for an overall stint. That helped us get a good qualifying run in. It’s nice to be starting up front, so we’re excited for the race to come and hope we can get the car up there and ahead of the No. 86.

Bryan Sellers
That was a great qualifying effort from Madison. It’s pretty cool to sit back and watch when a lap like that gets put together. You give credit where credit is due: The car was good, and it was a great job by Madison. It was as near of a perfect lap as we could have asked for. It puts us in a good track position for tomorrow, and tire degradation is on everybody’s minds. We have the first hurdle out of the way, now we’ll see how the race unfolds and where we’ll end up.