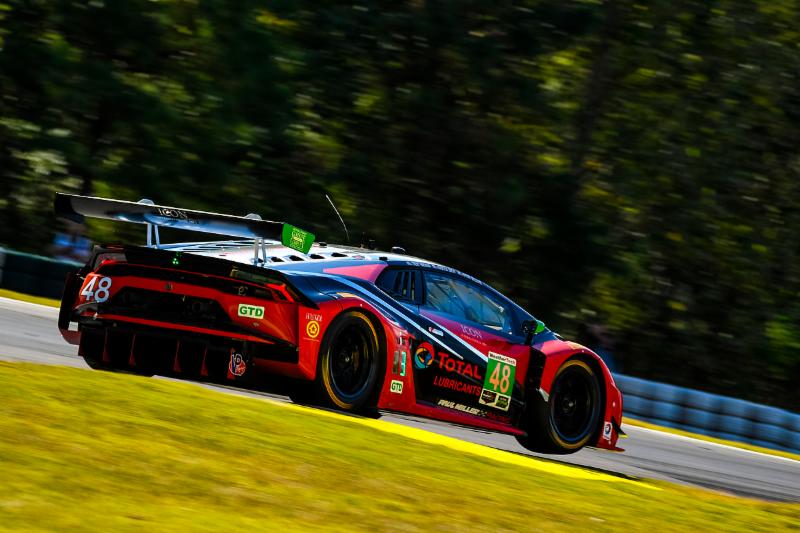 The GTD class in the IMSA WeatherTech SportsCar Championship has been highly competitive all weekend, with thirteen of the seventeen cars in class qualifying within a second of the fastest lap time. Snow qualified with a fast lap time of 1:21.393, getting within 0.732 seconds of the class leader. Focusing up setting up the Lamborghini Huracán GT3 to perform best over the entirety of the 10 hour endurance event, outright speed was not the focus for the 15 minute qualifying session.

The forecast for the entirety of the race calls for overcast skies with a slight chance of rain. With varying temperatures, each team will be faced with the challenge of setting up their cars to have strong balance in the warm as well as cold conditions for all ten hours. The broadcast for the finale event will run on FOX Sports 1 from 10:30AM to 11:30AM Eastern, then switch to FOX Sports 2 from 11:30AM to 2:30PM. There will be a 90 minute gap and coverage will resume at 5:00PM and go to the finish at 9:30PM. For more information, visit imsa.com.

The times have been tight all weekend. We have a lot of cars in the field here for this race, which is a lot of fun to have out here. We ended up being down in the charts in qualifying, but not far off the pace. We’re mid-pack, which is fine for a ten hour race. We need a car that is consistent and good at the end of a stint. That’s what we’ve been working for this whole time, instead of a car that’s quick for three laps. We’ll go out there, fine tune a few things in the warm up and go out there and race.

Obviously you want to qualify up front, and we’ve had a lot of races where we’ve done that this year and it didn’t convert into anything for us. At the end of the day, it doesn’t mean a lot. What’s important is making sure we have a good car for the race. We fell a little behind with car set up early in the week, and we’re trying to make up for that right now. We had a feeling qualifying would go one of two ways. It looks like we have to find a way to get a little bit more. It’s fine. It’s a long race, and we need to focus on the race itself. Madison has a lot of experience in this situation: to qualify and be able to help lead us into what we need to do for the race in terms of balance. We’ll address the situation and be ready for tomorrow.

I want to thank Paul Miller, Mitch Simmons, Bryan Sellers, Madison Snow, and the whole team for giving me this opportunity and for allowing me to be a part of the program. For me, this is not only an opportunity to have a shot at a good result in a big endurance race, but it’s a great opportunity for me to learn. Madison and Bryan are very experienced in the GTD class and in endurance racing. This is still relatively new to me. I’ve been able to run a couple of long distance runs in the past, but this is definitely adding to the log of information I need in order to end up in a program like Bryan is one day. Thanks to the guys for welcoming me to the team with open arms. I’m doing the best I can. There’s still areas where I can improve, and that’s part of it. For me, it’s all about keeping the car on the road and pointed straight. My job is to deliver Bryan and Madison a car that is perfect, and that’s my goal for this race. I’m looking forward to it.