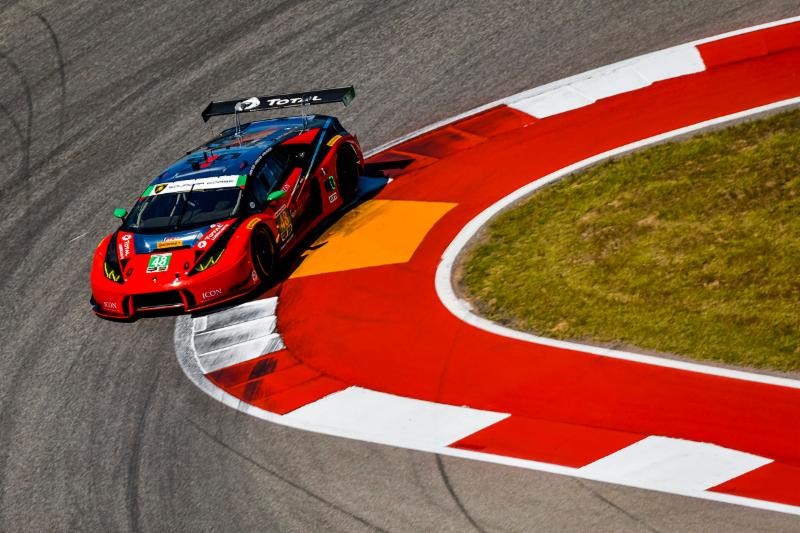 UPDATE: Due to a ground clearance infraction, the No. 15 car has been disqualified. The No. 48 Paul Miller Racing Lamborghini Huracán GT3 will start second.

Instead of focusing on setting a fast lap for qualifying, the team focused on giving the drivers a car to be fast over the course of the two hour and forty minute race. Snow set a fast lap time of 2:07.724, 1.193 seconds within the leaders. While positions one and two were over a second away for the rest of the field, positions three through 12 set fast lap times within a second.

The Advance Auto Parts Sportscar Showdown at COTA will start at 1:35PM Central, Saturday, May 6. Fans can watch live from inside the cars at imsa.tv, or watch the delayed broadcast at 7:00PM Eastern on FOX Sports 1.

Madison Snow
After getting out of the car and looking at the lap times, it’s a little funky how third place back, everyone is so tight, but first and second are gone. I had a good lap; I maybe had another tenth or two in the car. I did the best we could have done, and it gives us the inside line for turn one. The car is good. We really worked on making it raceable. When we first got there, the car was quick, but a handful. It wasn’t a car Bryan and I felt would be the best for us for the entire race. We made a lot of changes, and now we can drive it for the entire race. That’s going to be key here. The heat will wear down the tires, car, and drivers. The easier it is to drive, the better we’ll be at the end of the race. We hope to be within fighting distance of everyone else.

Bryan Sellers
Madison did a really great job in qualifying. It’s super tight outside of the top two cars. I’m not sure we have anything for the leaders at the moment. It’s important in these conditions when everyone is within a tenth, that we get the lap at the right time, and Madison was able to do that. Half a tenth of a second matters. We’re happy. Now we can go race, see what we have over the duration. We’ll play it by ear and see what happens. Everyone is pretty happy. The car is good, and we’ll go race.