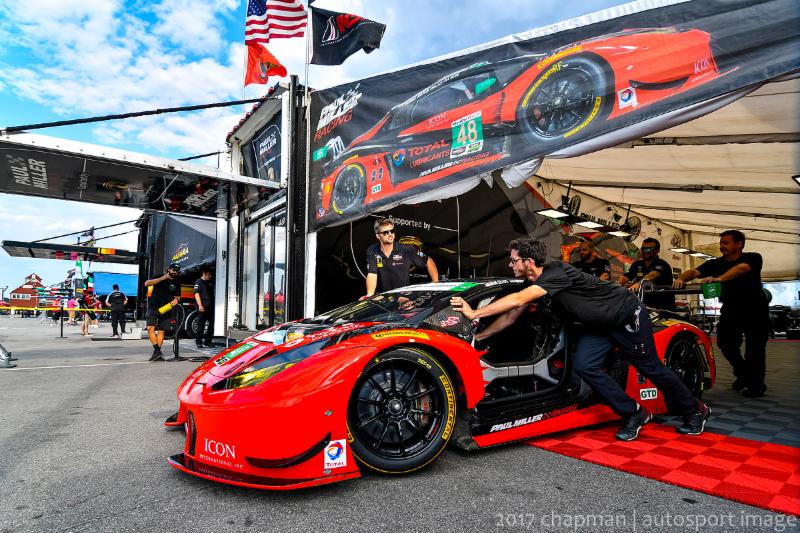 MONTEREY, Cal., (September 20, 2017) – As the 2017 IMSA WeatherTech SportsCar Championship prepares to draw to a close in the coming month, Paul Miller Racing is California bound for the Continental Tire Monterey Grand Prix. The Lamborghini Huracán GT3 team will travel 3,000 miles from home base in New Jersey to Monterey, California for the penultimate race of the 2017 season with drivers Bryan Sellers and Madison Snow.

As the final sprint race of the season, the Continental Tire Monterey Grand Prix will run two hours and forty minutes Sunday afternoon. Nestled in the hills of Monterey County, Mazda Raceway Laguna Seca offers 2.238 miles of paved road course, including the legendary corkscrew turn. Traditionally held in late spring, the event will run in early autumn. The significantly cooler temperatures will have an impact on car handling, tire grip, and overall set up, forcing every team to utilize each practice to fully understand the cars in varying conditions.

The 2016 Monterey Grand Prix was a learning experience for the No. 48 TOTAL Lubricants/UIS Lamborghini Huracán GT3 team. The team improved with every session, but still lacked overall speed during the race, resulting in a seventh place finish. The 2017 season has shown strong improvement, with two pole positions and two podium finishes to date.

The Monterey Grand Prix begins Sunday, September 24 at 2:05PM Pacific. The race will air live on FOX Sports 1 from 2:00PM to 5:00PM Pacific and international audiences can stream live at imsa.tv. IMSA Radio will cover the weekend on radiolemans.com and can also be found via the TuneIn app.

Bryan Sellers
Last year, Mazda Raceway Laguna Seca was a really difficult race for us. We put a lot of focus in the off season into figuring out what we could have done differently. We have made some progress over the year trying to address the issues we had. I am looking forward to getting there and gauging our progress on what we’ve learned. It’s getting very near to the end of the season, so it would be nice to get a good result.

Madison Snow
We head back to Laguna Seca a lot later in the year than we usually do, which can lead to quite a different story. The weather conditions always play a huge role into car setup and strategy. With lower temperatures than IMSA usually runs in there, it will be a completely different track than it was the last year for us. I am most excited about seeing what Paul Miller Racing as a team has improved over the last year and a half since we last raced there. Every team is constantly improving every race, and with what Bryan and I have learned as drivers through the last year, as well as with how Paul Miller Racing has improved as team, I am really excited for this race. I think we will be able to pull off an extraordinary run there this weekend!