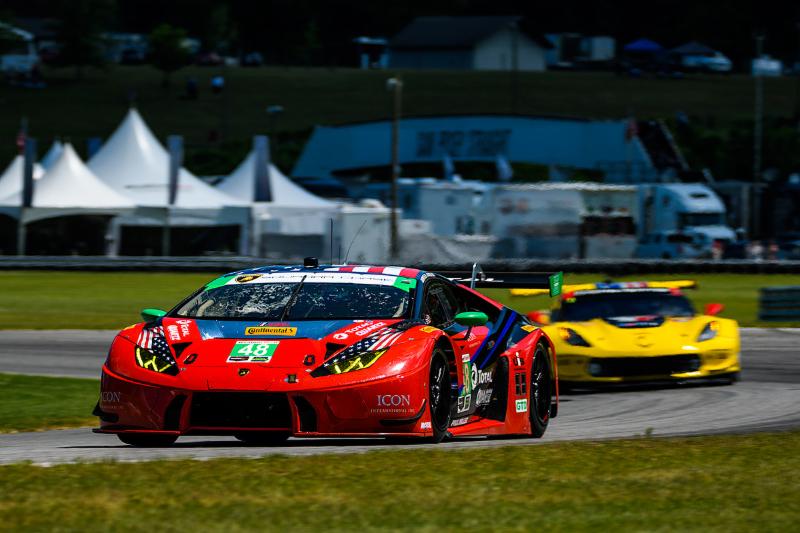 “We’re so excited because we really worked on having a good car in the long run,” said team owner Paul Miller. “When we were watching from the pit, we were surprised how much better we were than every other car in the long runs. Once we got to 20 laps, some of our closest competitors were dropping off, and we were surprised not only by how much, but that we were able to maintain pace. It was quite fun.”

Qualifying driver Bryan Sellers started the two hour and forty minute race in fourth position, and a full course caution in lap one held off the green flag racing for the first ten minutes of the Northeast Grand Prix. Restarting behind the No. 14 of Dominik Baumann, the No. 48 Lamborghini came alive as the race continued, and Sellers made quick work to pass the Lexus to take third position. He immediately pulled away to put pressure of the No. 15 of Jack Hawksworth in second, and assumed the second position as the second Lexus pitted for his first stop. Pat Long and the No. 58 Porsche held a 21 lead over Sellers as the Paul Miller Lamborghini charged forward in second, 42 minutes into the race. With 52 minutes of driving complete and two positions gained, Sellers finished his stint in second place, and Madison Snow took over the driving duties for the remainder of the race.

Quick work from the crew and a strategic call from the pit stand brought Snow into the fight in third, behind Long and Hawksworth, with Long still due for his first pit stop. With his strong lead, Long pitted and Christina Neilsen took over the No. 58 Porsche, joining the race in second position in front of Snow. With two additional laps complete, Snow’s tires were up to temperature to fight, and he quickly closed the 3.6 second gap, and the No. 48 Lamborghini passed the No. 58 Porsche to take second in lap 55. Although Hawksworth led by 10.2 seconds, the setup of the Lamborghini proved to be stronger over the course of the stint. Within ten minutes, Snow closed the gap to 6.9 seconds and with each lap grew closer and closer to the race leader. Once Snow caught up to Hawksworth, the Lexus pitted, and Snow assumed the lead with a nine second lead over Gunnar Jeanette in the No. 63 Ferrari.

The dependability of the Lamborghini and expert driving of Snow continued to move the leader forward, who created a 16 second lead over the field by the time he was called into the pits for his final stop of the race. Snow pitted from the lead for tires and his final tank of fuel, and rejoined in third. As the rest of the field made their stops and Snow continued to battle through lapped traffic and faster GTLM cars, he cycled to the lead, holding 26 second over Pat Long with 50 minutes remaining. Behind Snow, Long and Andy Lally in the No. 44 Audi battled hard for second position, allowing the young racer to continue to pull away.

Nerves in the pit box were at an all-time high in the final 15 minutes when a lapped car held up Snow, allowing Lally to trim three seconds off the gap. After seven minutes, Snow was able to pass the slower car, and pulled away to cross the finish line with 18.6 seconds over Lally. Saturday’s win not only extended the points lead in the 2018 championship, but it also awarded Paul Miller Racing their 40th IMSA podium in front of their home crowd.

“I’ve probably raced here myself over 30 times,” reflected Miller. “To be here with our employees and other guests, and win this race is just fantastic. We’re really excited.”

Only four races remain in the IMSA WeatherTech SportsCar Championship for the GTD class. August 3-5, the fight for the title will take place Road America, in Elkhart Lake Wisconsin, where Paul Miller Racing finished fifth in 2012, and fourth in 2013. For ticket and schedule information, visit imsa.com.

Bryan Sellers
It’s so hard to find words in moments like this. The wins don’t come often, so this is great. There isn’t a strong enough word to describe how today was. We had some issues early in the week, and the guys were able to fix it and get us moving to deliver a win to Paul in front of his home crowd at his home track. To watch Madison drive such a spectacular race is as rewarding. You want to be that guy that crosses the finish line when the checker falls, but today was the first time I was just as happy to see someone else do that. That was just as special. Hopefully we have a few more in us this year.

Madison Snow
It was a great race. Anytime you end up on the podium, it’s good, and when you win, it can’t get any better. Bryan gave me the car in a position where there was nobody around, so I just sat there and did laps. That’s a lot of pressure when you’re handed the car like that. You do everything you can to keep the car there and stay ahead. No matter how big of a gap you have to the people behind you, it’s never enough. You’re always nervous. You’re always thinking about that one mistake, or about a lapped car slowing you down. Even though you have a gap, you’re still pushing every lap. Everyone on the team performed flawlessly, and it’s great to be able to celebrate with Paul and the home crowd. 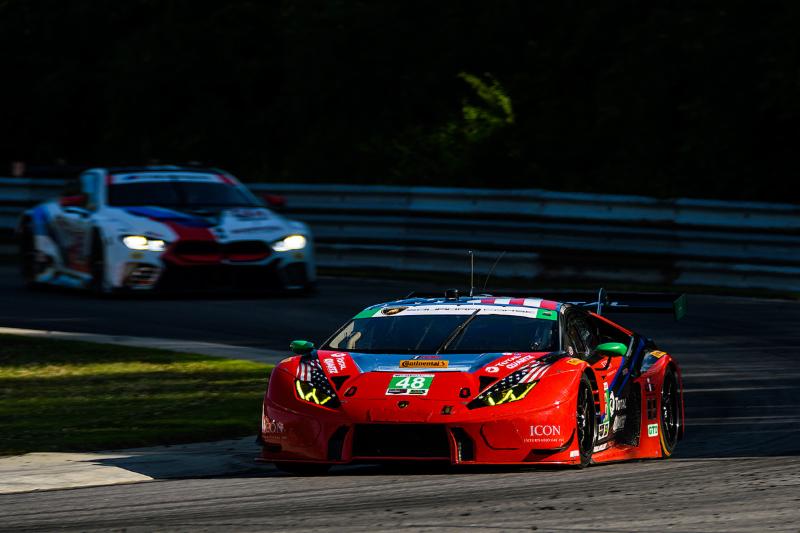