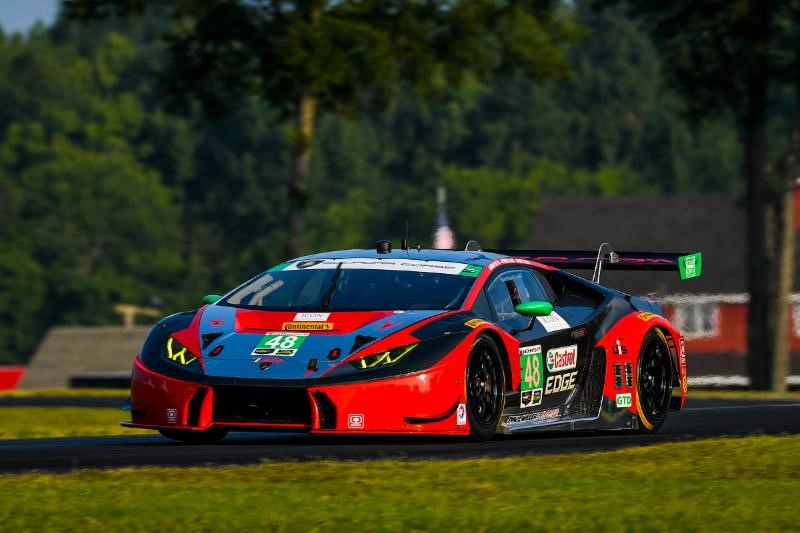 The pole was the first for Snow in IMSA WeatherTech SportsCar Championship competition and followed a top qualifying effort by co-driver Bryan Sellers in the No. 48 at Detroit in June, which was the first IMSA pole for Lamborghini.

“It’s been good so far,” Sellers said. “Certainly, you want to come in and lead every session, qualify on pole and win the race. Unfortunately, the hardest one is the last one and that’s what we have in front of us. We had a quick debrief after qualifying and I think up until this stage we’ve done everything we can do.”

“The car has been great, but we were wanting to make a couple of small changes to get it perfect,” Snow said. “We are worried that tire degradation was going to go on in the race, and what that would change for us – over steer or under steer – we didn’t quite know. So, in practice two we did a couple of long runs to see how the car worked and tried to get a setup for the race, but you definitely want to get a quick lap in too.”

In addition to being Lamborghini’s first and now leading pole-winning team, Paul Miller Racing also gave the Italian manufacturer its first and still season-best podium finish this year with a third-place showing at Canadian Tire Motorsport Park in July.

Now the No. 48 team wants to be the first to win a race for Lamborghini in IMSA.

“We have a pretty good race car and feel pretty good leading into tomorrow,” Sellers said. “We just have to go out and do the best job we can and if it’s good enough, we’ll be in good shape. We’ll just keep our heads down and keep trying and see where we end up at the end of the day on Sunday.”

Race-day Sunday starts with a 20-minute warmup at 8:05 a.m. EDT with the featured Michelin GT Challenge scheduled to start at 1:35 p.m. EDT for two-hours and 40-minutes on the 3.27-mile VIR road course.

– In addition to IMSA GTD, Paul Miller Racing, Sellers and Snow are debuting in the Lamborghini Blancpain Super Trofeo North America series this weekend at VIR. The co-drivers are sharing the No. 48 Universal Industrial Sales (UIS) Lamborghini Huracán LP 620-2 Super Trofeo in the weekend’s pair of races, the first of which got off to a competitive but short lived start Saturday morning. Starting from the back of the field after a minor and now corrected technical infraction, Snow charged by eight cars on the first lap only to see one competitor go off course as he moved past. Snow was clipped by the wayward car as he came back on track and was sent spinning into the grass. Both Snow and the No. 48 escaped relatively unscathed in the race-ending incident.

– Super Trofeo Race 2 begins at 9:50 a.m. EDT on Sunday with Sellers scheduled to start the race before handing-off the No. 48 Lamborghini Huracán LP 620-2 to Snow.

– Paul Miller Racing is the only GTD team to win a pole with each of its full-season co-drivers in 2016. The No. 48 is also the only GTD team this season to turn the fastest lap time in all practice sessions and win the pole on a race weekend.