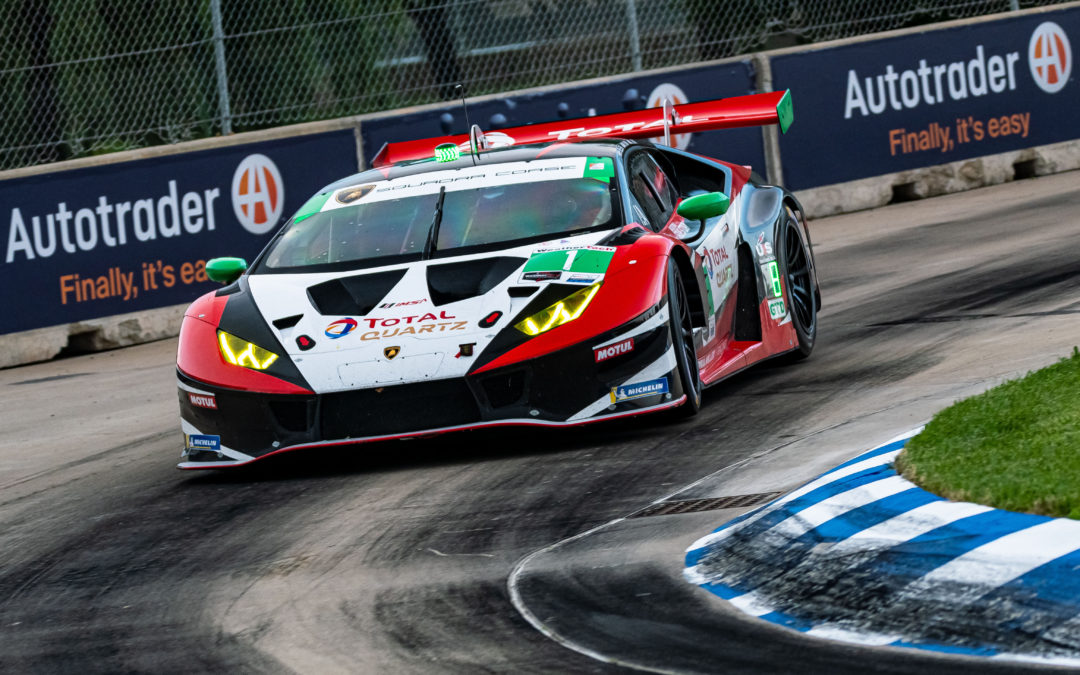 DETROIT, MI (Sunday, June 13, 2021) — After persevering through an engine change, a chaotic race start, and the Detroit heat, the Paul Miller Racing team’s promising weekend ultimately came to an unfortunate end when a penalty dashed their hopes of victory in Detroit.

Starting in the fifth position in the IMSA WeatherTech SportsCar Championship GTD class, Madison Snow made a stellar start in the No. 1 Total lubricants-backed Lamborghini Huracán GT3 EVO, advancing to the third position in just a few corners as cars made contact behind.

Following a brief yellow flag period early in the race, Snow began to challenge for second, as positions one through four in the GTD class ran nose-astern. As the train checked up under braking, the No. 23 Aston Martin behind Snow hit the right rear, pushing the Paul Miller Lamborghini into the Lexus ahead.

The team was assessed an incident responsibility penalty for the contact—despite video showing contact to the right rear from the Aston, and no other penalty during the race garnering a drive through—dropping the No. 1 Lamborghini to the rear of the field with very little time to make spots up in the series’ shortest race of the year.

Snow then handed the Huracán to co-driver Bryan Sellers, who battled his way up to seventh at the line. The team was promoted to sixth following post-race technical inspection. 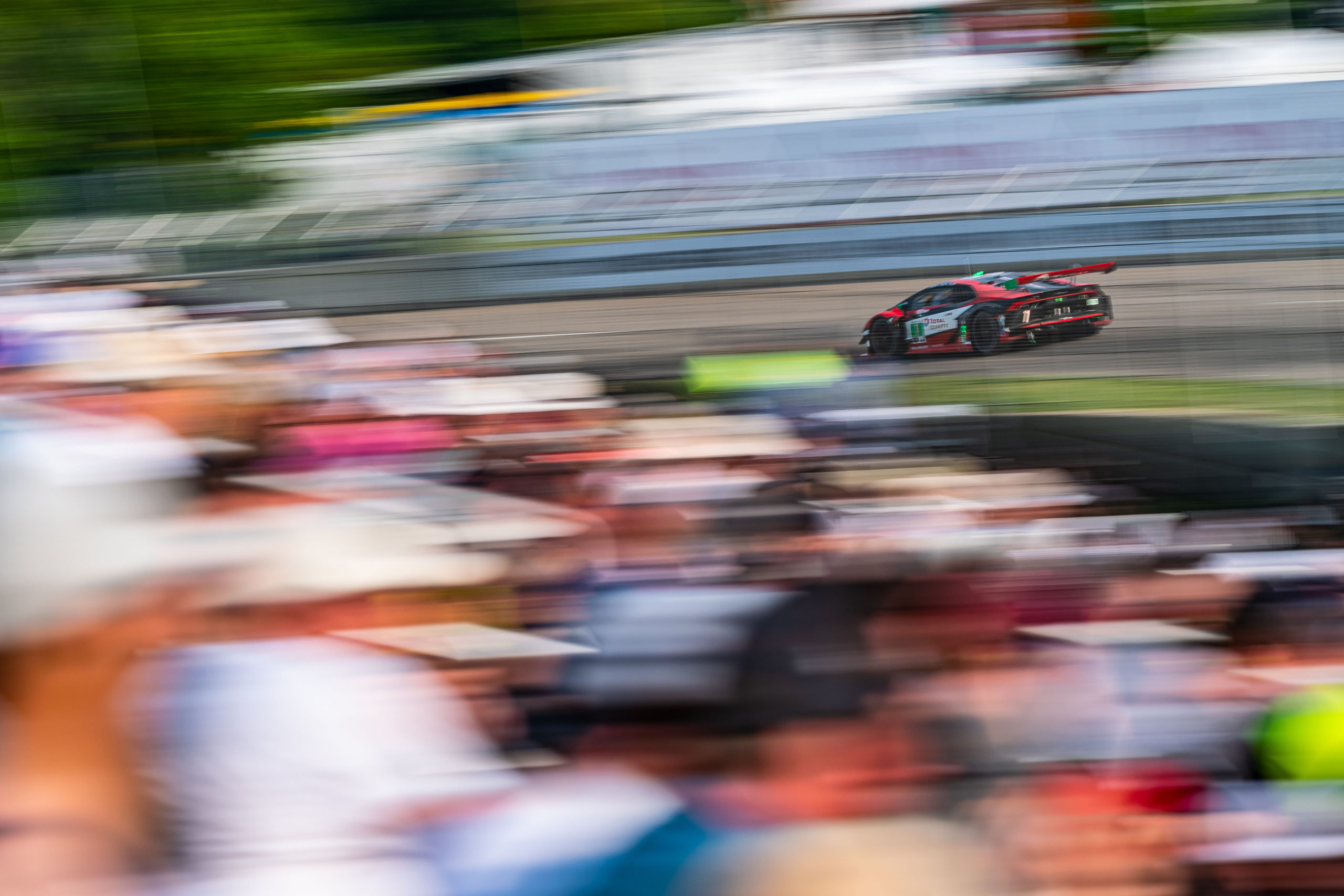 “I am incredibly proud of this team this weekend. The crew did a great job prepping the car, even with losing the second of only two practice sessions to the engine change, and Madison was fantastic at the start to get us up to third place.

“The penalty is really disappointing because both Madison and our spotter reported contact from the No. 23 behind that ultimately tipped him into the Lexus. And the damage to our car reflects that as well.

“But, thankfully, this race doesn’t impact our overall championship hunt, and we can move on and focus on Watkins Glen later this month.”

The IMSA WeatherTech SportsCar Championship returns to action at New York’s historic Watkins Glen International for the Sahlen’s Six Hours of The Glen on June 24-27. 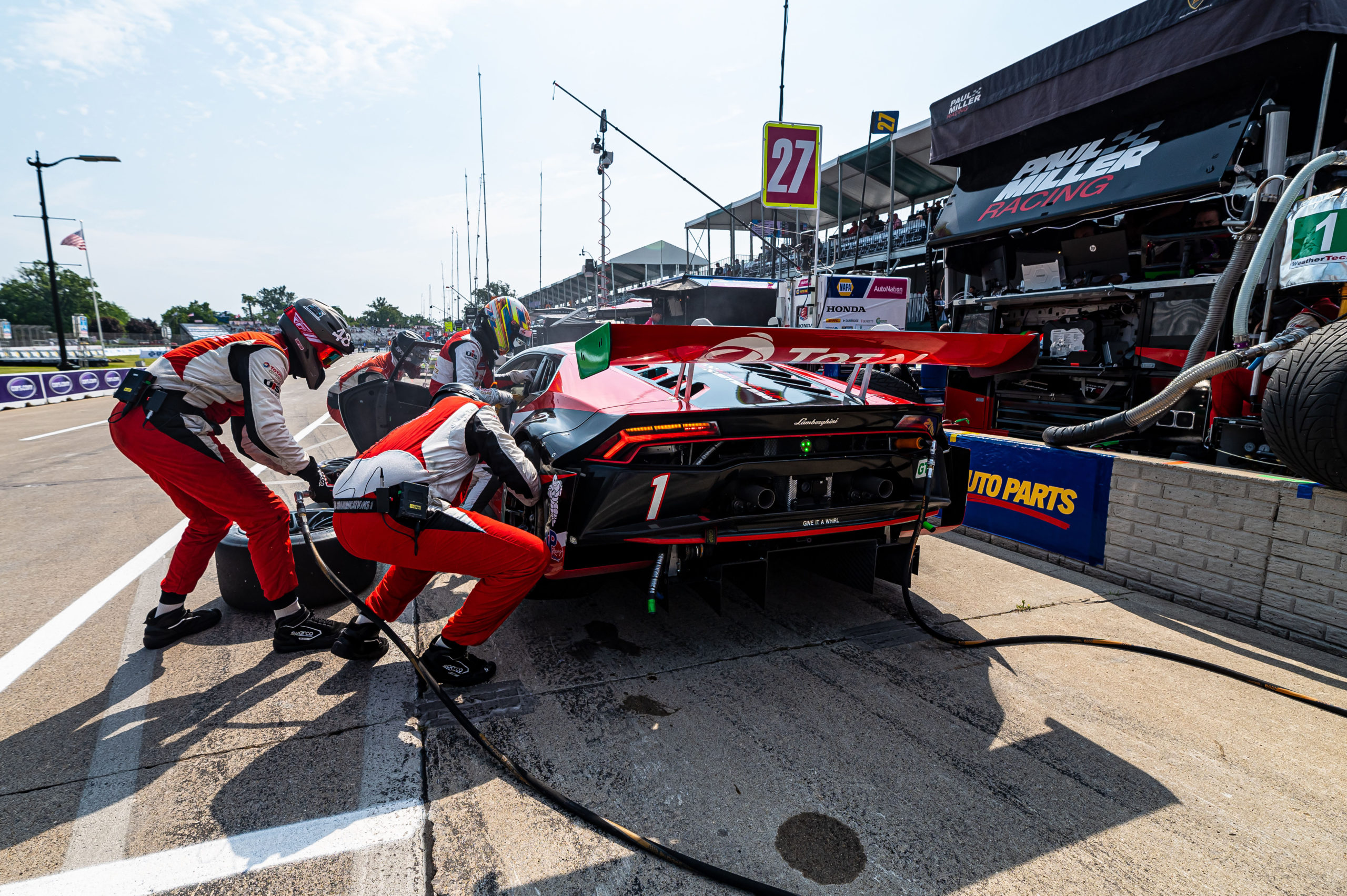 Madison Snow
“Days like today are hard to swallow. It’s difficult when you feel like the entire team has worked so hard, especially with the engine change this weekend, for it to end with a penalty that I don’t think we deserved. Before the contact with the Lexus, I felt the rear of the car lift up as we got pushed by the Aston behind, and I had nowhere to go.
“But, focusing on the positives, our crew worked so hard all weekend. The start was really fun, it’s hard to stay out of trouble on street courses, and it’s great when you can make up positions and keep your nose clean at a place like Detroit. Even though this race was a difficult finish, we just have to keep powering on through the rest of the season.”

Bryan Sellers
“Unfortunately, not the day we wanted. It was just a really difficult race for us. It felt like everything that could go wrong did go wrong, and that’s not normally how we operate at Paul Miller Racing. It was just a number of really unfortunate scenarios.
“I think Madison did a great job at the beginning of the race; he had an amazing start and kept out of trouble. And the guys did a good job all weekend, we came back from the motor change, and we were really competitive during the race. I just hate that it ends this way when you can’t give the team a good result back at the end. And it’s tough to be the guy in at the end that can’t give them that result as a thank you. I feel for everybody after this one. Hopefully, we bounce back at Watkins Glen and have a race that is more indicative of what we can do.”