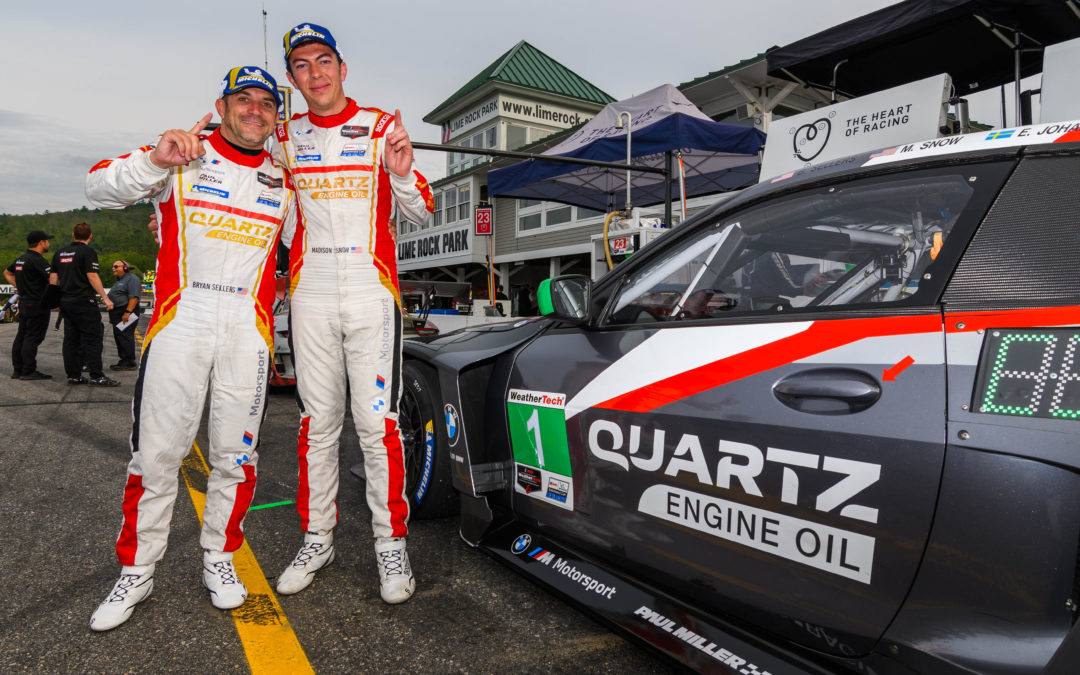 The team started in the seventh position in the hands of Madison Snow after a disappointing qualifying. However, Snow didn’t stay seventh for long, immediately moving into fourth place on the opening lap, and moving further into third place by the end of the first stint.

Utilizing an alternate strategy, the No. 1 Quartz Engine Oil-backed BMW M4 GT3 pitted a few laps earlier than its competitors—before the minimum required drive time for each driver was met. While the team was able to leapfrog into the lead, that put Snow out on track with the ‘Pro’ drivers in each car. Holding his own as the only ‘Am’ driver on track, Snow would lead 34 laps before handing over to co-driver Bryan Sellers.

Sellers would spend most of his half of the Northeast Grand Prix in fourth place, before he got his chance on a late-race restart. Restarting P4 with under 10 minutes to go, Sellers passed his way up to third in the first corner and into second the following lap.

Then, just like the podium finish at Lime Rock last year, the Paul Miller Racing team got a little bit of divine intervention. The No. 57 ahead suddenly slowed, with Sellers avoiding the car and moving into the lead with just a straightaway left to the checkered flag. 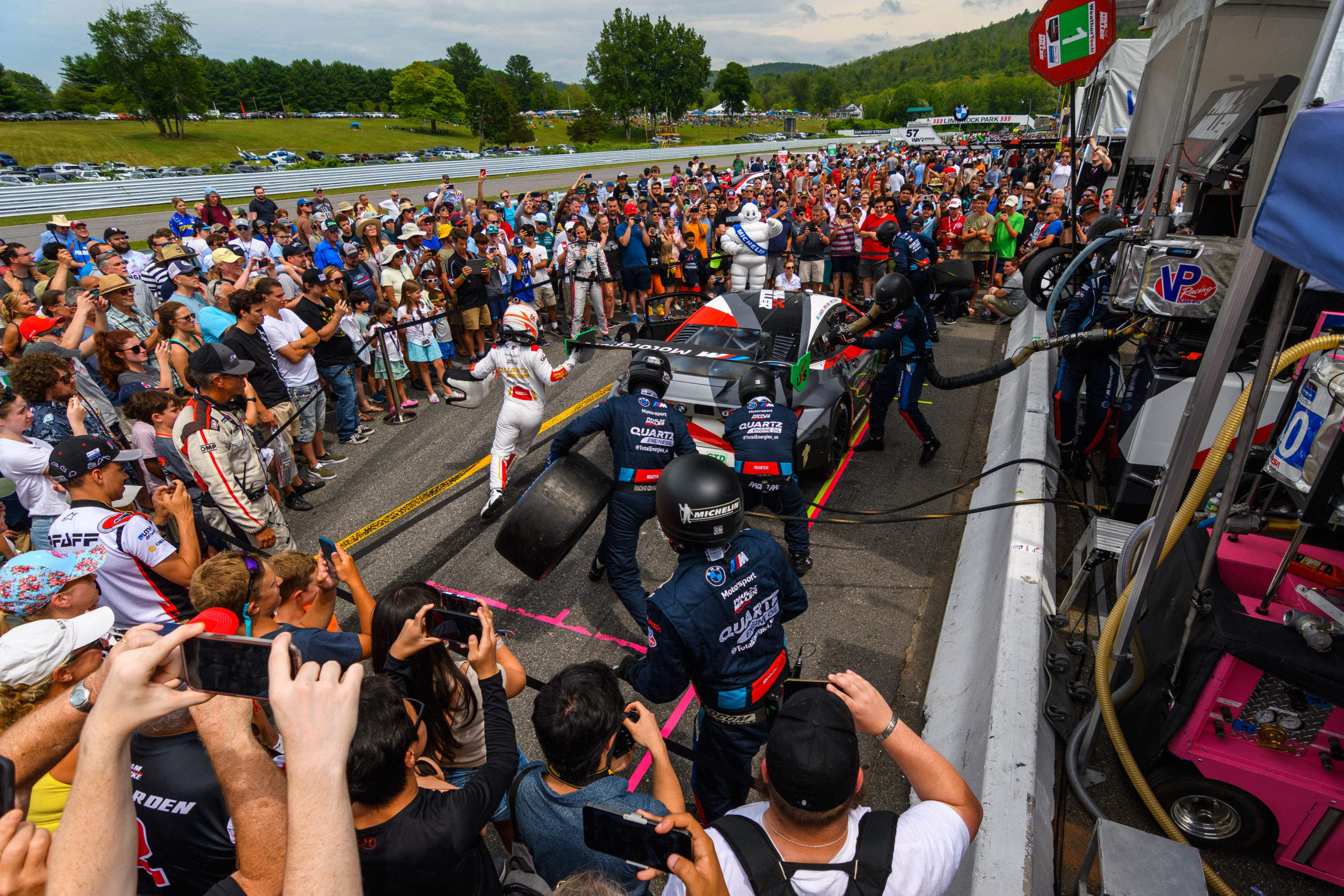 The win marks the Paul Miller Racing team’s second victory of the year, following a dominant performance at the Long Beach Grand Prix in April. This win is particularly important for the team as Lime Rock Park is the home event for the Paul Miller Auto Group, with many guests, employees, customers, and their families making the drive to see the team race.

“We said we might need a little bit of divine intervention, and we got it!” Paul Miller Racing team owner, Paul Miller, said.

“This race means a lot to all of us here, not just on the race team, but on the dealership side as well. I’m so glad we could all share this moment and share this win together.

“Our drivers drove flawlessly. The strategy was the right call given our track position and our car. And the crew executed incredibly well on pit stops. I think we were all stunned watching that last corner, but stunned in the best way!” 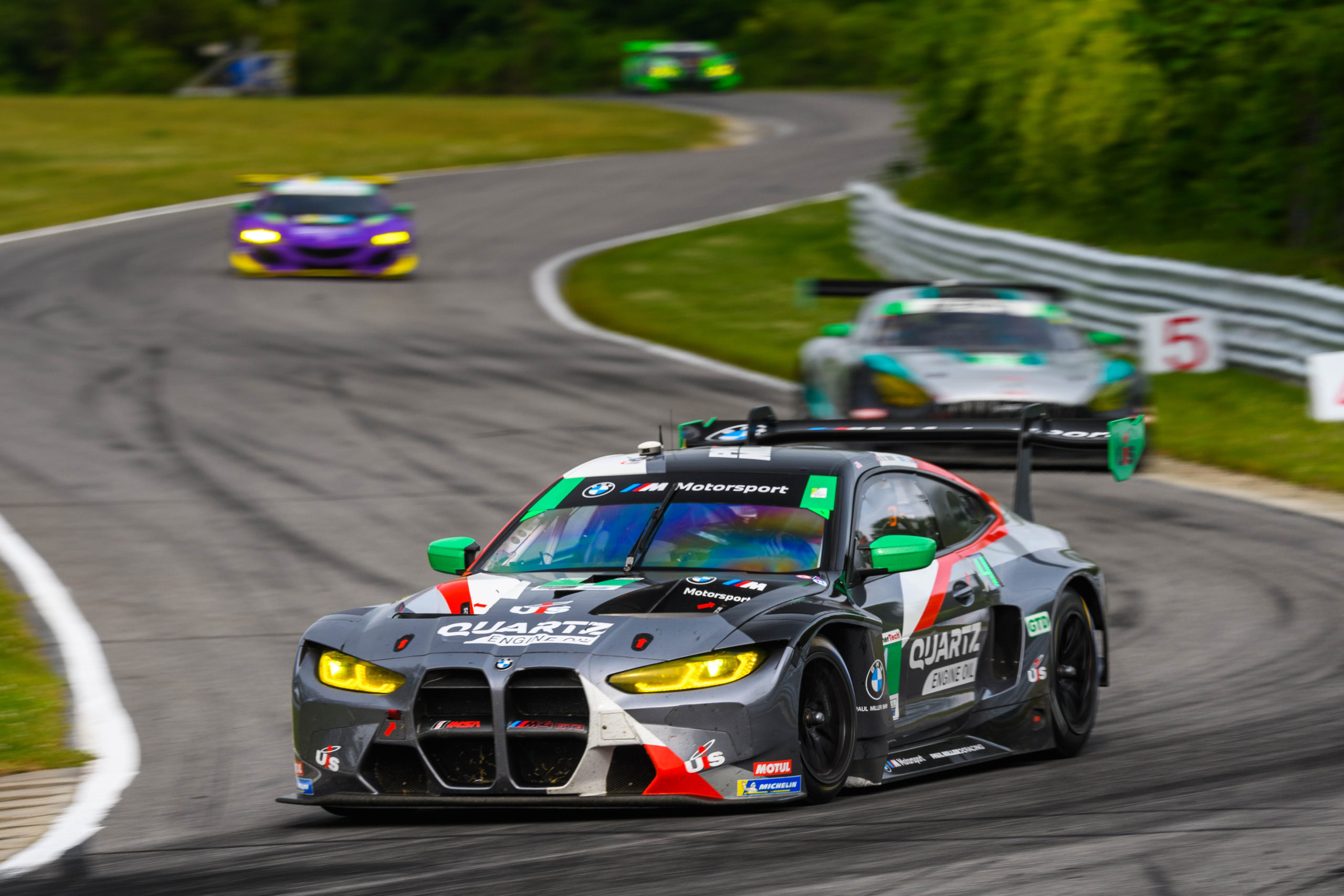 The victory at Lime Rock Park extends the Paul Miller Racing team’s lead in the Sprint Cup—a championship-within-a-championship for races two-hours, 40-minutes or less. The No. 1 crew now leads by 212 points (2039 to 1827) over the No. 27.

“Usually I congratulate the crew because those guys work their butts off, but this was a race that was all about our drivers,” Paul Miller Racing team manager, Mitchell Simmons, said.

“Madison and Bryan deserve all the accolades today, and our strategy would not have worked if they weren’t able to make moves on the start and on the restart, or make the most of clear air and fresh tires after we pitted.

“The crew also did a great job today, but the drivers were the ones that really put us in a position to take home this win at Lime Rock.”

The Paul Miller Racing team will be back in action the first week of August when the IMSA WeatherTech SportsCar Championship heads to the National Park of Speed, Road America.

Madison Snow
“Winner winner, chicken dinner! That was great. The race definitely had its ups and downs—the start was fantastic, but after that, I was stuck behind the No. 27 for a little bit. We ended up pitting to get clear track; that was a great call from the timing stand. It allowed us to run everything we could to get ourselves a gap and ensure we came out of some other cars when we pitted again because it’s so difficult to pass here on the track. The next stint, the car was great, the tires were great, I just had to run as hard as I could. The middle of the race, we really weren’t sure how this strategy was going to end up; we thought we might just finish fourth. But, then we went yellow. Luckily for us, Bryan is great on restarts, and it certainly proved that again today. We got a little bit lucky on that last lap, but at the end of the day, we still won Lime Rock!”

Bryan Sellers
“Super excited! I don’t know what else there is to say. We definitely did not have a car that was fast enough to win today, but these are days where things just sometimes fall your way. Madison put us in a place to win for sure. We came off a seventh-place start, and he immediately drove us to third. We had a good pit stop because we knew he had the pace to be able to continue on against the ‘pros’. He maintained that gap that put us in a position to win. There were a lot of other things that still needed to fall our way in the second half of the race. Everyone had to do their job in the final two stops, I still had to do my job around a lot of fast race cars. There were a lot of adaptations we had to make strategically through the race, and then it came down to the restart. Sometimes just open up for you, and you get to take advantage of them, and luckily we were in position to do that! I’m just super happy for the guys, super happy for everyone.”