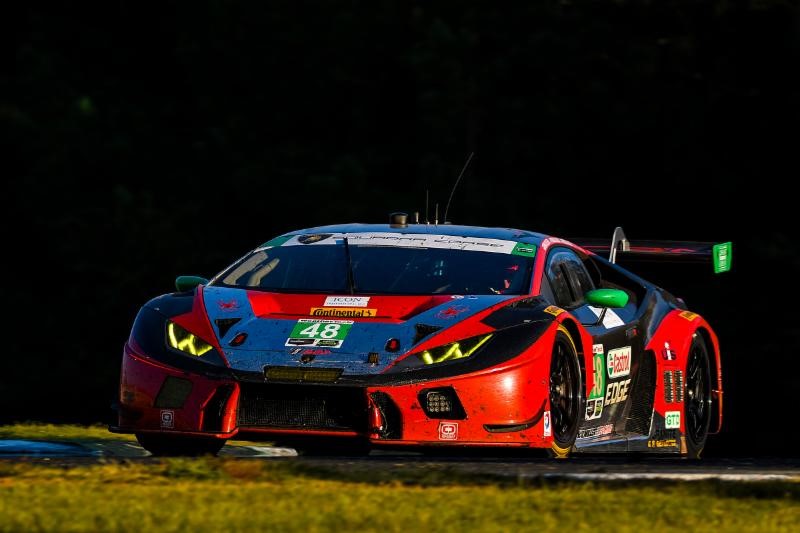 The fifth-place race result – Paul Miller Racing’s fifth top-five finish in the year’s final six races – was a hard-earned comeback performance for the No. 48 team.

Paul Miller Racing is the only team in IMSA to have finished in the GTD championship top-three each of the three years the class has been in existence.

“A few races ago, we were in seventh-place in the championship,” Team Owner Paul Miller said. “So, for us to finish third – even though it wasn’t necessarily because we did everything perfectly on Saturday – is really satisfying. We are really excited about having finished third for the season in the standings in our first year with Lamborghini. I am really proud of the team, proud of the guys, Bryan did a great job, Madison was awesome all year, and Bryce came in here and really did a great job at Petit Le Mans.”

A second Petit Le Mans race win – Paul Miller Racing won the GTD class in the 2014 race – never seemed quite in the cards this weekend at Road Atlanta, but everyone on the team knew that every single race position gained would bring them closer to a championship podium result.

“Ultimately, our goal was to come away from this weekend with a podium position for the championship and we were able to do that,” Sellers said. “With the difficulty we faced early in the season, and the challenges we had at Petit Le Mans yesterday, to be able to claw our way back to P3 in the championship is a great accomplishment.”

Qualifying driver Snow started the race in the No. 48 Lamborghini Huracán GT3.

“Going into the race Bryan and I knew it would be a real lucky chance if we were able to get on the podium,” Snow said. “We didn’t quite have the pace of some of the competition but we figured we could get there if we had a little bit of good luck. We were pushing hard but we definitely had some luck go the opposite way in the race.”

The No. 48 team fell nearly two laps down in the first half of the race after being caught in the pits for a lap after a left-rear wheel well repair. Further time was lost serving a drive-through penalty for what was determined by IMSA to be an avoidable contact incident with another competitor.

“It was another great team effort,” Sellers said. “The guys fought us back from over a lap down and put us in a position to race at the end. I am really proud of all our guys and all of the team work that went into this season and yesterday’s race.”

Bryce Miller, racing with the team in this year’s four endurance races, kept the No. 48 in the hunt in his opening stint and capably helped make up some of the lost ground in his second shift in the Lamborghini.

“It was very important to me to do my job and fill my role in helping the team, Bryan and Madison get a spot in the championship,” Bryce Miller said. “The team was really hitting its stride at the right time and I had to make sure I kept them moving forward and didn’t do anything to put their championship pursuits on the line. I am very happy to do my part in getting the team, and Bryan and Madison, a championship podium spot they really worked hard to achieve.”

Shaking off a forgettable season-opening Rolex 24 At Daytona, the Paul Miller Racing team persevered to improve throughout the season.

Sellers and the team gave Lamborghini its first pole at Detroit in June and, two races later, he and Snow co-drove to a third-place finish at Mosport in Canada to deliver the first podium to the Italian manufacturer.

The major breakthrough came in August at VIRginia International Raceway (VIR) where the Paul Miller Racing team won from the pole in a dominating performance that marked Lamborghini’s first IMSA win.

A second-place finish one race prior to Petit at Circuit of The Americas (COTA) moved the No. 48 and drivers into fourth-place in the IMSA GTD standings, one of six teams separated by just 11 points that battled it out for the last two championship podium spots in Saturday’s race.

The final third-place championship result is the highest Paul Miller Racing has been ranked in the GTD title battle all season.

Paul Miller Racing has already committed to a second season with the Lamborghini Huracán GT3 in 2017.

“We feel like we have developed a tremendous sense of trust between us and the people running the program, Chris Ward and Giorgio Sanna,” said Paul Miller. “It’s a great relationship and we have really enjoyed it, particularly these last few months.”

Next up for Paul Miller Racing is Monday night’s IMSA WeatherTech Night of Champions at Chateau Élan Resort and Winery, nearby Road Atlanta in Braselton, Georgia, where the team and drivers will be presented with their championship awards.

– In addition to the third-place GTD championship presentations at the IMSA WeatherTech Night of Champions celebration, Sellers will be honored as an inaugural recipient of the Continental Tire Extreme Spirit Award in the GTD class.

The new award is presented to a driver, selected by a panel of judges, in each IMSA class that has “best demonstrated great respect for fellow competitors, sponsors, track operators, officials, media and fans throughout the 2016 season. They act as ambassadors for IMSA on and off track and show an ability to accept victory with humility and defeat graciously. They also display the positive qualities of sportsmanship and have a commitment to excellence that is second-to-none. Their on-track performance speaks for itself while their off-track efforts are revered.”