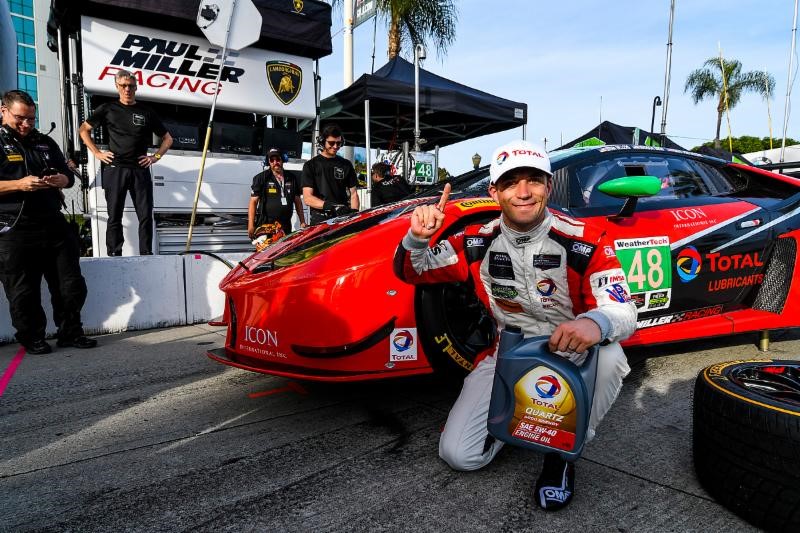 LONG BEACH, Cali., (April 7, 2017) — After finishing in first for both practice sessions in the IMSA WeatherTech SportsCar Challenge GTD class the No. 48 Paul Miller Racing Lamborghini Huracán GT3 qualified in first place for Saturday’s BUBBA burger Sports Car Grand Prix at Long Beach. Drivers Bryan Sellers and Madison Snow shared the driving duties in the opening sessions to perfect the car’s qualifying set up with the engineers, resulting in a successful qualifying attempt.

Sellers and Paul Miller Racing’s last pole position was won on another street course, at the Detroit Grand Prix in 2016. This afternoon, Sellers earned his first Long Beach pole position in lap 10 of his 11 lap run, setting the fastest lap by 0.033 seconds. The success of winning the TOTAL Pole Award marks a special moment for the team, who is also partnered with TOTAL Lubricants for the 2017 season.

“To get on pole at Long Beach is really exciting,” said Sellers. “I have been close a couple times and have never been able to get there. It is a little extra special for us, having TOTAL on board as a team partner, and get the TOTAL pole award makes it even better. It was a lot of work, and the guys did a great job.”

In preparation for Saturday’s race, the team will get to work on the final set up changes on the Lamborghini Huracán GT3. Sellers will lead the GTD field to green before giving the wheel to Snow to finish. The race will air at 4:00PM Eastern, live on FOX, Saturday, April 8. International fans will be able to watch worldwide at imsa.tv. Additional audio coverage will be available via IMSA Radio at www.radiolemans.com.