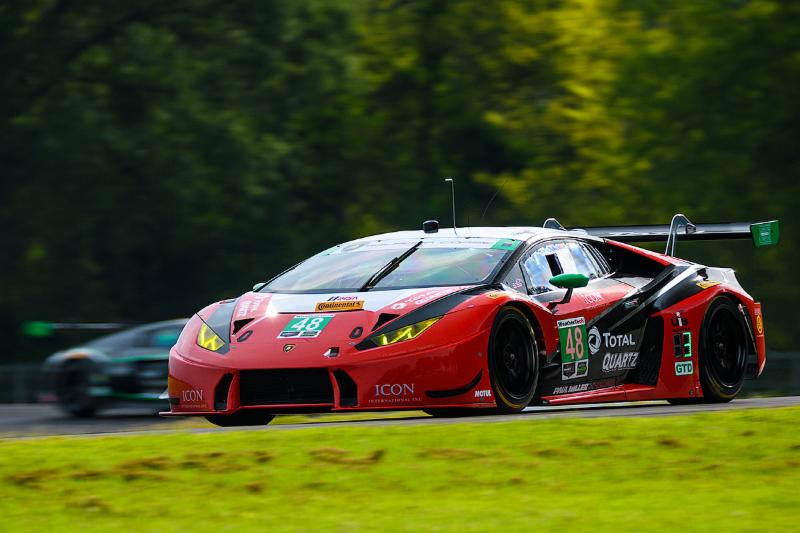 The IMSA WeatherTech SportsCar Championship GTD class started the fifteen minute qualifying session under sunny skies. Eight minutes into the session, Snow was putting in a fast lap, looking to climb up the charts from fifth place to secure a better starting position for Sunday’s race. The skies opened with six minutes remaining, releasing rain first on the front stretch of the track, then throughout the Alton, Virginia course. Opting not to put on rain tires in the few remaining minutes, the competitors pitted and waited out the checker flag.

Despite the weather interruption, Snow still put in a strong lap to start fifth, an impressive task since the team was unable to participate the first two practice sessions. The No. 48 Lamborghini underwent a motor change on Friday afternoon, and made a remarkable weekend debut in the top three positions in the final practice on Saturday. A testament to the team, the No. 48 looked strong in the GTD qualifying session, putting in competitive lap times before the rain hampered the session.

The live broadcast Michelin GT Challenge at VIR will begin on Sunday, August 19 at 2:00PM Eastern on FS1, then switch to FS2 for 2:00PM to 4:00PM. International audiences can steam the race live in its entirety at imsa.tv, and IMSA Radio will provide live coverage online and via the TuneIn app worldwide. For full event information, visit imsa.com.

Bryan Sellers
It was a good qualifying session for us. Unfortunately we got caught a little out by the weather. Madison was on his good lap and we had some rain come down, but all in all, it was a solid qualifying session. I’m interested to hear what he had to say about the car and the balance so that we can make changes for tomorrow’s race. We’re about where we thought we’d be. I think we have a good race car and tomorrow is what matters.